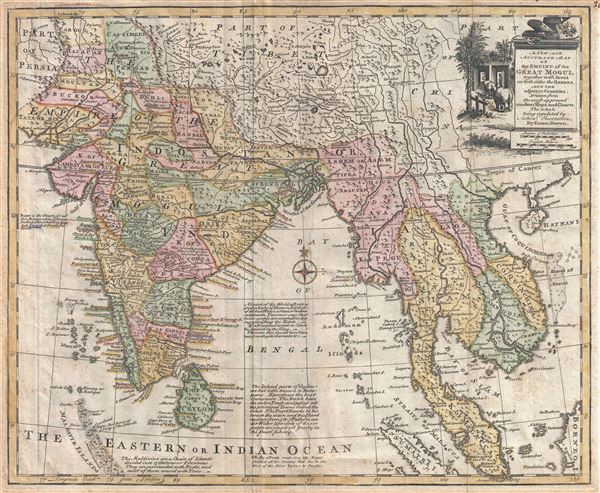 A fine 1744 map of India and Southeast Asia by the English cartographer Emanuel Bowen. The map covers all of India and Southeast Asia including the modern day nations of India, Sri Lanka (Ceylon), Burma (Pegu), Thailand (Siam), Malaysia (Malacca), Singapore, Cambodia, Laos, Vietnam (Tonquin and Coquinchina), and Laos. Nepal, Tibet, Bhutan, and parts of China are also included. The map extends south as far as Singapore and the Maldives. The map offers some offshore detail particularly in the vicinity of the Maldives and off the cost of South Vietnam. The island of Singapore is specifically identified. There are several interesting annotations in English that describe trade, natural resources, and regional culture. A note, for example, situated near Bombay, India, reads

Surat is the Staple for all the Merchandise of Europe, India and China having English, French and Dutch Factories.

A decorative title cartouche in the upper right quadrant shows elephants being herded. This map was published as plate no 26 in the 1744 edition of A Complete System of Geography.

Bowen, E., A complete system of geography. Being a description of all the countries, islands, cities, chief towns, harbours, lakes, and rivers, mountains, mines, &c. of the known world …, 1744 edition.     A Complete System of Geography was published in London between 1844 and 1847. Comprising two volumes the work claims to be an updated and expanded versions of Herman Moll's Compleat Geographer. The two volume set contained roughly 71 maps in addition to extensive descriptive text. Most of the maps and text within were composed by Bowen and several, especially those of parts of Asia and America, are important. Some editions were published by William Innys and others by Bowen's son-in-law Thomas Kitchin.