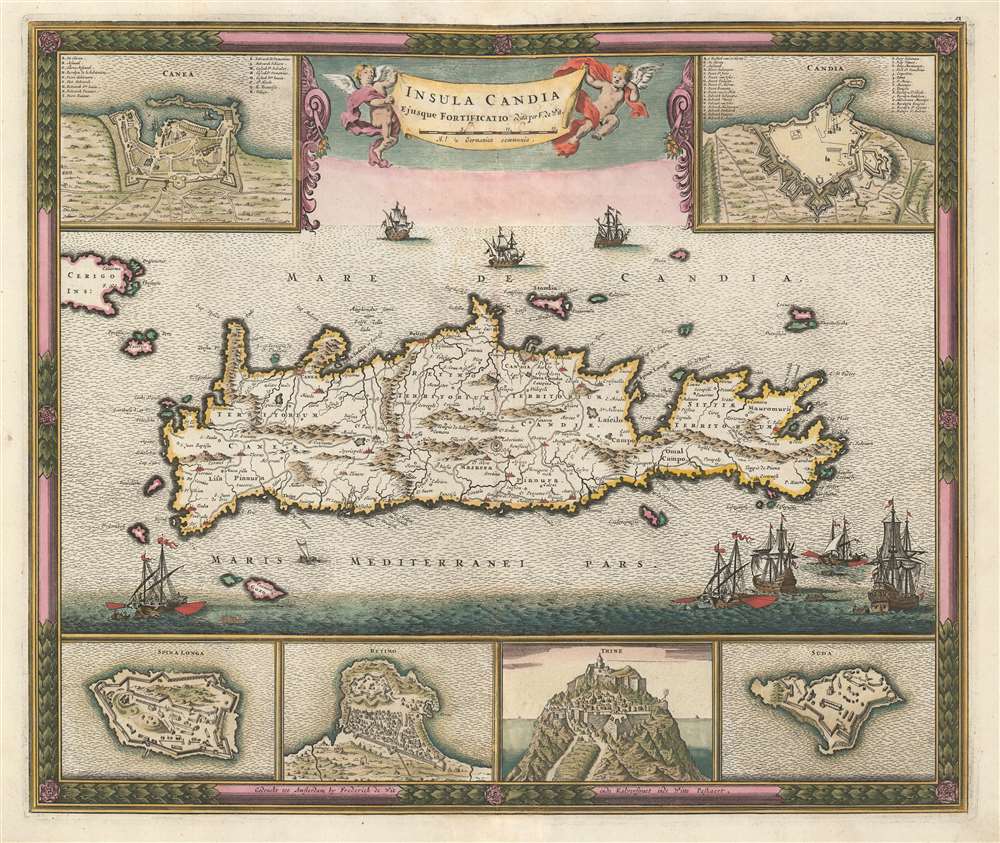 Created after the Ottomans conquered Crete, removing it from Venice's overseas empire.

This is a c. 1680 Frederik de Wit map of Crete only years after the end of the Cretan War, which is also known as the Fifth Ottoman-Venetian War. Based on a map created by Sébastien Pontault de Beaulieu, the map depicts the entire island after the end of the Siege of Candia, a 24-year long siege of a fortress on Crete. Candia, along with myriad other cities, towns, and villages are labeled all across Crete, and roads, rivers, and mountain ranges are also illustrated. Six inset maps are placed along the borders that focus on Crete's fortresses at Canea, Candia, Spina Longa, Retimo, Thine, and Suda, a natural inclusion since Pontault de Beaulieu is known for his work illustrating Mediterranean fortifications.

The Cretan War and the Siege of Candia

The Cretan War, or the Fifth Ottoman-Venetian War, lasted from 1645 - 1669 and focused largely on the island of Crete. The Ottomans had designs on annexing the island, the jewel of Venice's overseas empire, which Venice strongly opposed. The Ottomans had successfully captured all of Crete, except Candia and a few island strongholds, by the beginning of 1648, a total of three years. The rest of the war was occupied by the siege of Candia, which lasted from May 1648 until September 1669, when the Venetian general made the decision that the city could no longer withstand the Ottoman assaults and decided to capitulate.

As the siege began to set in, it became clear to both sides that the critical element to victory would be the ability to curtail and cut off the other side's access to supplies from the mainland. Venice was unable to match the Ottoman's land forces, but the Venetians more than bested their enemy's navy. This precipitated a series of naval engagements, none of which were ever decisive, ultimately leading to years of stalemate, exhaustion, and disease among the forces on Crete. Throughout the war, the forces of Christendom, led by the Papal States and France, provided much needed logistical and military support to Venice. Ultimately, however, it would take the sound defeat of French reinforcements by the Ottoman army in 1669 to force the Venetians to sue for peace. The Venetians had believed that these reinforcements would produce a handful of victories and create a more beneficial state of affairs for negotiation, but that is not how events played out.

This map was created by Frederik de Wit and published c. 1680. Per the OCLC, it is present in about a dozen institutional collections, and it is scarce on the private market.


Sébastien Pontault de Beaulieu (1612 - 1674) was a French engineer who is considered to be the first military topographer. Active during the reigns of Louis XII and Louis XIV, Pontault de Beaulieu is more accurately considered to be the creator of military topography and is best known for systematic plans of battles, sieges, military expeditions, and other affairs dealing with the army during this time period. He joined the army at fifteen during the siege of La Rochelle (1627 - 1628) and also saw combat at the siege of Arras, the siege of Perpignan, and the siege of Dunkirk, among others. His major work is entitled Les glorieuses conquêtes de Louis le Grand or Recueil de plans et sues de places assiégés, et de celles où se sont données des bataiiles, avec des discours Learn More...