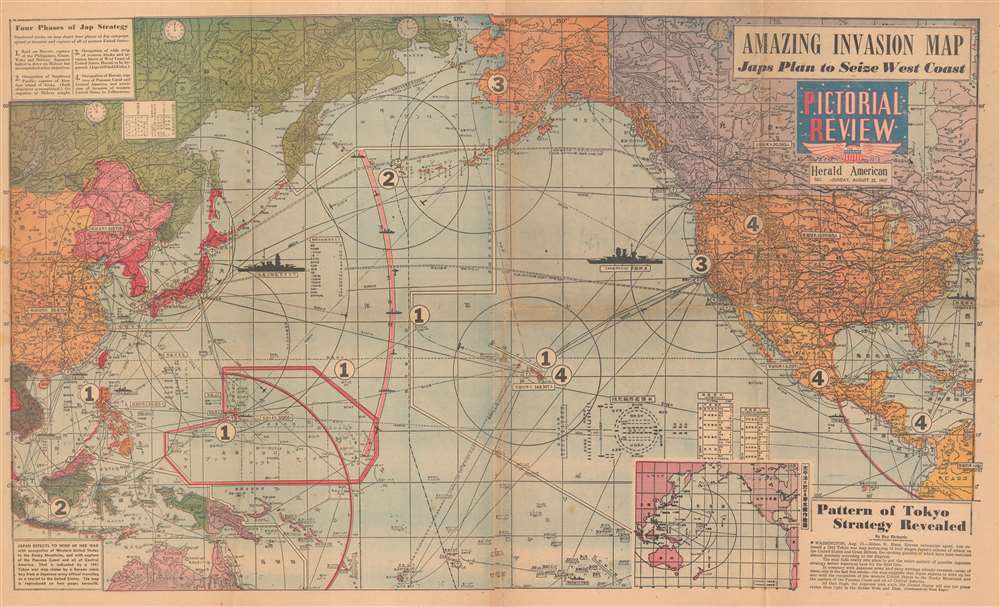 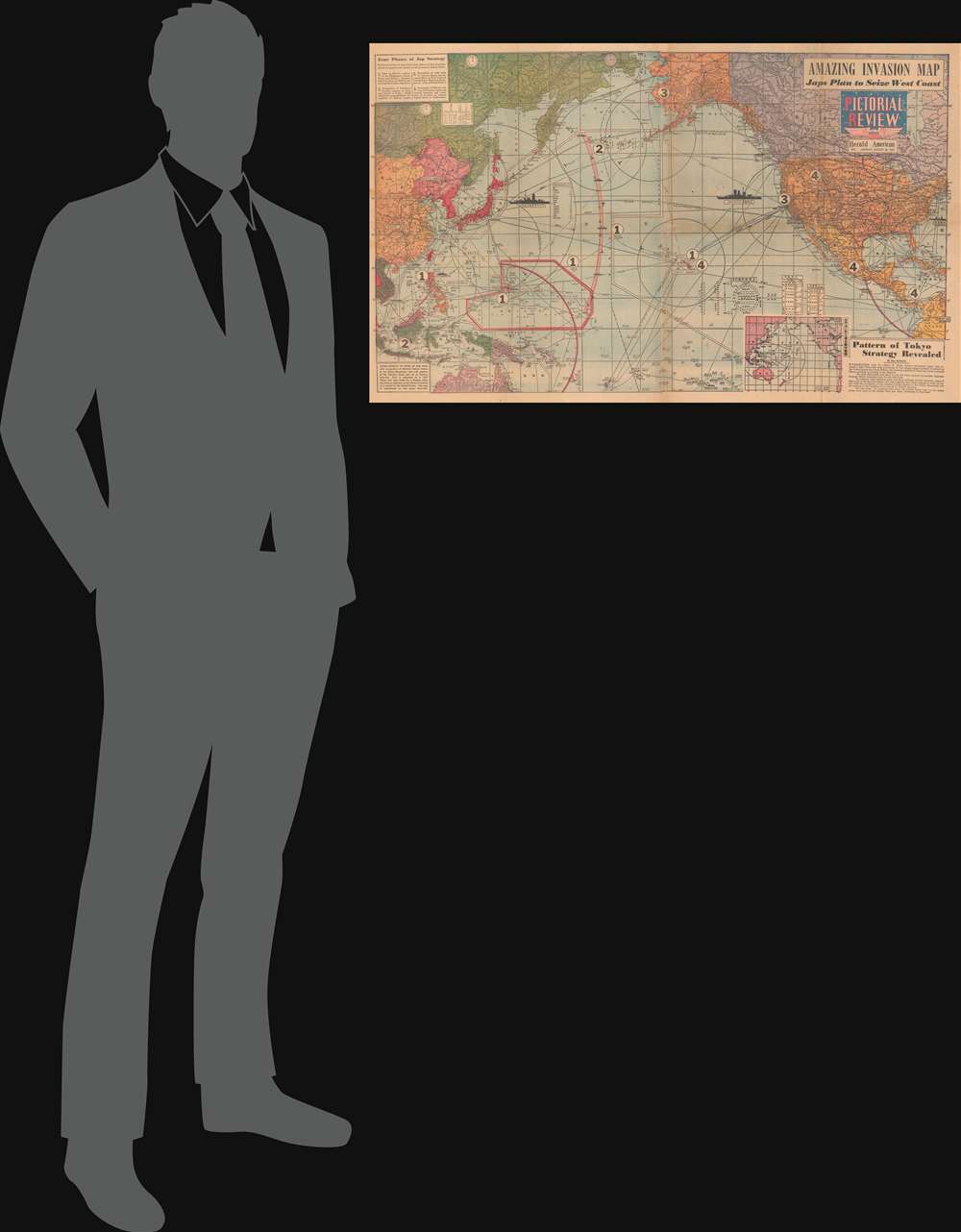 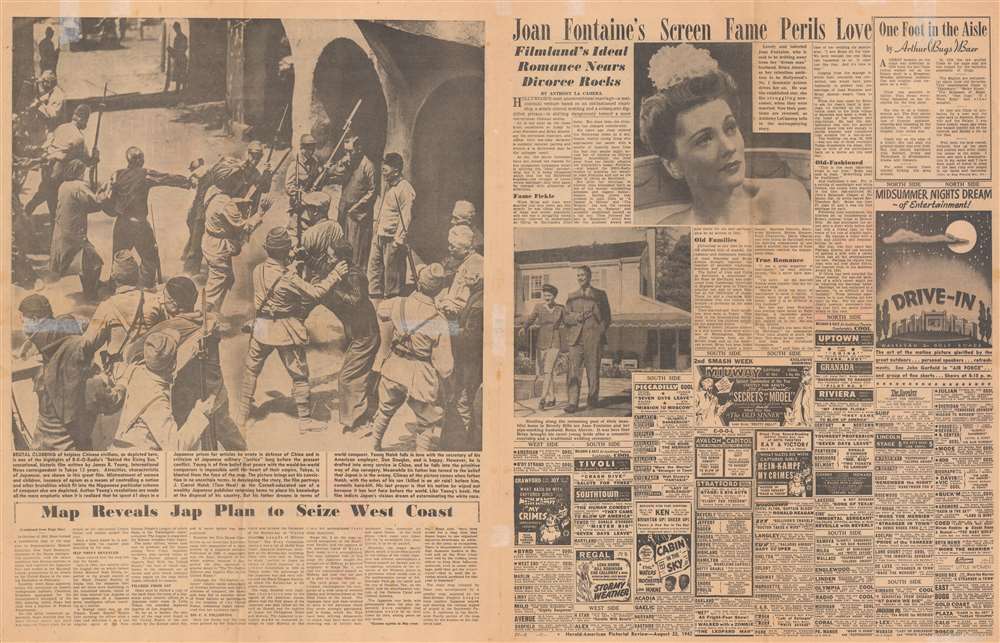 Japan's plan for the Pacific War, warned of in advance, revealed to the American public.
$1,250.00

This is a remarkable 1943 map of the Pacific Theater tied up with espionage and intrigue. The map was published in the Herald American Pictorial Review, showing a prewar Japanese plan to attack Pearl Harbor and the West Coast of the United States. The map was stolen from a Japanese officer by a Korean attendant on an ocean liner in 1941, passed on to members of the U.S. Congress (where it was practically ignored), and finally published in the American press in August 1943 (well after the fact).

From the Japanese Press to the U.S. Congress

This map was originally published in the January 1935 edition of King (キング) magazine, a popular general interest monthly in Japan, and then republished in the Herald American Pictorial Review and a handful of other newspapers on Sunday, August 22, 1943. According to the paper, the map was stolen by a Korean cabin boy from a Japanese military officer traveling to the United States on a luxury ocean liner in 1941. Then, it passed on to a Korean American activist and spy in Washington D.C. named Kilsoo Haan (한길수), who then shared the information with Rep. Samuel Dickstein (D-NY) in October 1941, warning that a Japanese attack on the United States was imminent.

It is remarkable that Japanese war plans would be so publicly revealed years in advance, but it is important to point out that many countries had war plans in these years which were not entirely secret (such as the U.S. 'War Plan Orange'). Even by 1935, worsening relations between Japan and the U.S. and the militarist-nationalist turn in Japanese domestic politics made a future war likely. The 1941 map that was published in the American press in 1943 diverges slightly from the 1935 original, with different insets, less emphasis on the forces of the Soviet Union and European powers, and updated lists of the number and types of ships in the American fleet. Most notably, the 1935 map did not have numbers indicating phases of a grand invasion plan.

Haan was born in Korea and raised in Hawai'i. He worked at the Japanese consulate in Honolulu in the late 1930s, which later caused some in Washington to doubt his reliability as a source. Afterwards, he founded a group called the Sino-Korean People's League, became an inveterate anti-Japanese voice in the American press, and claimed to have a highly organized network of Korean spies throughout the Japanese empire.

He translated a 1940 book by an ultranationalist Japanese naval intelligence officer named Matsuo Kinoaki (松尾樹明), who was also a chief propagandist of the militaristic Black Dragon Society (黑龍會), an organization to which many Japanese military officers belonged. Haan claimed to have stolen the book from the hotel room of a Japanese army officer in Los Angeles' Little Tokyo. Matsuo's book was originally titled The Three Power Alliance and the United States-Japanese War (三國同盟と日米戰), which Haan rendered as How Japan Plans to Win.

Haan was also known for causing a stir in May 1943 when he testified before Congress that Japan was planning to end the war in China and launch an invasion of California. This testimony was before the House Immigration Committee, chaired by Rep. Dickstein, as his main purpose for appearing in Congress was to advocate for the repeal of the Chinese Exclusion Law. At the same time, he regularly drew on 'Yellow Peril' fears to buttress his assertions, claiming that tens of thousands of Japanese-Americans were dormant ultranationalists waiting for a signal from Japan to assist in an invasion of the West Coast.

Although the veracity of his claims was often doubted, Haan had powerful supporters in Washington, including Dickstein and Senator Guy Gillette (D-Iowa). From his long service on the Immigration Committee, Dickstein had been focused on the issue of pro-Nazi and pro-Japanese propaganda years before the war. In 1934 he proposed a resolution that established a committee to investigate subversive propaganda by Americans on behalf of hostile foreign powers: what became the Dies Committee and later the House Un-American Activities Committee.

For his part, Haan's public profile diminished after the war; he became a salesman in California and died there in 1976. In 2005, a South Korean film titled Han Gil-su (한길수) was based on Haan's attempts to warn American policymakers before Pearl Harbor.

The Herald American Pictorial Review was a weekly supplement to the Sunday edition of the Chicago Herald-American, a newspaper founded in 1900 and that continued to publish under various names until 1976.

This map was published with an accompanying article in the Herald American Pictorial Review on Sunday, August 22, 1943. It was simultaneously published in several other newspapers with the imprint of the Herald American Pictorial Review, including the Seattle Post-Intelligencer and San Francisco Examiner. This map is not cataloged in OCLC, and we note only a handful of instances when it has appeared on the private market. Note, we also offer the Japanese map upon which it is based (PacificWarDefense-nakata-1935-2).