1863 Johnson Map of Iowa and Nebraska 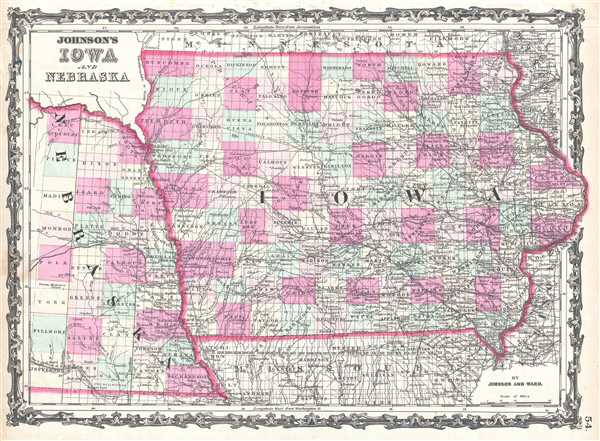 1863 Johnson Map of Iowa and Nebraska

Illustrates the Mississippi and Missouri Railroad in Iowa.
$100.00

This is an 1863 Johnson and Ward map of Iowa and Nebraska. The map depicts the entire state of Iowa and approximately the eastern third of Nebraska, along with portions of Minnesota, Illinois, and Missouri. Highly detailed, myriad cities, towns, and villages are labeled throughout. Counties are labeled, and color coded to allow for easy differentiation. Roads and railroads are illustrated, along with lakes, rivers, and creeks. The whole is surrounded by Johnson's ribbon style border.

This map was published by Johnson and Ward in the 1863 edition of Johnson's Family Atlas.