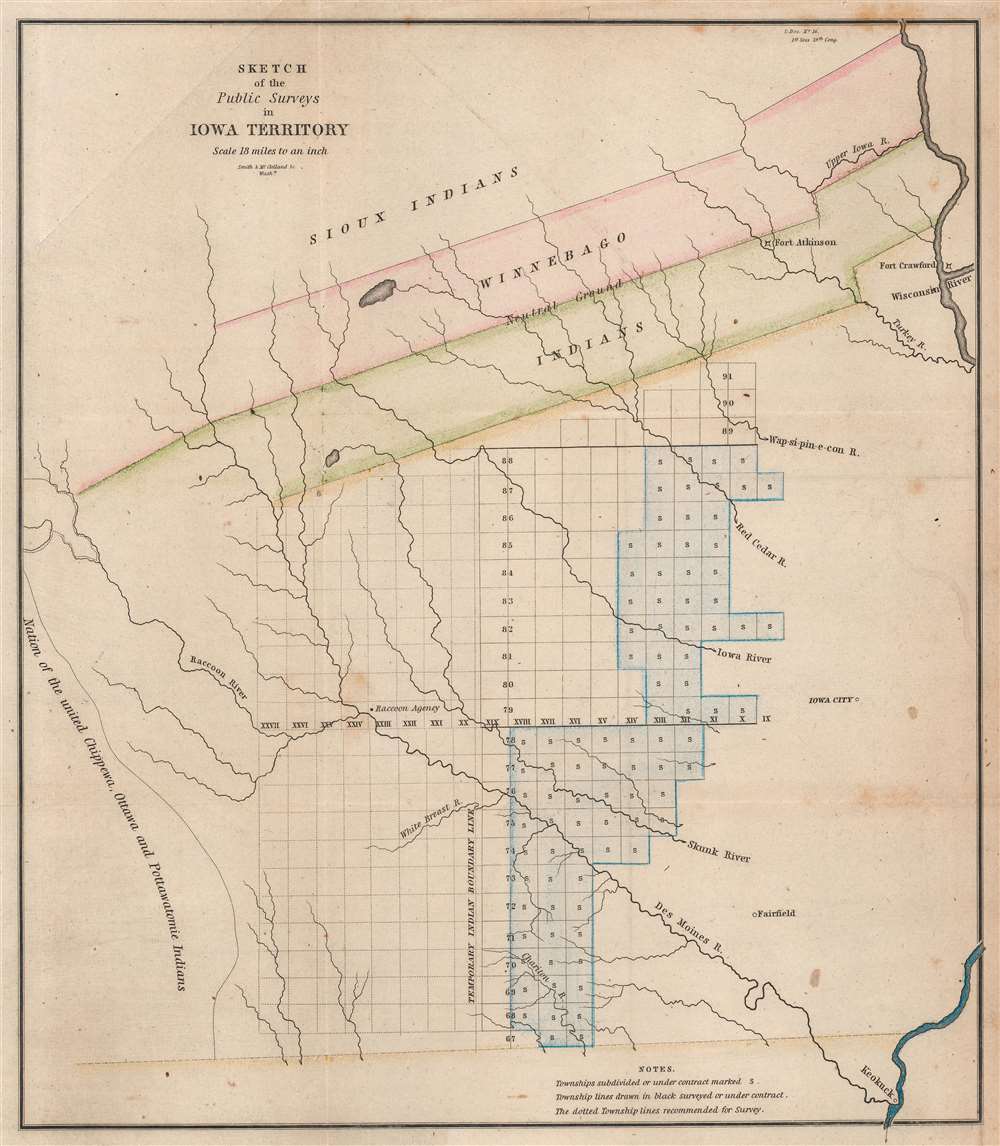 This is an 1845 General Land Office map of the Iowa Territory, covering lands west of the Wisconsin River. The 'Neutral Ground' separating the warring Sioux and Sac and Fox Indian nations dominates the upper map. Fort Atkinson, established to protect the forcibly resettled Winnebago, is labeled within the 'Neutral Ground'. Townships appear below the 'Neutral Ground', and the settlements of Iowa City, Fairfield, and Keokuck are labeled.

Two strips of land stretching from the Mississippi River to the upper Des Moines River (labeled here as Raccoon River) illustrate what was known as the 'Neutral Ground'. In 1830, the U.S. government decided to intervene in a war between the Sioux and the Sac and Fox. The forced peace treaty stipulated that both tribes cede a strip of land twenty miles wide extending from the Mississippi River to the Des Moines River to the U.S. government. This area was intended as a 'buffer zone' to reduce future conflict. The agreement worked well, with both tribes peacefully using the 'Neutral Ground' as hunting ground.

This did not last. Minerals were discovered in modern-day southern Wisconsin in what was then Winnebago land. When miners began encroaching, the Winnebago removed them and defended their lands. Hoping to avoid further conflicted, the Federal government negotiated the cession of the Winnebago lands. The Winnebago were forcibly relocated to the 'Neutral Ground'.

While this idea likely appeared sound to the government officials to organized it, the move failed to take into account the Winnebago themselves. The Winnebago had little desire to move across the Mississippi. Further, reassigning the 'Neutral Ground' placed the Winnebago between two more powerful, antagonistic nations, the Sioux and the Sac and Fox. The Sac and Fox in particular held lingering animosity toward the Winnebago from the Black Hawk War (April 6, 1832 - August 27, 1832). Fort Atkinson was established on the Turkey River to protect the Winnebago, a daunting two-regiment force that kept the tenuous peace from 1843 to 1849, when the Winnebago were again relocated, this time to Minnesota.

Townships are platted below the 'Neutral Ground' west of Iowa City. Some townships are marked with an 'S', indicating that they have been subdivided and sold. Those marked by solid black lines and no 'S' were surveyed or under contract. Townships marked by dotted lines were recommended to be surveyed.

The township was created as the measure of the Public Land Survey System, which was first widely implemented to survey the Northwest Ordinance. The Public Land Survey System allowed for the systematic surveying and mapping of any territory gained by the United States. It played a pivotal role in subsequent settlement and administration new territories and states. The work of the survey influenced American Indian removal efforts, town building, railroad grants, new settlement, and more. Moreover, the efforts of the Federal Land Survey were significant in centralizing power with the Federal Government at the expense of states.