1866 Mitchell Map of Ireland and Scotland 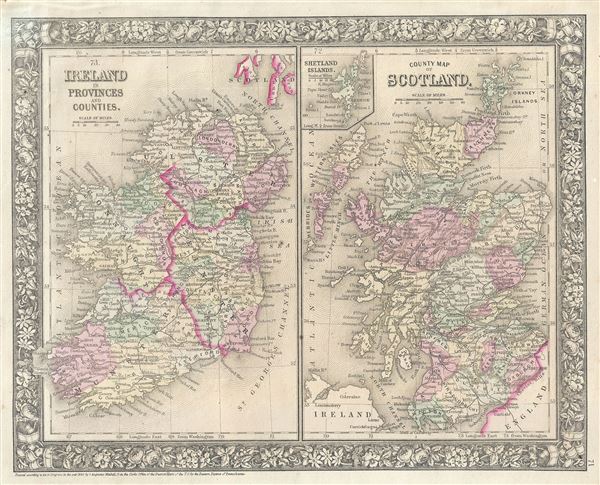 1866 Mitchell Map of Ireland and Scotland

This is a beautiful example of the American map publisher Samuel Augustus Mitchell Jr.'s 1866 map of Scotland and Ireland. Essentially two maps on a single sheet, this map details all of Ireland and Scotland with an inset map of the Shetland Islands. The map on the right covers Scotland in full from the Orkney Islands to Wigton in the south, inclusive of the Hebrides. The left hand side map covers the emerald isle in full from Donegal to Cork, divided into its four primary provinces, Munster, Ulster, Connaught and Leinster as well as its various provinces.

During the 19th century, Ireland suffered a series of famines, the worst one being the Great Irish Famine, which lasted from 1845 – 1849 and killed about a million people. As a result it witnessed widespread immigration. By the end of the 19th century, almost 50% of immigrants into the United States were from Ireland. At the same time Scotland was in the midst of its industrial revolution and emerging as center for engineering and shipbuilding.

This map also identifies various cities, towns, rivers and an assortment of additional topographical details. Map is color coded according to political boundaries with elevation rendered by hachure. The whole is surrounded by the attractive floral border common to Mitchell atlases between 1860 and 1866. One of the most attractive American atlas maps of this region to appear in the mid-19th century.

Prepared by S. A. Mitchell Jr. for inclusion as plate 71 in the 1866 issue of Mitchell's New General Atlas. Like many American map publishers of this period, Mitchell did not regularly update his copyright, consequently this map is dated and copyrighted to 1860: 'Entered according to Act of Congress in the Year 1860 by S. Augustus Mitchell Jr. in the Clerks Office of the District Court of the U.S. for the Eastern District of Pennsylvania.'