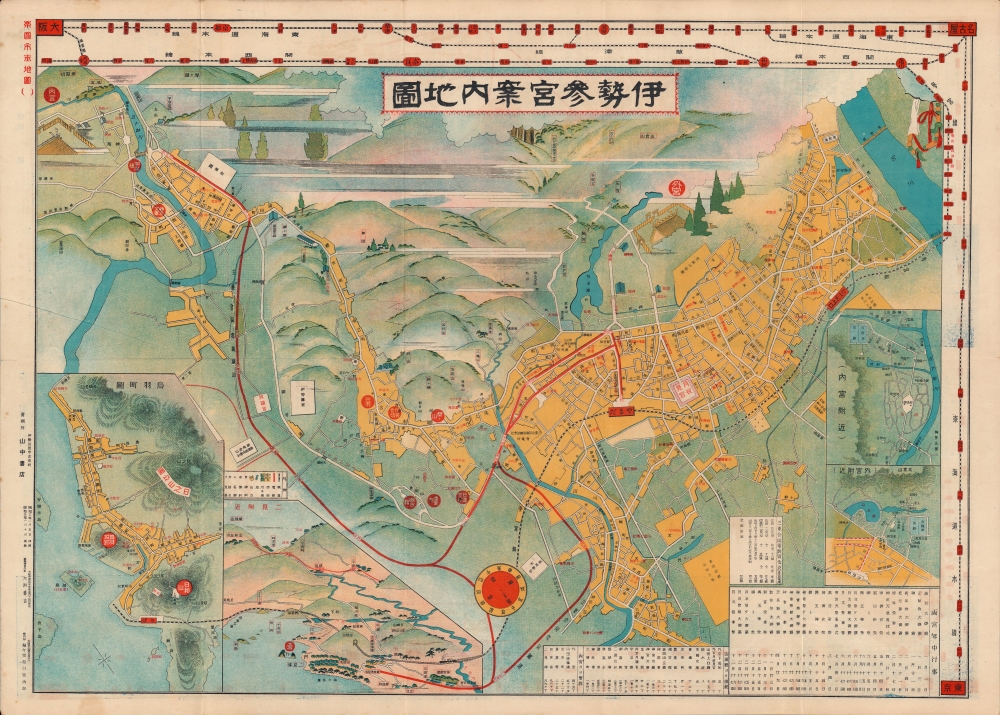 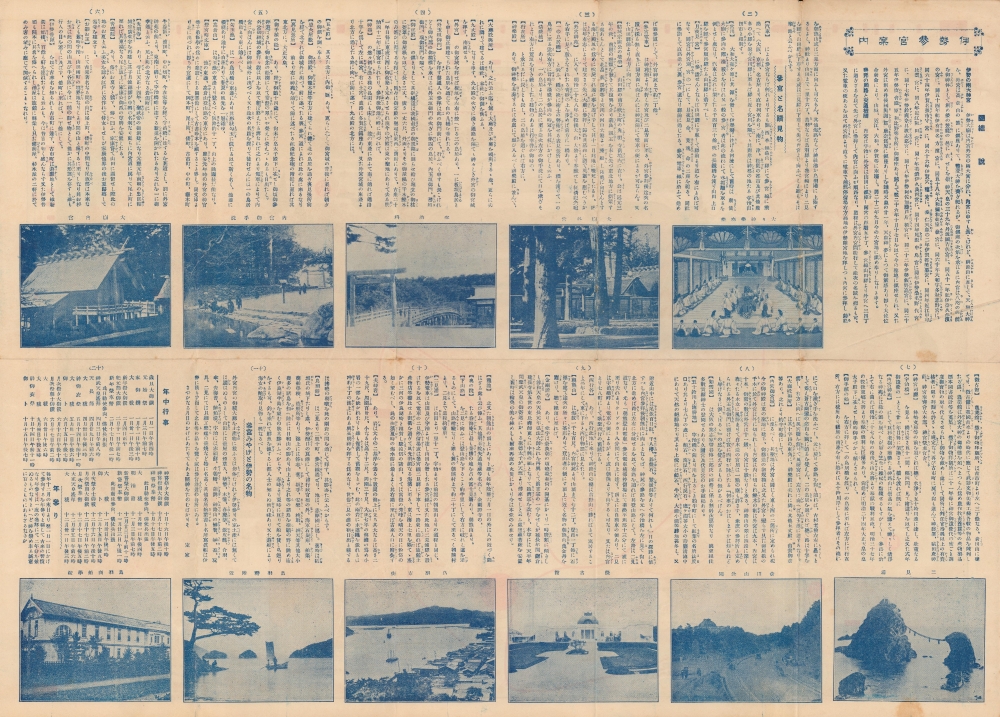 A beautiful 1928 Oobuchi Zenkichi map and view of Ise in Mie Prefecture, Japan, famous for being home to the Ise Grand Shrine, the most important shine in Shintō. It presents the 'holy city' in the early Showa, when it attained especially great prominence given its association with the imperial family, the centerpiece of Japanese nationalism.

This sheet provides an interesting combination of an overhead city map with a bird's-eye view. It is oriented towards the southwest, with a compass at bottom combining cardinal directions with the traditional East Asian system of earthly branches (地支). Along the top and right border is a schematic of train lines leading to Osaka, Kyoto, Nagoya, and Tokyo from Ise.

Inset maps at bottom-left depict nearby Toba (鳥羽) and Futami (二見), while those at bottom-right are of the Inner Shrine (内宮) and the area near the entrance to the shrine, around Yamada Station (山田駅, today as Ujiyamada Station), which on the main map is written out in kana instead of kanji (やまだ). A small legend sits above the inset map of Futami. Tables at bottom-right provide the fares along the regional Mie Electric Railway (三重合同電氣鐵道), an annual calendar of festivals and events at the shrines, and tables of distances from Yamada Station and the Inner Shrine to various points throughout the city.

The city of Ise is home to dozens of (Shinto) shrines and (Buddhist) temples, but the most important are the ancient Inner and Outer Shrines, which despite their names are not part of the same complex (the Inner Shrine, or naikū, sits at top-left here while the Outer Shrine 外宮, or gekū, is at top-right). Adding to the confusion, the term 'Ise Grand Shrine' (伊勢神宮) refers to a collection of structures at both the Inner and Outer Shrines.

These shrines are closely tied to the Japanese Imperial Family and are not open to the public, though the grounds around them are. Although there are large shrines that are the central reference points for the Inner and Outer Shrines, shrines throughout the city and surrounding countryside affiliate with one or the other main shrines. For example, the large Tsukiyominomiya Shrine (月夜見宮), prominent at right-center near the Yamada railway station, is subordinate to the Outer Shrine and follows the same restrictions on public access, even though it is surrounded by the urban portion of Ise Municipality.

The verso includes information on the history of the city and shrines (explaining some of the complexities just mentioned), transportation, and various events and festivals throughout the year.

The Ise Grand Shrine stands in a class all its own, greater in importance than any other Shinto shrine, as it houses the spirit of the sun goddess Amaterasu, a deity synonymous with Japan's royal family and the country itself. Often referred to simply as 'the shrine,' it is traditionally overseen by a member of the royal family acting as a Shinto priest or priestess (currently Kuroda Sayako, sister of Emperor Naruhito, who retains this role despite 'leaving' the Imperial Household upon marrying a commoner in 2005). As a religious site, Ise is old enough that its early history is difficult to separate from mythology, but it is traditionally dated to having been founded in 4 BCE, with the current shrine complex beginning construction under Emperor Tenmu in the late 7th century. Over time, additional shrines (more than 100) were added and a city grew around the religious sites, leading to the modern municipality of Ise.

Reflecting Japanese aesthetics and religious beliefs, including influences from Daoism and Buddhism, the shinmei-zukuri style of the buildings is simple and unadorned. Every twenty years for centuries the shrines have been dismantled and reconstructed with new material to keep them pristine, with the spirits (kami) relocated to the new structures (this process most recently took place in 2013).

This map dates from the early Showa era, which culminated changes that began during the Meiji Restoration of the late 19th century. One of the first major tasks of the Meiji Restoration was the creation of the State Shinto system. This process centralized thousands of local shrines and religious practices, cut off their existing means of finance, put them under a single priesthood structure, and placed the imperial family at the center of worship, turning folk religious practice into a vehicle for building national identity and nationalism. Female priestesses were also divested of their religious authority and replaced by a male clergy. At Ise, the reigning emperor (Meiji, Taisho, Showa) oversaw the shrines and conducted ceremonies. There was often local opposition to these measures, but they were forced through, nonetheless. In the late 19th century, many thousands of shrines closed or consolidated and those that survived increasingly became little more than boosters for Japanese imperialism.

State Shinto especially elevated Ise, as claims of unbroken descent from Amaterasu through to Hirohito (the Showa Emperor) was central to Japan's wartime nationalism, which in some ways was reminiscent of racialist thinking in Europe (the 'Yamato race' descended from Amaterasu being superior to all others). The shrine saw millions of visitors in 1940, when the country celebrated the '2,600th anniversary' of the founding of the Empire of Japan, a claim even more suspect than the unbroken descent from Amaterasu, but which nevertheless had widespread currency in the context of Japan's wartime hypernationalism.

Major reforms during the American occupation severed the ties between Shinto and the state, but the shrines and folk religious practices eliminated in the Meiji era could not easily be revived, and some remnants of the imperial era survive, such as the commemoration of war dead (including war criminals) at Shinto shrines, in particular the Yasukuni Shrine.

This map was edited and published by Oobuchi Zenkichi (大淵善吉) (listed in earlier editions as 大淵傳次郎 Ōbuchi Denjirō) in January 1928 (Showa 3). It was printed by the Travel Information Department of Shinshin-dō (駸々堂旅行案内部, also cataloged as 駸駸堂旅行案内部), a bookstore and publisher based in Osaka and Kyoto, and was sold by the Yamanaka Bookstore (山中書店) in Ise. Earlier editions of the map are held by the National Diet Library (1919 edition), the International Research Center for Japanese Studies (Nichibunken, 1922 edition, OCLC 1020938341), the University of California Berkeley and the National Diet Library (1924 edition, OCLC 908169679), and the Mie Prefectural Museum (1925 edition). However, we are unable to locate any other examples of this edition of the map in institutional collections or on the market.

Oobuchi Zenkichi (大淵善吉; fl. c. 1912 - 1942) was a prolific writer, editor, publisher, bookseller, and cartographer based in Osaka. He was a descendent of Oobuchi Wataru (大淵渉; 1855 ‐ 1907), who founded the Shinshindō (駸々堂) bookstore and publishing house, and particularly focused on tourist maps for various cities and sites throughout Japan. Learn More...

Very good. Some wear along fold lines. Crease at left-center extending from margin into image. Offsetting in margin at bottom and right.