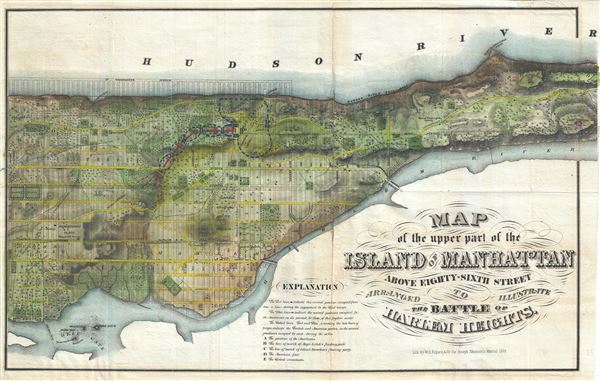 A stunning and rare 1868 Map of the northern part of the island of Manhattan, New York city by W. C. Rogers. The map covers the upper part of Manhattan, above 86th street (including Morningside Heights, Manhattan Valley, Harlem, Inwood, the Upper West Side, the Upper East Side, etc...) in extraordinary detail, depicting streets, buildings, estates and in many cases individual trees. This map is most certainly based upon the 1836 Topographical Map of the City and County of New York drawn by David H. Burr and published by J.H. Colton. Colton's map was perhaps the ‘finest example of artistic mapmaking applied to the Island of Manhattan' (I.N. Phelps Stokes). This map uses only the northern portion of Colton's map, but features the same stunning detail. Beautifully hand colored to illustrate the Battle of Harlem Heights. This is the finest map to specifically detail northern Manhattan that we are aware of.

Very good. Some damage and toning along original fold lines. Some creasing and cracking, especially near top left quadrant. Professionally flattened and backed with archival tissue.