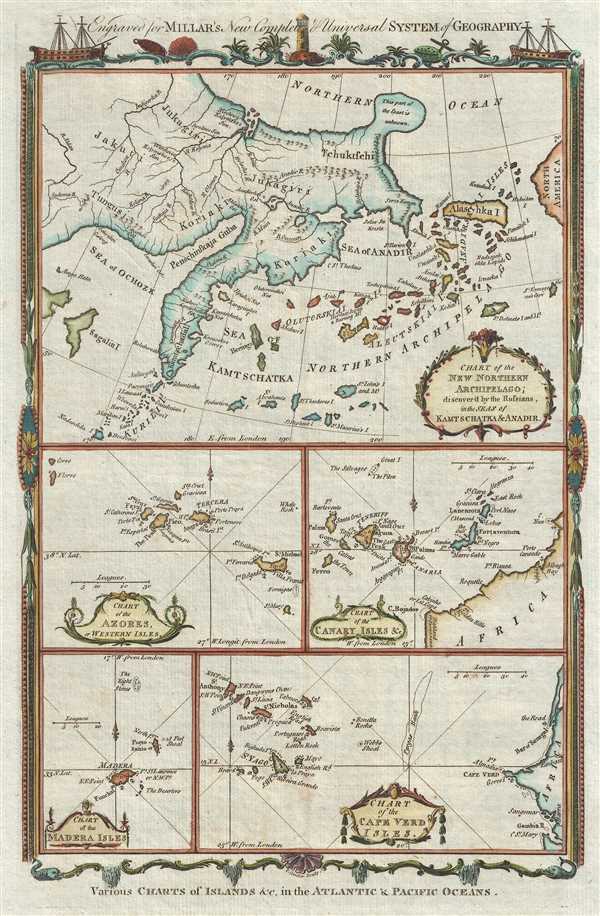 This is a 1783 George Henry Millar map of various islands Groups. The map is truly a series of maps printed together on one page, including an early mapping of the Bering Strait and Aleutian Islands, the Azores Islands, the Canary Islands, the Cape Verde Islands, and the Madeira (Madera) Islands. This first item, the Aleutian Island and bering Strait, occupies nearly half the page and is the map of greatest interest for its depicting of an early and ephemeral speculative geography postdating the Vitus Bering expedition, but predating the subsequent James Cook Expeditions.

Most interesting is the odd bulbous projection extending north from eastern Siberia. This oddity appears on numerous maps dating from the late 17th and early 19th century. It is a legacy of Peter the Great's obsession over the search for a Northeast Passage. Around 1648, the Cossack Semen Ivanovich Dezhnyov (1605 - 1673) put together a rough and ready expedition to explore the region. His company consisted of Fedot Alekseyev, traveling with the merchants Andreev and Afstaf'iev (representing the Guselnikov merchant house), who provided their own ship. Also in the group was Gerasim Ankudinov, an experienced sea captain with his own ship and some 30 men. Dezhnev, along with Mikhail Stadukhin, recruited some 19 men of his own and procured a traditional kocha ship. Including escort vessels, a total of seven ships sailed from the mouth the Kolyma River, along the Siberian Arctic, to the Anadyr River north of Kamchatka, and in doing so became the first Europeans to sail through the Bering Strait some 80 years before Vitus Bering. Dezhnyov described rounding a large mountainous promontory Chukchi, Tschuktschi, or Chukotka Peninsula. Of the seven vessels and multiple leaders, only three ships, and Dezhnyov survived the passage. His expedition was mostly forgotten outside of limited cartographic circles until the German cartographer Gerhardt Friedrich Muller discovered Dezhnyov's reports and in 1758 published them. Dezhnyov ultimately proved that there was indeed a nautical route from Russia to Asia, but at the same time confirmed that it was exceedingly impractical for trade. Nonetheless, his promontory was subsequently embraced by European cartographers who, lacking serious scientific data from the Dezhnyov expedition, surmised the form – often mapping it as an amorphous blob or a narrow peninsula. The first of these was Dutchman Nicholaas Witsen, who prepared a map in 1687 based upon Dezhnyov's records that he discovered on a 1665 trip to Moscow. Many cartographers followed suit, although some even went so far as to suggest that this landmass connected to America, and in doing so, both embraced and dismissed Dezhnyov, whose journey provided the first definitive proof that Asia was not connected to America.

Also of note is the interesting illustration of an insular Alaska and the Aleutian Islands. Here Millar is attempting to reconcile the discoveries of Vitus Bering with earlier cartographic speculations and recently 'rediscovered' Japanese cartography. Millar draws heavily on maps published one year earlier by Jakob von Staehlin. It was Staehlin, working in 1774 from the records of Bering, Gvozdef, and Fedorov, among others archived in the repository of Royal Academy of Sciences at St. Petersburg, who first defined an island named Alaschka. Technically, from the Russian perspective, Alaska (Alaschka), which was derived from the Aleut 'alaxsxaq' meant 'object toward which the action of the sea is directed,' 'great continent' or, quite basically, 'the mainland.' The notion that it might have been an island seems to extend from reports by Russian traders and military officers. Specifically, in 1768, Krenitsyn and Levashev, Russian naval officers, wrote of a large island called 'Alaxa' northeast of Unimak Island referenced by Alaskan natives as the 'Island of Alaschka.' Staehlin applied these reports to reconcile anomalies on the Japanese map acquired by the German naturalist, physician, and orientalist Engelbert Kaempfer. This Japanese map shows an unnamed island in the vicinity of Alaska, which Staehlin expands in size and reorients to correspond to lands discovered by Gvozdef in the wake of the Bering-Chirikov expedition. The other islands, some of which are named, and some of which are not. Are derived from the reports of Captain Ivan Sindt (Sindo). Sindt sailed with Bering and later, in 1768, led his own expedition to the region. As some have suggested he seems to have greatly exaggerated both the size and quantity of the islands he encountered. Staehlin used this to fill in the blanks between the Kaempfer Japanese map and the Bering maps.

This map was engraved for George Henry Millar's New Complete and Universal System of Geography published in 1783. Another version was issued by Alexander Hogg. Millar's work is particularly decorative with whimsical border decorations which, in this case, include ships, light houses, and anchors.