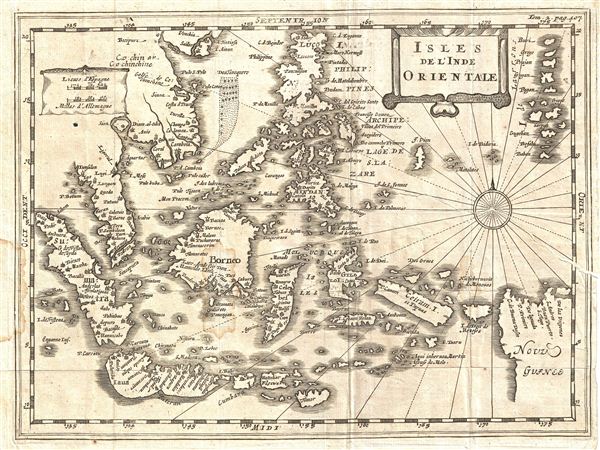 An uncommon c. 1700 map of the east Indies by Phillip Cluver. Centered on Borneo and The Celebes, Cluver's map covers from Sumatra to New Guinea and the Mariana Islands (Larrons), and from Luzon in the Philippines and Halong Bay (Vietnam) to Java and Timor. This map was originally drawn by Cluver in the early 1600s and was reissued many times – often posthumously – well into the early 18th century. The map represents an advanced mapping of the region for the time though many will note indistinct southern boundaries of Java and malformed islands. Sumatra, Borneo, and the Philippines however are roughly correct in form and proportion. The Strait of Singapore (Sincapura) is noted at the southern tip of Malay. This edition of Cluver's map was prepared for Martineau de Plessis' Nouvelle Geographie, published in 1700.


Martineau Du Plessis (fl. c. 1700) was a French geographer and schoolmaster from Fontenay, possibly Fontenay-le-Comte. He is best known for his multivolume geography, Nouvelle Geographie issued in 1700. Little else is known of his life.