1788 Bonne Map of the Hawaiian Islands 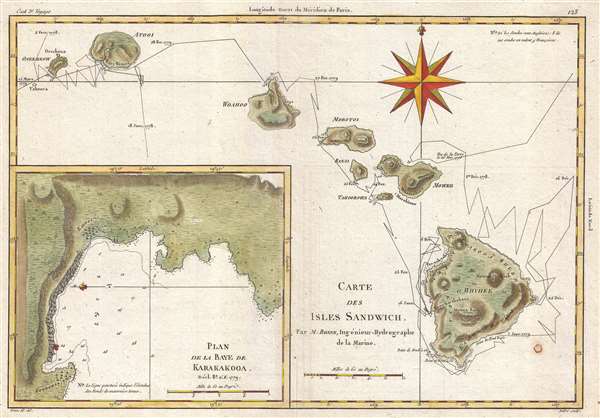 1788 Bonne Map of the Hawaiian Islands

A French Edition of a map originally drawn by the crew of Captain Cook's third voyage.

This is a 1788 Rigobert Bonne map of the Hawaiian Islands and part of the third and final voyage of Captain James Cook. The map depicts Hawaii, Maui, Lanai, Molokai, Oahu, Kauai, and Nihau. The route followed by the ships is illustrated in detail on the map along with dates at certain points. An inset map of the Bay of Karakakooa is situated in the lower left corner.

With the goal of discovering the Northwest Passage, Cook discovered the Islands on his way to the Pacific coast of North America. After reaching the Bering Strait and discovering that he could not continue east or west, Cook and his party returned to Hawaii. It was here, at the Bay of Karakakooa, on the 14th of February 1779, that James Cook met his fate. After a series of quarrels with native Hawaiians, violence broke out and Captain Cook was killed, along with four marines. His second in command, Charles Clerke, to over command, but he succumbed to tuberculosis only a few months later. The voyage never achieved their goal of finding the Northwest Passage and returned to England in October 1780.

This map was drawn by Rigobert Bonne in 1778.