1766 Mrak / Mrack Manuscript Map of Istanbul and the Bosporus, Turkey 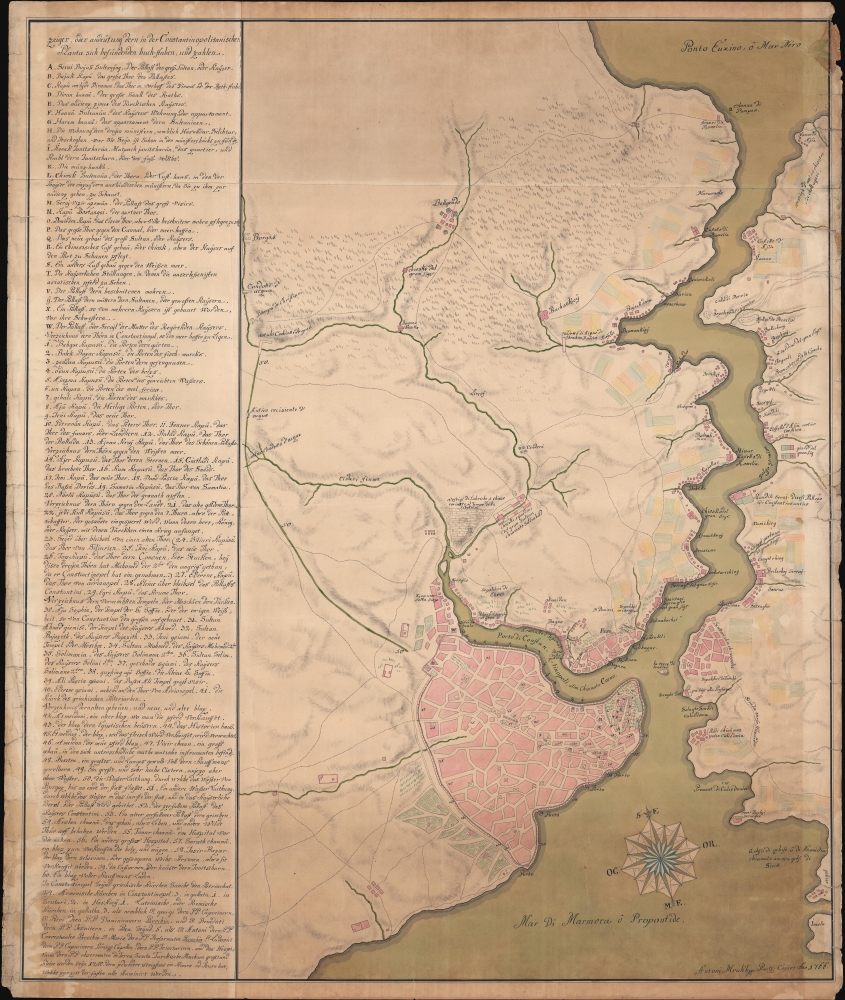 1766 Mrak / Mrack Manuscript Map of Istanbul and the Bosporus, Turkey

Manuscript of the finest map of the Bosporus in the year of the Great Istanbul Earthquake.
$12,000.00

A unique 1766 manuscript map of Istanbul and the Bosporus drawn by the Slovenian surveyor and engineer Anton Mrak (1739 - 1801). This map represents the state-of-the-art mapping of the region in the year of the disastrous Great Istanbul Earthquake. The finely executed hand-drawn map is oriented loosely to the north, and covers the entirety of the Bosporus, the walled city of Istanbul, and the surrounding communities. Istanbul itself is mapped with great care, with coverage detailing the Sultanahmet, Eminoönü, Beyazit, and Fatih districts. Locations along the Bosporus are noted with detail. Curiously, the map is in Italian, but the alphanumeric key appearing along the left is in Slovenian.

The map is closely based on the scarce Homann Heirs map Bosporus Thracicus, itself the finest map of Istanbul then available. It is based upon the in-person surveys of Johann Baptist von Reben, a Royal Hungarian engineer who traveled the area in 1764, taking detailed measurements in and around Istanbul, and along the Bosporus. Homann's map is dated to 1764, reflecting Reben's original surveys, but it may not have been engraved and printed until as much as 2 years later, making it roughly contemporaneous with this map.

Likely, this map was issued in 1766 based on increased interest after the 1766 Istanbul Earthquake, one of the most disastrous urban earthquakes in history. The translation of the content into Italian and Slovenian reflect the influence of the Venetian Republic, which until 1797 controlled much of western Slovenia, including Mrak's hometown of Idrija and the composition of the key in Slovenian may have been a personal choice on the part of the maker to make the map more colloquially useful. The translations are, for the most part, faithful to the 1764 Homann, including the numbering system.

The Streets of Istanbul

The complex winding organically grown streets of Istanbul were historically impenetrable to cartographers who found it near impossible to complete a full survey of the city. Like most preceding cartographers, this map breaks the city into 'building blocks' separated by seemingly wide avenues, rather than proper streets. While the system effectively locates important structures, it does little to illustrate the true complexities of the ancient city. This is a sharp contrast to the mapping of the Bosporus, which is both exacting and useful for travel.

Although not represented tangibly here, the impetus for the creation of this piece was likely interest in the 1766 Great Istanbul Earthquake. The 7.1 Ms (Ms indicates the surface wave magnitude scale) earthquake occurred early in the morning on May 22, 1766. Its epicenter roughly corresponded to the compass rose on this map. It resulted from a fault rupture of the North Anatolian Fault in the Marmara region. It was followed by a series of tsunamis that devastated Istanbul and the Marmara basin in all directions. Deaths are estimated at more than 4,000. Despite its violence, this was neither the first nor most extreme earthquake to hit the city. Constantinople was devastated in 1509 by an even larger earthquaking measuring an estimated 7.4 Ms, and a more recent earthquake at 7.9 Ms hit nearby Izmit. The city's ancient architectures and infrastructure remains at high risk from anticipated future earthquakes of even greater magnitude.

This map was drawn by Anton Mrak, a mining engineer from Idrija (Slovenia). Although based upon the Ruben surveys of 1764, it is likely contemporaneous with the actual publication of Ruben's surveys by Homann Heirs as Bosporus Thracicus. Although the Homann map, having been a separate issue, is itself among Homann's rarest publications, the present related map is, as original manuscript work, unique.

Anton Mrak (1739 - 1801), also known as Antoni Mrakh, was a Slovenian mining engineer, surveyor, and cartographer active in the late 18th century. He was born in Idrija, Slovenia, the son and apprentice of the legendary Jožef Mrak (1709 - 1786), founder and the main representative of the so-called 'Idrija Cartographic School'. Works by Anton are few, but he did make a 1766 map of Istanbul / Constantinople and a 1784 geological map of Idrija's ore deposits. Learn More...

Good. Manuscript pen and ink with fine original color wash. Some edge-wear and margin loss. Both left and right margins have older verso tape reinforcement that has left some whitening and discoloration. Otherwise even toning throughout.