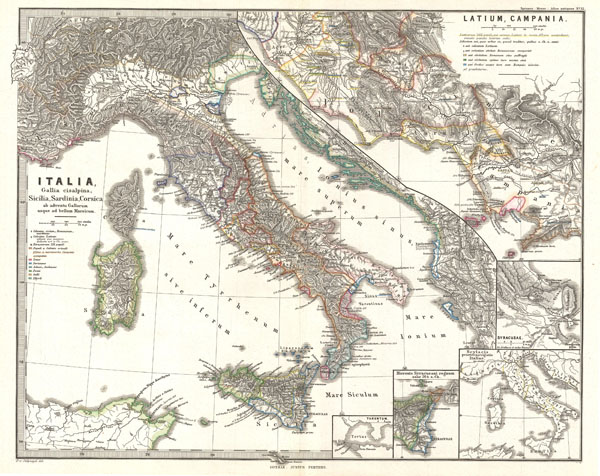 This is Karl von Spruner's 1865 map of Italy, Cisalpine Gaul, Sicily, Sardinia, Corsica, to the arrival of the Gauls after the Marsicus War. This is essentially two larger maps in one, with four smaller insets. In the left quadrant Spruner shows the whole of Italy and Sicily, including a small map key and scale. The right quadrant depicts Latium and Campania. Latium is the region of central western Italy in which the city of Rome was founded and grew to be the capital city of the Roman Empire. This land was originally where the tribe known as the Latins resided. Campania is a region in southern Italy that, during the Roman era, was highly respected as a place of culture by the emperors, where it balanced Greco-Roman culture. The four smaller insets show Tarentum, a detailed depiction of the southern-most area of Sicily, the country of Italy as a whole, and Syracusae. Map shows important cities, rivers, mountain ranges and other minor topographical detail. Countries and territories are designated with colored borders and each map includes a key or legend. The whole is rendered in finely engraved detail exhibiting throughout the fine craftsmanship of the Perthes firm.