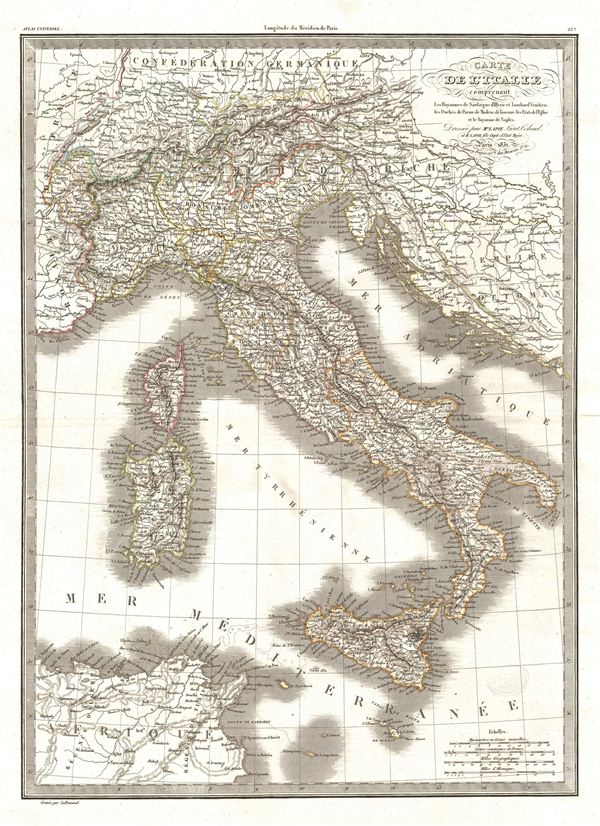 A fine first edition example of M. Lapie's 1831 map of Italy. This map covers all of Italy, inclusive of Sardinia, Corsica, Sicily, Malta, the Dalmatian Coast, and parts of adjacent France, Germany Austria, and north Africa. Lapie's map offers fine detail throughout with elevation rendered by hachure and political boundaries demarcated with outline hand color. This period in the history of Italy saw the birth of the ‘La Giovine Italia' Italian solidarity movement. In 1830 a series of insurrections throughout Italy lead to the adoption of the tricolore and nearly established a united Italian state. Unfortunately, in 1831, just as this map was hitting the presses, Pope Gregory XVI invited an Austrian army to help crush the insurrections, postponing the push for Italian solidarity until the Revolutions of 1848. This map was engraved by Armand Joseph Lallemand as plate no. 23 in the first edition of M. Lapie's important Atlas Universel. This map, like all maps from the Atlas Universel features an embossed stamp from the Lapie firm.