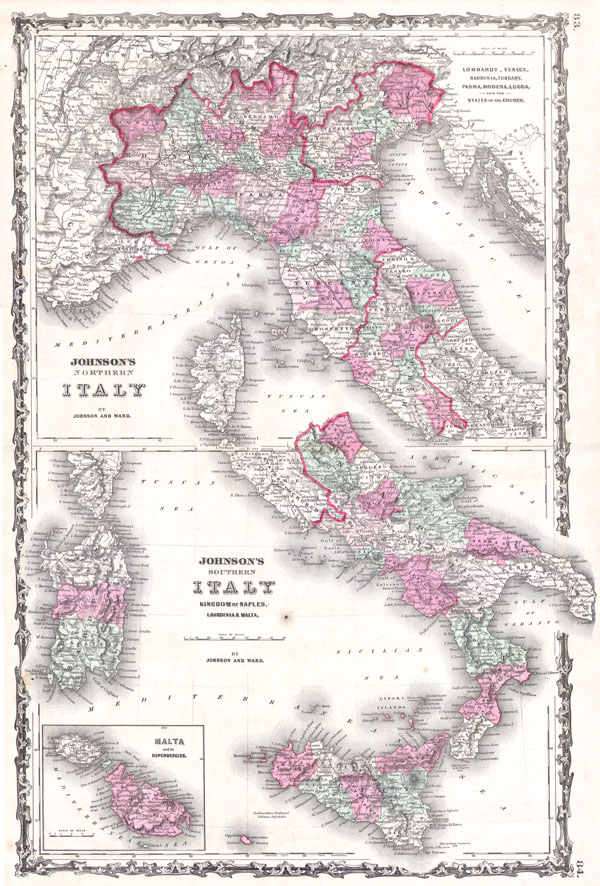 This is a beautifully hand colored 1862 lithograph map of Italy. Divides the region into Northern and Southern parts according to the current (in 1862) geographical and political distinctions. This historically important map depicts Italy during a monumental period when, under Garibaldi and his Red Shirts, the region strove for national solidarity. An inset in the lower left quadrant details Malta and its Dependencies. Surrounded by the strapwork style border common in Johnson's atlas work from 1860 to 1863. Prepared by A. J. Johnson and issued as plate nos. 83-84 in the 1862 Johnson and Ward edition of the Family Atlas. This is the first edition of this atlas to bear the 'Johnson and Ward' imprint.

Johnson, A. J., Johnson's New Illustrated Family Atlas of The World with Physical Geography, and with Descriptions Geographical, Statistical, and Historic including The Latest Federal Census, A Geographical Index, and a Chronological History of the Civil War in America, 1862.

Very good condition. Original centerfold. A couple of minor marginal repairs. Text on verso. Else clean.
Looking for a high-resolution scan of this?