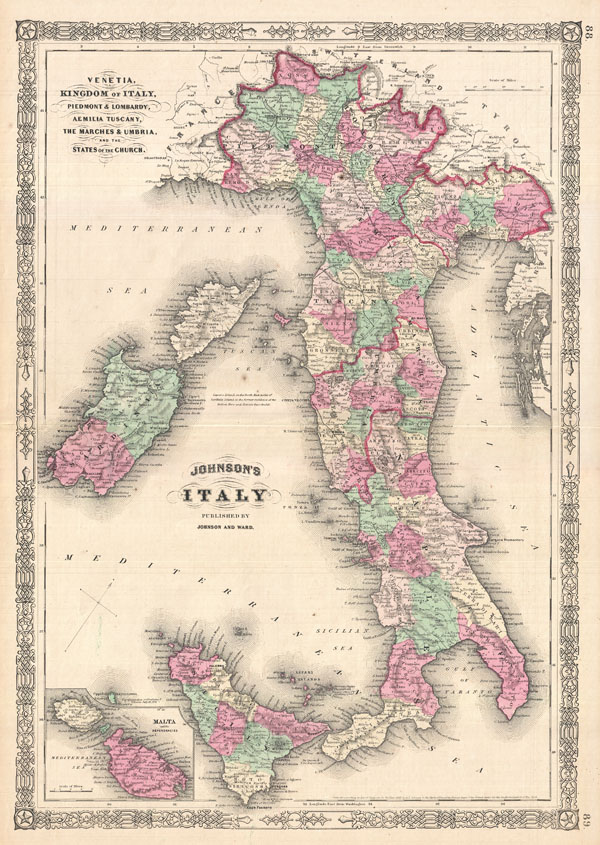 A. J. Johnson's beautifully hand colored 1864 map of Italy. This map shows cities, topographical features, railways, ferries and roads with color coding at the regional level. Johnson introduced this map in 1863, replacing an earlier map of Italy that divided the peninsula into northern Italy, consisting of Tuscany, Venice, and Piedmont, and southern Italy, including the Kingdom of Naples and the Two Sicilys. This bold move was no doubt a response to the Italian solidarity movement which, in the early 1860s under Garibaldi and his ‘Red Shirts,' unified the Italy under a single administrative government.

Published by A. J. Johnson and Ward as plates 88-89 in the 1864 edition of Johnson's New Illustrated Family Atlas. This is the first edition of the Johnson's Atlas to bear the Johnson & Ward imprint and the only edition to identify the firm as the 'Successors to Johnson and Browning (Successors to J. H. Colton and Company).' Dated and copyrighted, 'Entered according to Act of Congress in the Year 1863 by A. J. Johnson in the Clerks Office of the District Court of the United States for the Southern District of New York.'

Very good condition. Original centerfold. Text on verso. Even overall toning. A couple of minor edge repairs and verso reinforcements.
Looking for a high-resolution scan of this?