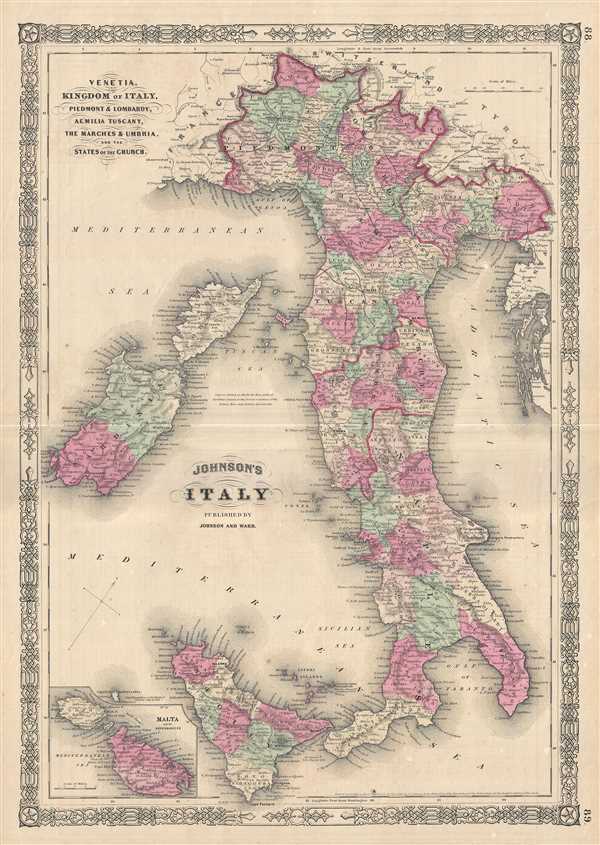 A beautiful example of Johnson and Ward's 1866 map of Italy. Johnson first introduced this map in his 1863 atlas and it represents a substantial re-engraving of his original two-part plate. Throughout, Johnson identifies various cities, towns, rivers and assortment of additional topographical details. In the lower right quadrant there is an inset map of Malta.

Johnson's reconsideration of his Italy map was most likely related to Italy's unification in the 1860s. Shortly before this map was published Garibaldi and his Red Shirts were fighting to unify the disparate city states: Venetia, Kingdom of Italy, Piedmont, Lombardy, Aemilia, Tuscany, the Marches, Umbria, Sicily and the Papal States. No longer a collection of independent states, Italy now needed to be represented as a cohesive whole. In order to accommodate this Johnson reorients his map to the northwest, allowing the boot to fill a single vertical page while leaving space to fully depict Sardinia and Corsica.

The map features the fretwork style border common to Johnson's atlas work from 1863 to 1869. This map was published by A. J. Johnson as plate nos. 88 and 89 in the 1866 edition of his New Illustrated Family Atlas of the World.