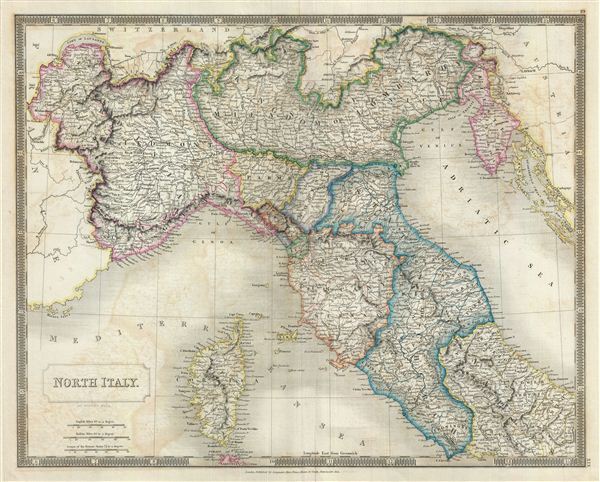 This is a beautiful map of northern Italy from Sidney Hall's extremely scarce 1835 New General Atlas. It covers northern Italy from Savoy to the Kingdom of Naples, including the Island of Corsica. It depicts the territories of Kingdom of Lombardy, Trieste, Tuscany, Modena, Parma, Kingdom of Sardinia, and the State of the Church and part of the Kingdom of Naples. Towns, rivers, mountains, railroads, canals, marshes, forests, and various other important topographical details are noted. Elevation throughout is rendered by hachure and political and territorial boundaries are outlined in color.

As this map was drawn, revolutionary sentiments favoring the unification of Italy were gaining popularity under Giuseppe Garibaldi, paving the way to Italian solidarity. This period thus witnessed the birth of the ‘La Giovine Italia' Italian solidarity movement. In 1830, a series of insurrections throughout Italy lead to the adoption of the Tricolore and nearly established a united Italian state. Unfortunately, in 1831, Pope Gregory XVI invited the Austrian army to help crush the insurrections, postponing the push for Italian solidarity until the Revolutions of 1848.