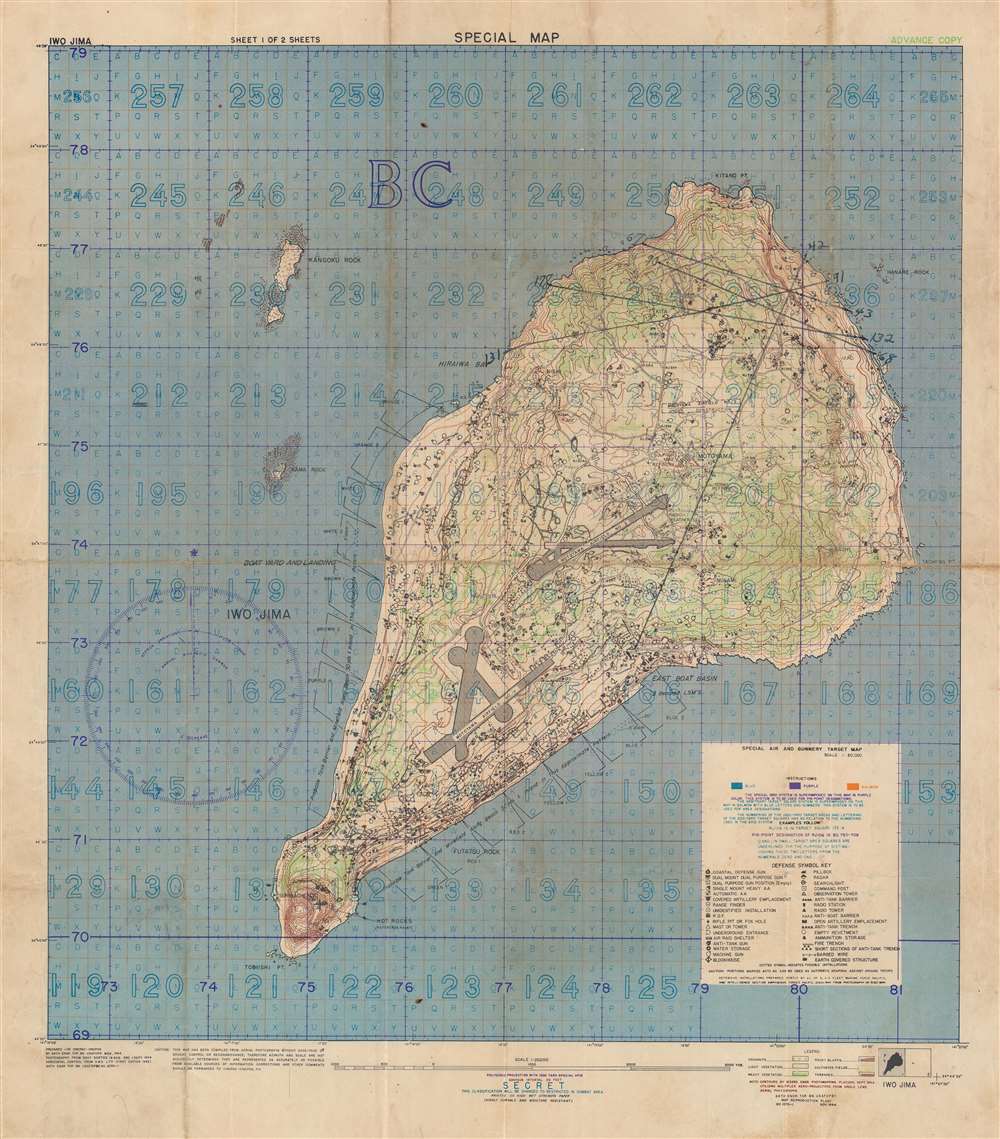 This is a 1944 U.S. Navy map of Iwo Jima prepared for the American Invasion of Iwo Jima - one of the most hard-fought battles in World War II's Pacific Theater. The map is the smaller but broader of two maps issued by the U.S. Navy for the invasion, and in this case, is intended as a gunnery and targeting map. The smaller size, likely made it more practical in the field, while the larger scope, allowed for a wider targeting range.

Iwo Jima's terrain is illustrated with contours emphasizing elevation and color highlighting vegetation. Both airfields are identified, and thirty-four symbols mark Japanese positions, including pillboxes, radar, anti-tank guns, and machine guns. The invasion beaches along the southern coasts are identified by their codenames: Yellow 1 and Yellow 2. A grid for directing airstrikes, artillery fire, and bombardment from naval vessels is superimposed over the map with instructions for how to direct fire provided. Manuscript notations appear in the upper portion of the island, but it is unclear as to exactly what these notations mean.

The Battle of Iwo Jima

The Battle of Iwo Jima (February 19 - March 26, 1945) was an American invasion of the Pacific island of Iwo Jima. One of the Japanese Volcano Islands, Iwo Jima is 750 miles south of Tokyo. It was set up as an important Japanese airbase during WWII. Over the course of the thirty-six-day battle, American forces suffered over 27,000 casualties. Of the approximately 20,000 Japanese soldiers defending the island, only 216 were taken prisoner. Iwo Jima is still remembered for its brutality and its heavy cost. Since the battle, the island's significance as a strategic asset has become disputed. In April 1945, less than a month after the end of the battle, retired Chief of Naval Operations William V. Pratt was quoted in Newsweek

The expenditure of manpower to acquire a small, God-forsaken island, useless to the Army as a staging base and useless to the Navy as a fleet base…[one] wonders if the same sort of airbase could not have been reached by acquiring other strategic localities at lower cost'.

The iconic photograph taken by Joe Rosenthal of six Marines raising the U.S. flag at the top of Mount Suribachi, which subsequently became the U.S. Marine Corps War Memorial, is perhaps the most recognizable memorial of the battle.

Creation of the Map

The installations overlay was prepared by the 'A C of S, G2 Fleet Marine Force, Pacific and Intelligence Section Amphibious Forces Pacific 12 Nov 1944'. Translated from military speak that means it was created by the Assistant Chief of Staff, Intelligence (the G2 Section is the Intelligence Section of U.S. Army and Marine Corps staff) of the Marines (which was referred to administratively as the 'Fleet Marine Forces') likely on the staff of the Commander of the Amphibious Forces Pacific. The map was compiled from photographs acquired during Navy sorties from August 19 through September 1, 1944. The contours were executed by the 1633rd Engineer Photomapping Platoon in September 1944 via aerial photographs and was prepared for CINCPAC - CINCPOA (Commander in Chief Pacific - Commander in Chief Pacific Operations Areas) by the 64th Engineer Topographic Battalion in November 1944.

This map was created for CINCPAC - CINCPOA in November 1944 by the 64th Engineer Topographic Battalion. This is the only known example of this edition of the 'Special Air and Gunnery Target Map' of Iwo Jima. A larger, similar map was published around the same time, but the present edition covers more area allowing for potentially targeting incoming enemy vessels to the west of Iwo Jima.