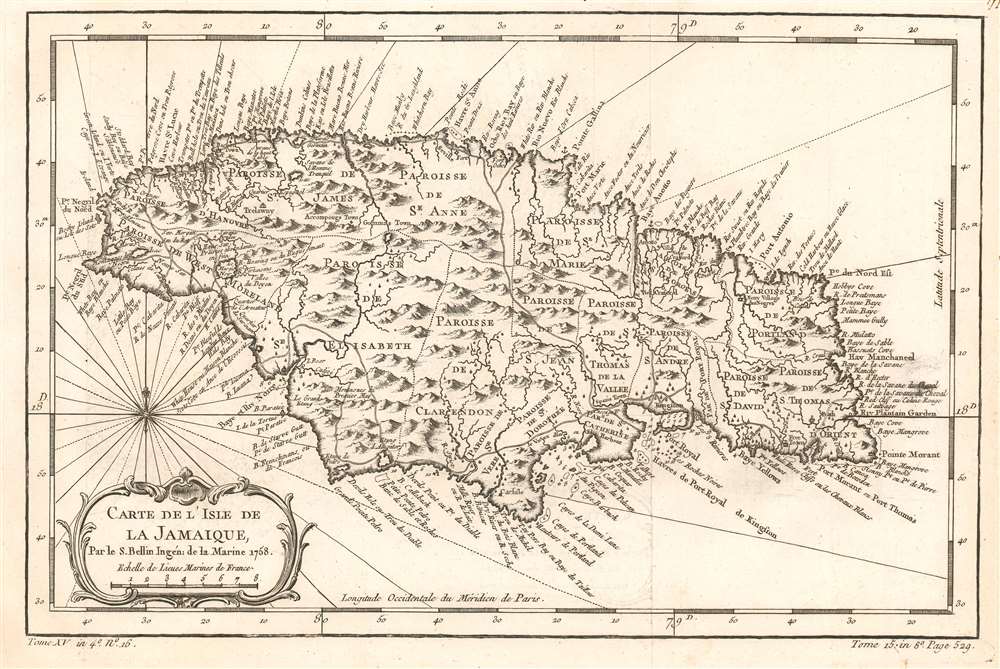 This is a 1758 Jacques Nicolas Bellin map of Jamaica. Incredibly detailed and beautifully engraved, each of the island's parishes is labeled. Roads are illustrated and the towns and villages are labeled, including Kingston. Myriad coastal locations are also identified, along with descriptions of the island, including a burned savannah, the 'Savannah of the Tranquil Man' ('Savane de l'Homme Tranquil'), and the Black Swamp ('Le Marai Noir').

The First Maroon War and This Map

The First Maroon War was fought between Jamaican Maroons (the descendants of escaped African slaves during Spanish rule of Jamaica) and colonial British authorities from 1728 until 1739 - 1740. The Maroons had established independent communities in the mountainous interior of the island and the Windward Maroons resented British attempts to conquer the island. Using guerrilla tactics, the Maroons inflicted heavy losses on the British garrison on Jamaica, and it was not until 1739 and 1740 when treaties were signed between the warring parties that respected Maroon autonomy. Maroon communities, including Trelawny and Accompougs Town, are labeled here, as is a 'new village of Blacks' ('Nouv. Village des Negres')