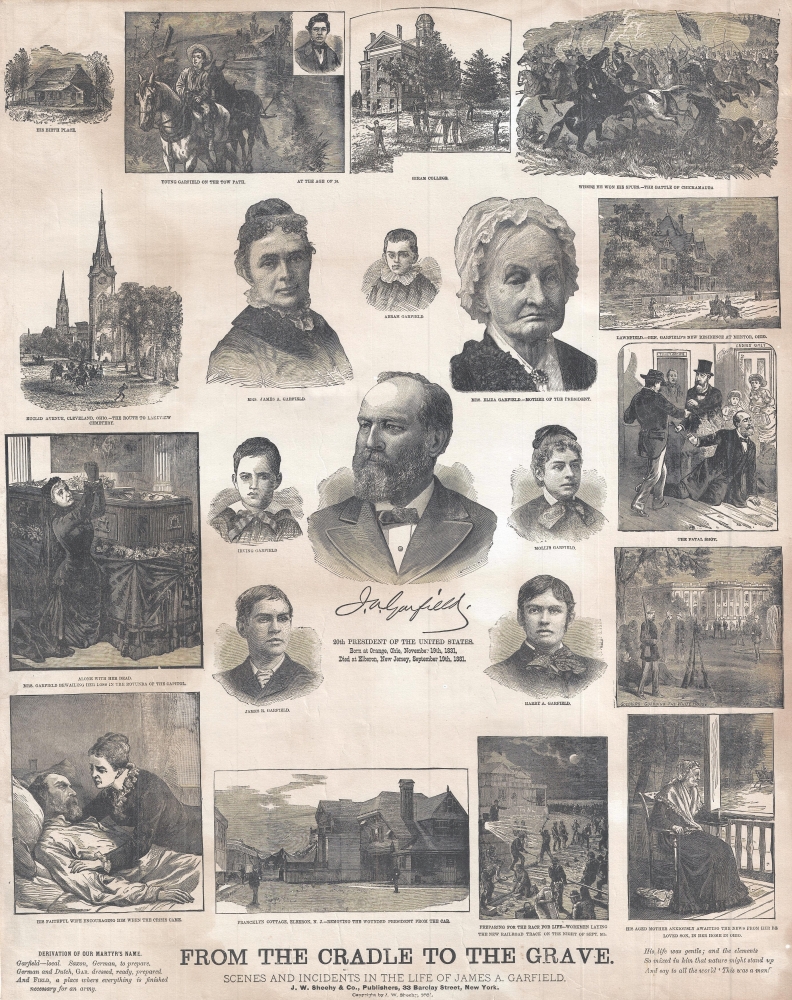 A political broadside commemorating the life and death of President James A. Garfield.
$700.00

This is an 1881 J. W. Sheehy and Company broadside commemorating the life and death of President James A. Garfield. The broadside features 22 engraved vignettes of scenes from President Garfield's life and portraits of his family. The vignettes trace his life from birth in a rural home in Orange, New Jersey to his death by an assassin's bullet. Presented as an overview of President Garfield's life, this broadside dismisses most of Garfield's accomplishments in favor of focusing on his humble childhood and the tragedy of his assassination.

A Description of the Vignettes

In the first four views, Garfield's humble beginnings are illustrated, if not lauded, through as scene of him as a youth working a tow path along a canal and his time at Hiram College. The following vignette is a scene from the harrowing American Civil War battle the Battle of Chickamauga. Garfield distinguished himself as a daring and able commander during the battle by undertaking a now legendary ride along Missionary Ridge to survey the battlefield. From Chickamauga, which took place in September 1863, the vignettes skip to Garfield's home in Mentor, Ohio, which reporters later named Lawnfield, although the reason for its inclusion is not explicitly stated. Garfield purchased this home in 1878, a gap of fifteen years. Lawnfield would become famous because Garfield was the first to run a 'front porch campaign' for the presidency.

After Lawnfield, the next vignette illustrates President Garfield's assassination by Charles J. Guiteau, a disgruntled office seeker. Garfield was shot at the Baltimore and Potomac Railroad Station in Washington, D.C. on July 2, 1881. The last seven vignettes deal with Garfield's treatment, death, and burial. His treatment lasted eleven weeks before he finally succumbed on September 18, 1881. One of the measures taken during his treatment was to get him out of Washington to convalesce in Elberon, New Jersey. A special spur line was constructed by volunteers over the course of one night to the Franklyn Cottage, where the President lived until his death. The last two vignettes illustrate Garfield's wife, Lucretia, mourning her husband in the Capitol Rotunda and the route to the Lakeview Cemetery in Cleveland, Ohio, where President Garfield was ultimately laid to rest. The center of the broadside features eight portraits of the Garfield family, with President Garfield in the center. He is ringed by portraits of his wife, five children, and his mother.

Perhaps the most intriguing part of this broadside is not what it illustrates but what it leaves out. All of President Garfield's professional accomplishments are glossed over, in favor of focusing on his 'everyman' childhood and his assassination. History has done mostly the same, with some historians even going so far as to leave him off of lists of U.S. Presidents because of the short length of his presidency. Between the Battle of Chickamauga in 1863 and the purchase of Lawnfield in 1878, Garfield served as a distinguished member of the House of Representatives. He created a reputation as an orator, giving many well-received speeches on the House floor. He served on the House Ways and Means Committee and as chair of the House Appropriations Committee and was also entangled in several financial scandals over the course of his tenure in the House, although he never was definitively found to be involved in any of them. Following the election of 1876, Garfield became the Minority Leader and a confidant of President Rutherford B. Hayes. At the nominating convention in 1880, after 35 ballots of deadlock between two candidates, Garfield's name was put forward, much to his consternation. Eventually, Garfield garnered the necessary votes to win the Republican nomination.

This broadside was produced by J. W. Sheehy and Company of New York City. There are at least two different editions of this broadside, both of which are rareties on the open market.

J. W. Sheehy and Company (fl. c. 1881) was a publishing company based in New York City. Little is known about this company, other than that they published views and other lithographs, including the famous broadside ‘From the Cradle to the Grave’ illustrating the life of President James. A. Garfield after his assassination mere months after taking office.