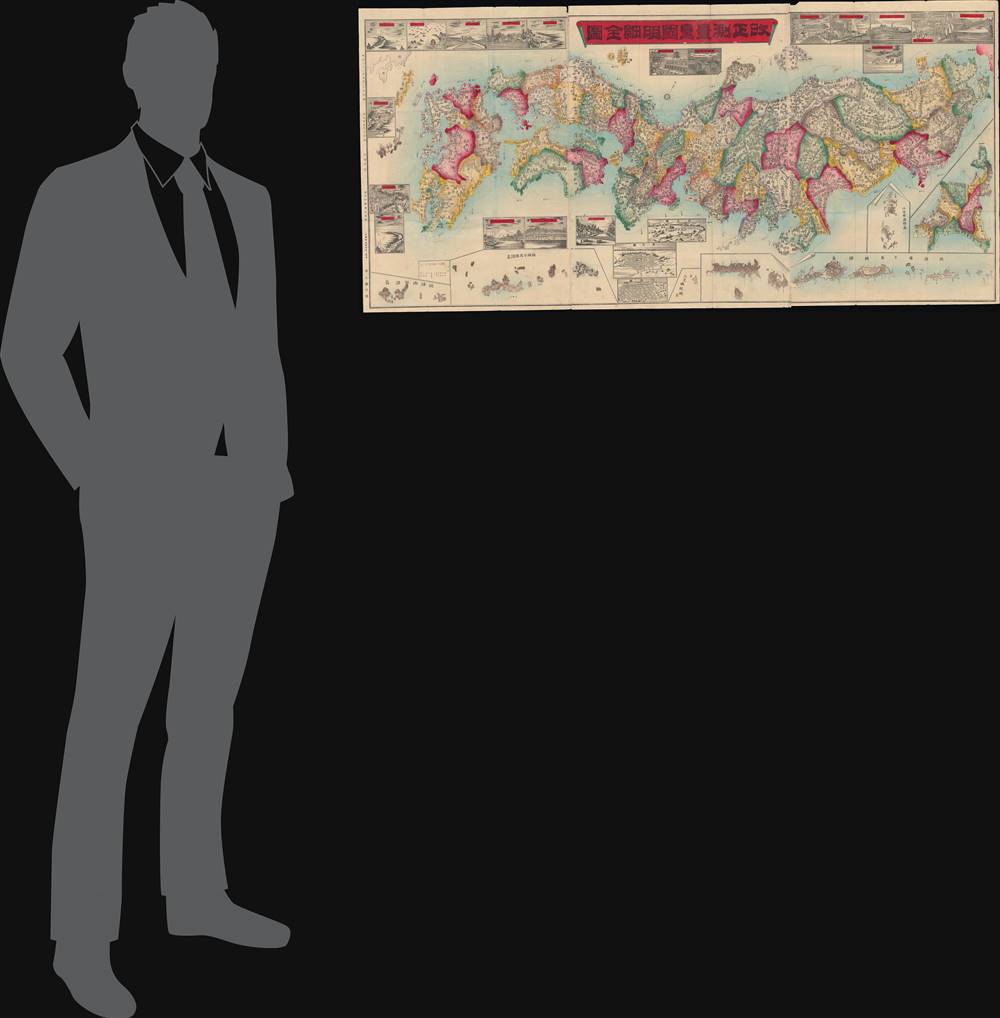 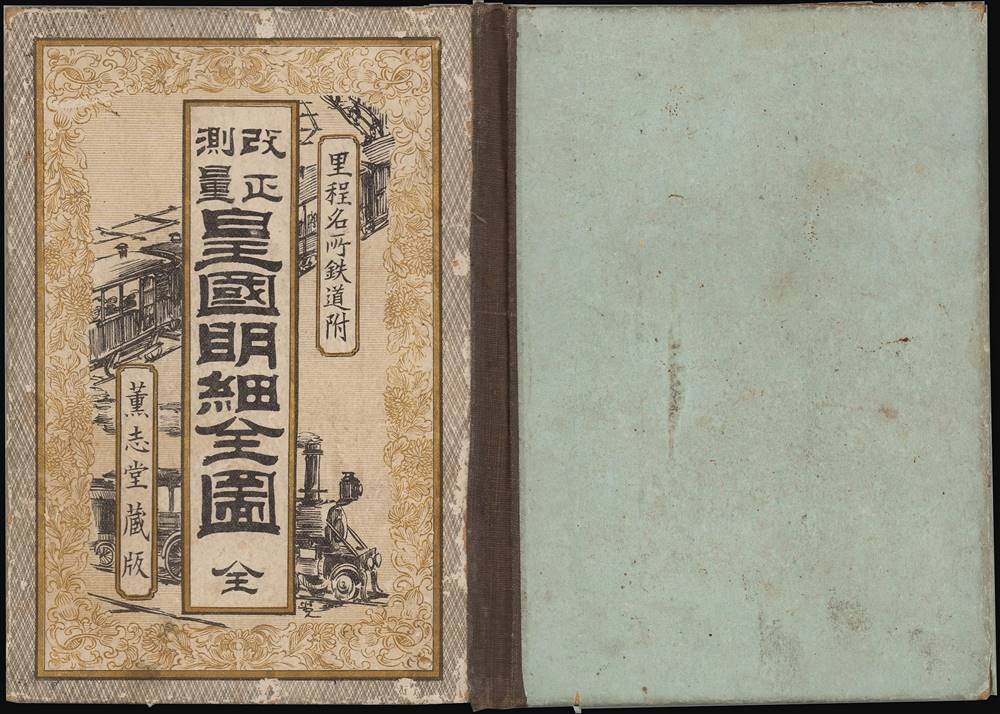 Japan in the midst of social, economic, and geographic transformation.

This is a striking 1888 Inoue Katsugorō folding map of the prefectures of Japan with vignette illustrations. It was most likely made to publicize administrative reforms that began that year, which reorganized territories and instituted a new model of local government.

This map is roughly oriented towards the northwest to display Japan horizontally, as was typical with maps in the Edo and early Meiji. It was most likely made to publicize administrative reforms that began in 1888, transforming local governance and reorganizing, or at least renaming, many existing administrations. Nevertheless, obsolete placenames continued to be used, such as Aki (安藝) for Hiroshima Prefecture here, and many would continue to be used informally or semi-officially for years afterwards.

Below the main map of the Japanese islands of Honshu, Kyushu, and Shikoku, are six inset maps, which (from left to right) represent the southern Ryukyu Islands, the central and northern Ryukyu Islands (including Okinawa), Hachijō-jima and Aogashima in the Izu Islands, the Kuril Islands (Chishima), the Ogasawara or Bonin Islands, and Hokkaido. The legend (towards bottom-left) presents administrative, geographic, and transportation information as well as famous and culturally significant sites. The distances between cities and famous sites by road and railways are also indicated.

The illustrations surrounding the map are of two types: one being birds-eye views of Kyoto (here as the 'western capital' 西京), Tokyo, and Osaka at bottom-center, and the other being views of famous sites throughout Japan, such as the Ise Grand Shrine (伊勢太神宮) at top-center towards top-left, Ueno Station (上野ステーション) at bottom-center towards bottom-left, and the Kiyomizu Temple (清水寺) in Kyoto at top-right. A cover includes illustrations of trains, highlighting the ongoing modernization of Japan.

Following the Meiji Restoration in 1868, Japan went through a series of administrative reforms meant to replace the feudal han system of the preceding Tokugawa period with a modern, bureaucratic state. One the one hand, the government aimed to centralize power in Tokyo to prevent opposition from recalcitrant samurai and others unhappy about the rapid, dramatic 'revolution from above' that was enacted in the years following 1868. On the other hand, over-centralization posed its own problems and prevented efficient handling of local issues. Moreover, localizing administration would bring citizens (or at least educated and landholding male ones) into the political process, improving their collective and national spirit. Thus, the Meiji government turned to the Prussian state as a model, as was the case with the Meiji Constitution proclaimed the following year.

This map was printed on September 20, 1888 (Meiji 21) and published the following day. It was made by Inoue Katsugorō (井上勝五郎) who is also listed as its printer and publisher. A virtually identical map with the same title and slightly different coloration (Rumsey Cb107, OCLC 21811802) was published the same year by Kodama Matashichi (児玉又七), another prominent Tokyo publisher, suggesting either that one publisher bought the master woodblocks from the other or that the publishers were working in tandem. Curiously, the cover does not mention Inoue but indicates that this edition was by Kunshidō (薰志堂), yet a third major publisher in Tokyo. It appears likely that the government, aiming to quickly publicize the newly updated survey map of Japan, contracted with multiple publishers simultaneously, leading to confusing attribution of prints.

Good. Some wear along edges and lines where constituent prints were attached. Periodic wormholes.