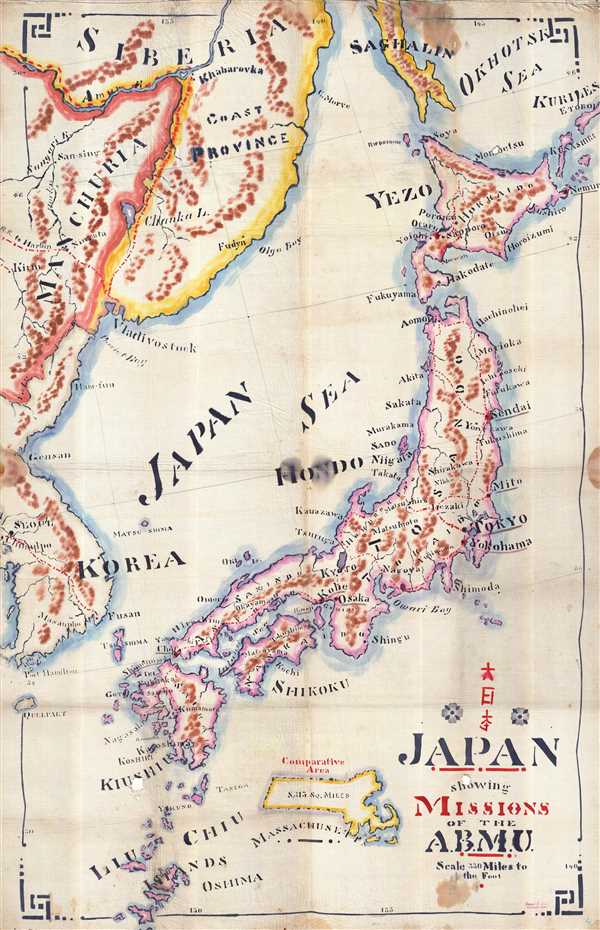 One of a kind A.B.M.U. Missionary Map of Japan.

A remarkable find, this is a one of a kind large scale 1904 missionary cotton field map of the Japan drawn by Samuel E. Mann. Centered on the Japan Sea, the map covers from modern day Japan in full as well as adjacent parts of Korea, Manchuria, and Siberia. Topography is rendered with brown shading. Towns and villages with established missions are underlined in red. The whole is clearly hand drawn using a combination of stencils, India ink, and dyes.

The map bears the name J. P. Goodwin, this may refer to John P. Goodwin, a Long Island born member of the A.B.M.U. Although his name is not clearly associated with the Japan Mission, it appears he must have owned this map as early as 1904, when the mission was active.

Samuel Eleazer Mann (April 10, 1853 - September 14, 1930) was a Methuen, Massachusetts, based cartographer who produced large format missionary field maps on cloth for the American Baptist Missionary Union (A.B.M.U). Most of Mann's maps appear to have been one-offs designed on cloth using Diamond Dyes, India ink, and stencils. The maps were made to order as field documents for various Baptist missionary societies, most particularly the A.B.M.U. The archives of Mount Holyoke College identify one such map, some 13 feet wide, acquired by the Student Volunteer Band. Learn More...

Good. Some staining. Combination of stencil and manuscript work on cotton