1933 Map of the Empire of Japan, including Korea, Taiwan, and the Ryukyus 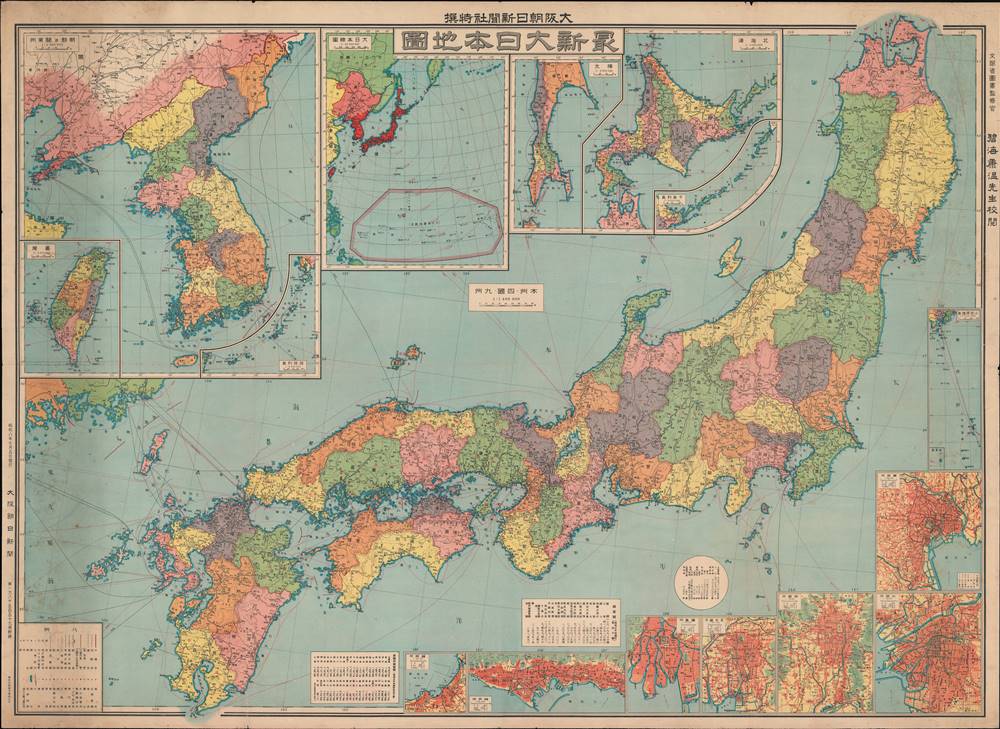 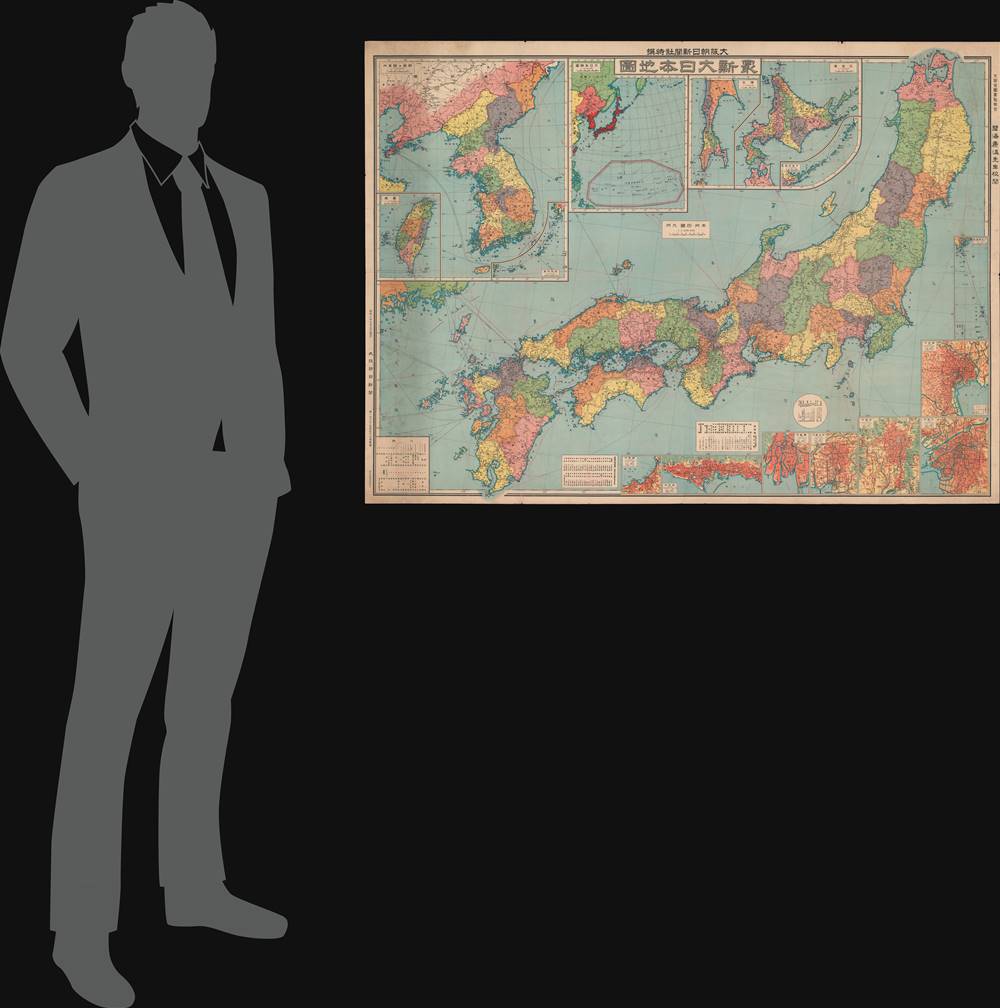 1933 Map of the Empire of Japan, including Korea, Taiwan, and the Ryukyus

This is a large 1933 map of Japan (including Korea, Taiwan, Hokkaido, the Ryukyus, and other colonial possessions) published as an addendum to the Osaka Asahi Shimbun (大阪朝日新聞). It provides a great deal of geographic and economic information about the different parts of the Japanese Empire on the eve of World War II, just as the Japanese military was embarking on new conquests that would eventually lead to the destruction of the empire.

The main map consists of Honshu, Kyushu, and Shikoku Islands, the historical heartland of Japan. Prefectures are shaded different colors to distinguish them, and the names of the prefectures are written in black. A series of insets surrounds this main map, which are, clockwise from top-left: Korea (and the Kwantung Leased Territory), Taiwan, and the Ryukyu Islands; a comprehensive map of Japan (including the South Seas Mandate); the southern half of Sakhalin (Karafuto, ceded to Japan following the Russo-Japanese War, returned to the Soviet Union after World War II), Hokkaido, and the Kurils (Chishima Rettō, also ceded to the Soviet Union after World War II); the Ogasawara Islands; Tokyo; Osaka; Kyoto; Nagoya; Hiroshima; Kobe; and Fukuoka.

The legend at bottom-left includes standard symbols for administrative divisions, geographic features, military facilities, communications, and transportation, but also symbols for cultural sites: shrines, temples, schools, ancient battlefields, and national parks (Japan was in the process of establishing a national park system at this time). Aside from the inset maps, three tables show, respectively, the wealth produced by different prefectures and cities, the contribution of different industries to national wealth, and, inside the white circle, some basic statistics about Japan (land area, population, imports and exports, kilometers of railways, etc.). The recently-established puppet state of Manchukuo is not included on this map because it was never formally a part of Japan's Empire the way that Korea and Taiwan were, but was instead a nominally independent country.

The Turn towards Militarism

The origins of Japanese militarism and ultra-nationalism can be traced at least to the Meiji Restoration and lie primarily with the threat posed by secret societies and the military, especially the Kwantung Army. As was the case internationally, liberalism was discredited in the interwar period, though in Japan anti-liberalism took the form of militarists seeking an imperial 'restoration' beyond that already achieved in 1868; in other words, the dissolution of civilian government and the constitution, in favor of an autocratic system where the emperor dictated all major decisions.

Several leading political and financial figures were assassinated by far-right extremists in the 1920s and 1930s, most notably Takashi Hara, who was killed in 1921 at Tokyo Station, and Inukai Tsuyoshi, who was killed in a failed coup attempt by ultra-nationalistic junior army officers in May 1932. Several other attempted coups failed, most dramatically the February 26 (1936) Incident, which saw open warfare in the streets of Tokyo between pro-government and pro-revolution factions of the military. In the end, while these plots did not succeed, the military came to have greater control over politics (to the extent that the civilian government effectively dissolved itself in 1940) while the threat of a coup and the popularity of radical right-wing ideology moved the country's policies closer to those desired by the ultra-nationalists.

This map was published several months after the establishment of Manchukuo, a Japanese puppet state that was created following the invasion of Manchuria in September 1931 (the Mukden Incident). The brazen act was undertaken by radicalized military officers of the Kwantung Army without the civilian government's knowledge, but was not reversed by Tokyo. It was condemned by the international community, leading Japan to leave the League of Nations, though the country was not long isolated as it soon found common cause with rising fascist and militarist governments, especially Nazi Germany.

This map was published on July 5, 1933, as an addendum to the Osaka Asahi Shimbun (大阪朝日新聞). It was printed by the Seiban Printing Co. (精版印刷株式會社) and reviewed by Aomi Yasuharu (碧海康温), noted as a Book Supervisor for the Ministry of Education (文部省圖書監修官). It is held by the Nichibunken (International Research Center for Japanese Studies), the National Museum of Japanese History, and Brigham Young University, and it is scarce to the market.


Aomi Yasuharu (碧海康温; 1884 - 1943) was a geographer who taught at the Tokyo Normal Women's School (東京女子高等師範學院), now Ochanomizu University (お茶の水大学). He was tasked by the Ministry of Education for reviewing a handful of maps for the Osaka Asahi Shimbun (大阪朝日新聞社) in the 1930s. Learn More...