1881 Suzuki Dōō Map of Japan, including Hokkaido and the Kuril Islands 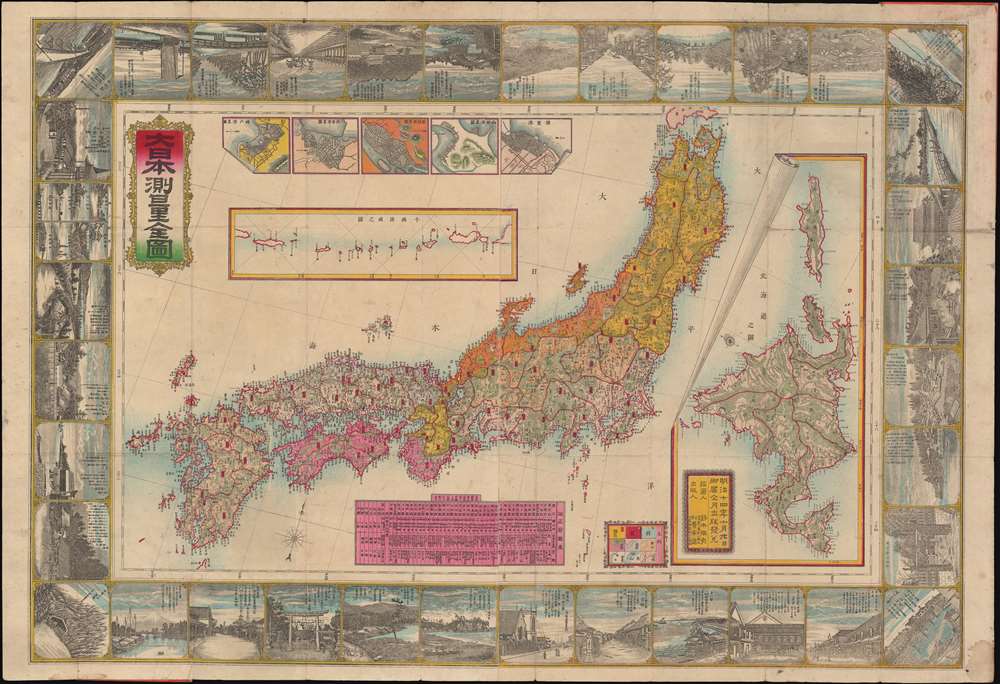 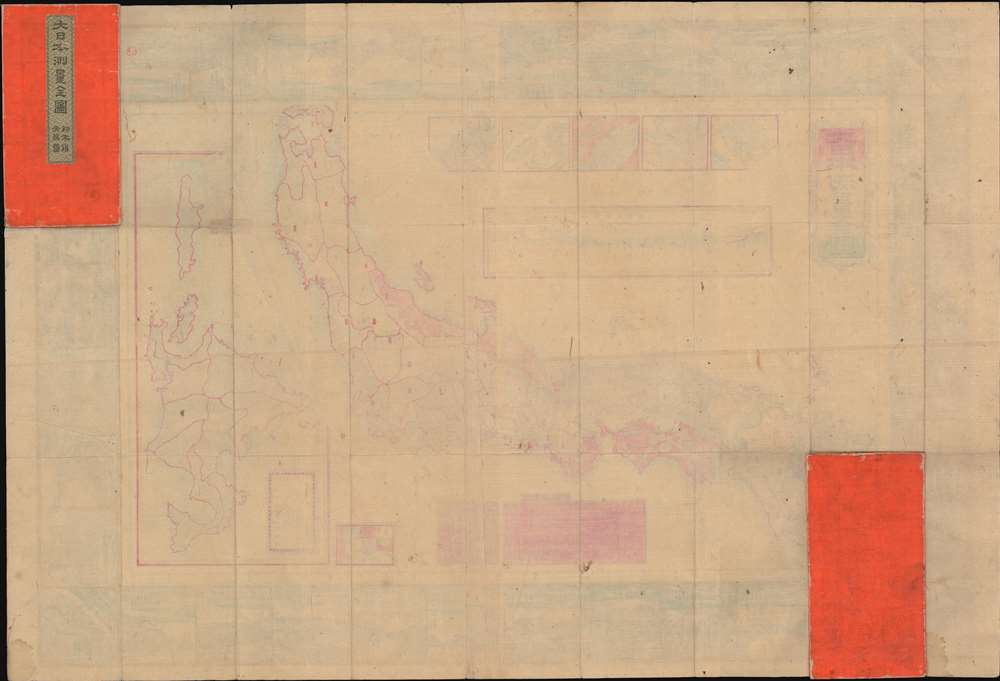 1881 Suzuki Dōō Map of Japan, including Hokkaido and the Kuril Islands

Representing the pinnacle of early Meiji cartography, this is a beautiful 1881 (Meiji 14) Suzuki Dōō folding pocket map of Japan, including Hokkaido and the Kuril Islands, bordered by illustrations of famous and scenic sites throughout Japan. It was both a tool and a product of political centralization by the Meiji authorities based in Tokyo.

A Modern Map for a Modern Nation

The purple table at bottom shows recent changes in administrative regions, including the name of the new administrations, their location, their distance from Tokyo in ri (about 2.44 miles), and which places fell under their jurisdiction (管轄). The legend indicates several geographic and administrative features indicated on the map. A large inset at right illustrates Hokkaido and the inset at top-left depicts the Kuril Islands (it is worth noting that the Ryukyus and other outlying territories are not included). The string of small inset maps at top-left detail (from right to left) Yokohama, Hakodate, Niigata, Nagasaki, and Kobe. The margins mark latitude and longitude, using Greenwich rather than Tokyo as the Prime Meridian. The map is bordered by illustrations of sites from the reformed administrative regions, including Nihonbashi in central Tokyo (at bottom-right), Oura (大浦 in Nagasaki County) at top-center, and Kusatsu (草津) at left-center, famous for its hot springs.

This map was published to reflect the centralized renaming and reorganization of prefectures and counties, listed in the table at bottom, one of several such reforms of the Meiji. This was meant to improve administrative efficiency and further weaken the han feudal system abolished between 1868 and 1871. Although mostly symbolic, the name changes signaled further and irreversible steps away from the Tokugawa model of governance.

This map was intended not only to inform the public about one of the many political and administrative changes of the Meiji, but also to inspire national solidarity. Although the Tokugawa had unified Japan politically and culturally, the Meiji government took these efforts to new levels, including compulsory public education, language standardization, military conscription, and a proliferation of nation-related imagery. The most important symbols were associated with the imperial family and State Shinto mythology, but flags, maps, and knowledge about famous sites were also important symbols of national belonging.

The importance of maps for marking out and claiming territory was brought home after the expedition of Commodore Matthew Perry and American 'black ships.' Soon after the Convention of Kanagawa with the U.S., the Tokugawa signed the Treaty of Shimoda in 1855, trying to fix the border between Japan and Russia in the Kurils. In 1875, Japan and Russia signed the Treaty of Saint Petersburg, which ceded the Kurils (千島諸島 Chishima shotō) to Japan in exchange for the entirety of Sakhalin (Karafuto) being ceded to Russia, although Japanese could continue to reside in the southern portion of Sakhalin (the southern half of Sakhalin was ceded to Japan in the Treaty of Portsmouth in 1905).

On Hokkaido, the Tokugawa had been anxious about Russian intentions since the late 18th century, especially since the indigenous Ainu population was restive. After the Meiji Restoration, a group of Tokugawa loyalists held out on Hokkaido against the new Meiji government for months, and this, along with continued concerns about Russia's intentions, led to dedicated efforts to develop and incorporate the island.

Stylistically, this map represents the height of Meiji-era (1868 - 1912) cartographic tradition - wherein western style cartographic standards, lithographic printing, and imported high-contrast inks, were combined with Ukiyo-e color traditions and aesthetic values. This map falls in a cartographic lineage that begins with the Meiji Restoration in 1868 and continued through about 1895. The new style was often employed by upstart printers, including Matsuzaki Hanzō, seeking to unseat long-established printing houses. Such maps began to fall out of fashion near the turn of the century, when they were supplanted by more reserved printed color.

This map is dated October 20, 1881 (Meiji 14). The map was drawn and compiled by Suzuki Dōō (鈴木道央) and published by Matsuzaki Hanzō. It is held by a handful of institutions in Japan, Stanford University, and the University of California Berkeley, but is scarce to the market.