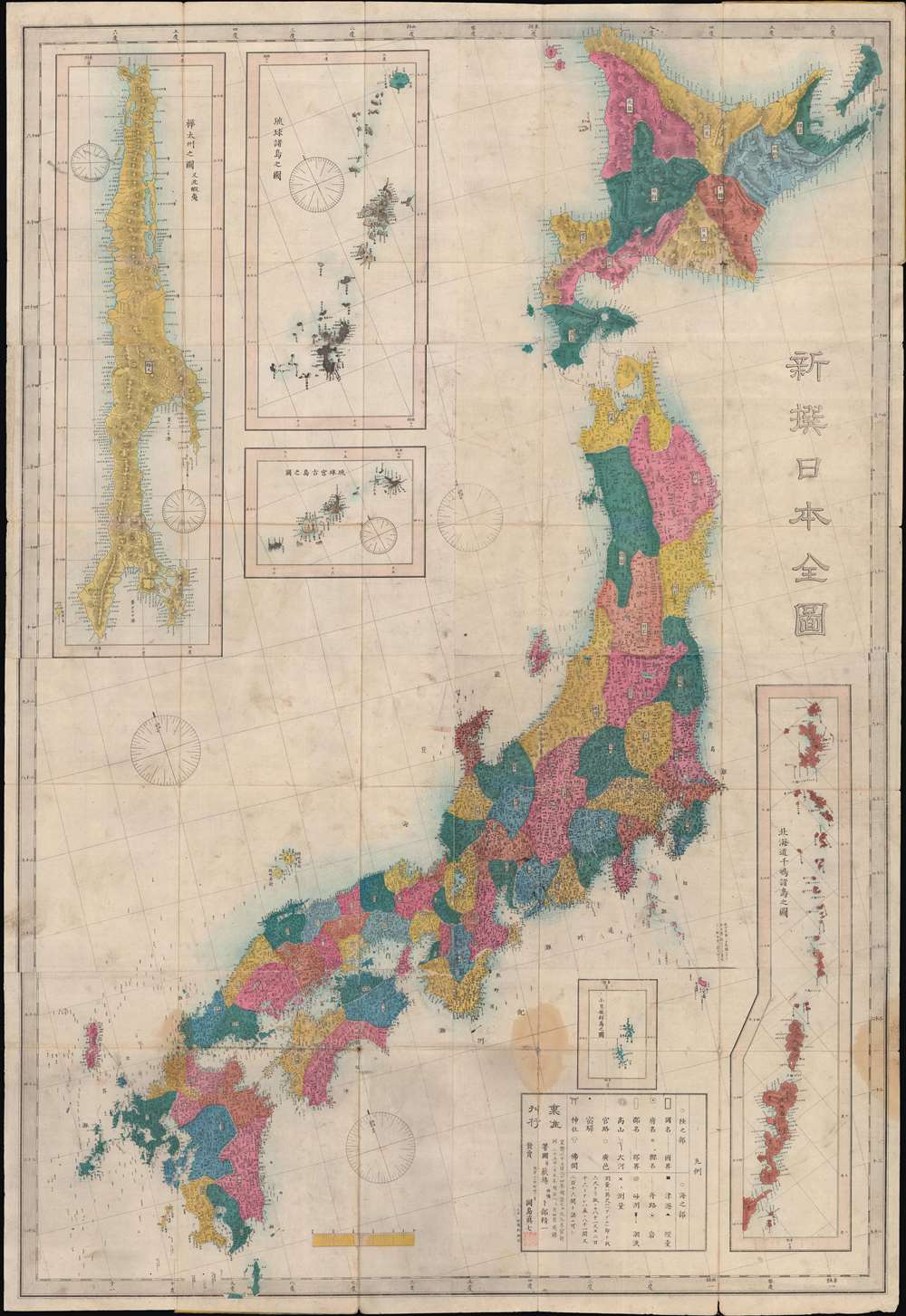 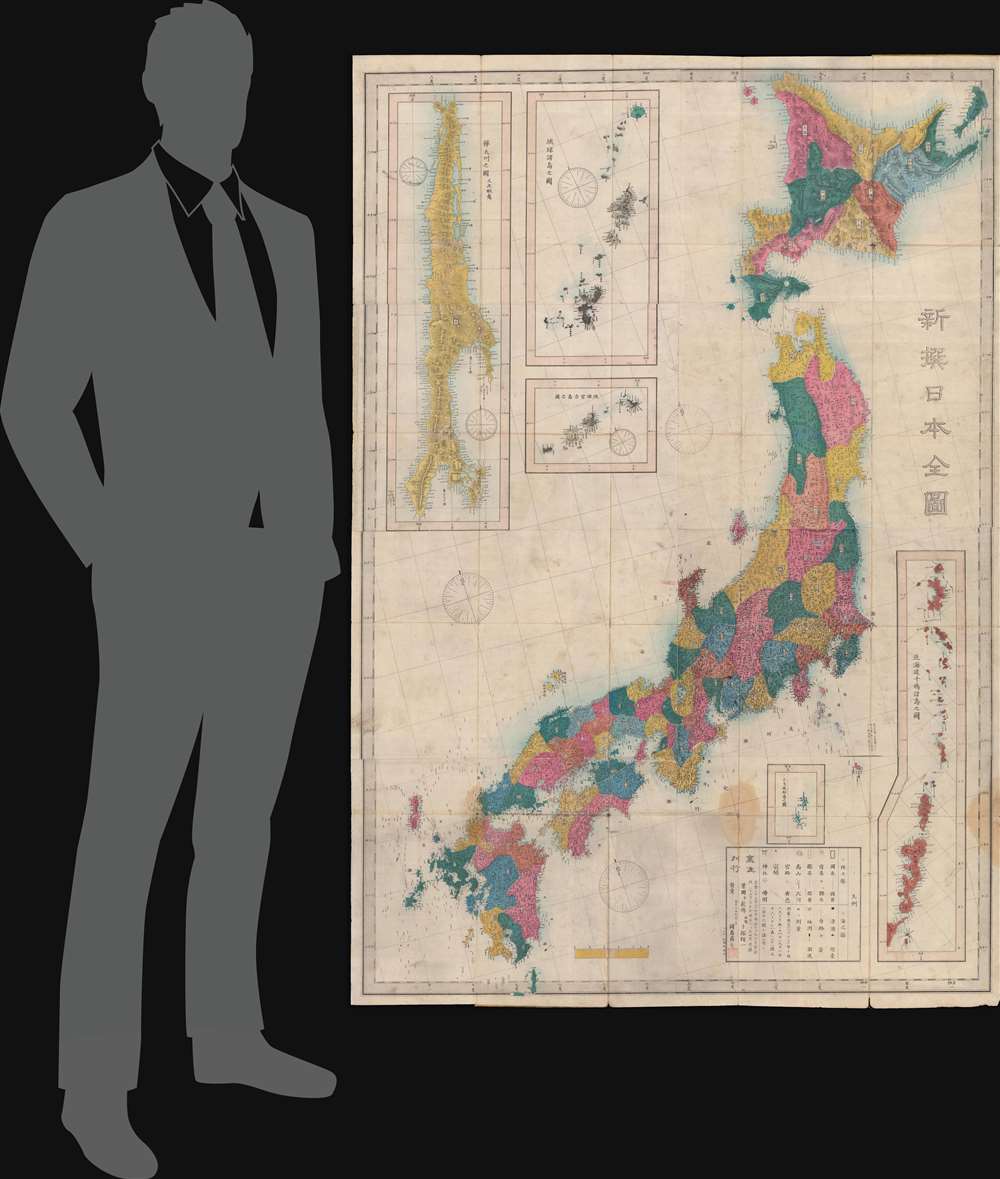 This is a noteworthy 1875 (Meiji 8) Urabe Seiichi map of Japan, including Sakhalin and the Kuril, Ogasawara, and Ryukyu Islands. It was made early in the Meiji period and reflects the tremendous territorial, technological, and cultural changes underway in Japan at that time.

The map's legend is divided in two, with land features (administrative divisions, major roads, Buddhist temples and Shinto shrines, etc.) on top and maritime features (ports, lighthouses, sea routes, etc.) at bottom. At bottom, below the compass, is a scale of 50 ri (里, about 2.44 miles). Latitude and longitude lines are noted at the margins, with the prime meridian (零度) running through Tokyo.

This map was made soon after a series of fundamental changes in Japan's administration and territorial division that represented a staggering break with the past. Within three years of the Meiji Restoration, the feudal domains of daimyo were abolished and replaced by a system of prefectures that still form the basis of local administration.

Prior to the Tokugawa period, Japan was a patchwork of small feudal domains without a true national identity, language, or ruler. However, when the Tokugawa unified Japan in the early 17th century, a solid sense of national identity and national geography began to take shape. There seems to have been an intellectual shift in Japan across the Tokugawa period towards a more 'Westphalian' notion of sovereignty, including comprehensive maps of national territory, due to Japan's (albeit limited) interaction with outside world.

Despite their reputation for xenophobia and a lack of interest about the outside world, the Tokugawa did in fact have some sense about growing foreign threats and made efforts as early as the late 17th century to strengthen control over frontier regions. Moreover, Japan had been drifting away from adherence to the Chinese-centered regional system for several centuries, and Japanese Neo-Confucian intellectuals became especially disillusioned after the 1644 conquest of China by the Manchu Qing.

The importance of maps for marking out and claiming territory was brought home after the expedition of Commodore Matthew Perry and American 'black ships.' Soon after the Convention of Kanagawa with the U.S., the Tokugawa signed the Treaty of Shimoda in 1855, trying to fix the border between Japan and Russia in the Kurils. The month after this map was distributed, Japan and Russia signed the Treaty of Saint Petersburg, which ceded the Kurils (Chishima shotō 北海道千島諸島) to Japan in exchange for the entirety of Sakhalin (Karafuto) being ceded to Russia, though Japanese could continue to reside in the southern portion of Sakhalin (the southern half of Sakhalin was given to Japan in the Treaty of Portsmouth in 1905).

On Hokkaido, the Tokugawa had been anxious about Russian intentions since the late 18th century, especially since the indigenous Ainu population was restive. After the Meiji Restoration, a group of Tokugawa loyalists held out on Hokkaido against the new Meiji government for months, and this, along with continued concerns about Russia's intentions, led to dedicated efforts to develop and incorporate the island.

Similarly, in the Ogasawara (or Bonin) Islands, which were historically unpopulated, the Tokugawa attempted to colonize the islands after several foreign vessels (including Perry's) stopped there and a handful of Westerners even settled there. Here too, Meiji reformers built on the base of Tokugawa efforts to more directly incorporate and settle the islands.

Finally, in the Ryukyus, the Meiji leaders used the long-standing vassal-suzerain relationship between the Ryukyu Kingdom and the domain of Satsuma to claim sovereignty, in opposition to the Qing Dynasty, to whom the Ryukyu kings had also traditionally paid tribute.

Therefore, this map is a reflection of Japan's growing ambitions and self-confidence in staking a claim to territory in the face of powerful adversaries.

Japan Branching Out into the World

Japan in the 1870s was undergoing a dramatic modernization drive and was engaging more in the affairs of the world. At that time, Japan was looking to learn from and emulate Western powers, including their colonial empires, but Japan's ambitions were also causing tension with these same powers in East Asia.

Notably, Japan's greater incorporation of Hokkaido and claims on the Kuril Islands and Sakhalin raised tensions with Tsarist Russia, a preview of much greater conflicts over Korea and Manchuria several decades later (for its part, Russia had recently constructed Vladivostok and tried to seize the island of Tsushima).

Stylistically, this map represents an early example of the distinctive Meiji-era (1868 - 1912) cartographic tradition - wherein western style cartographic standards, lithographic printing, and imported inks, were combined with Ukiyo-e color traditions and aesthetic values. This map falls in a cartographic lineage that begins with the Meiji Restoration in 1868 and continued through about 1895. The new style was often employed by upstart printers, including Urabe Seiichi, seeking to unseat long-established printing houses. Such maps began to fall out of fashion near the turn of the century, when they were supplanted by more reserved printed color.

This map was first issued, as here, in April 1875 (Meiji 8) by Urabe Seiichi (卜部精一). It was published and distributed by Okajima Shinshichi (岡島眞七). A second printing by Garyōken (臥龍軒) followed in 1879 (Meiji 12). We note examples held by the University of California Berkeley and several institutions in Japan, but the map is scarce to the market.

Urabe Seiichi (卜部精一; fl. c. 1873 - 1876) was an Osaka-based painter and calligrapher of the early Meiji period. Aside from several maps of Japan and the world, he published a glossary of important terms for studying Japanese history and foreign relations (大日本史・日本外史実名画引). Learn More...