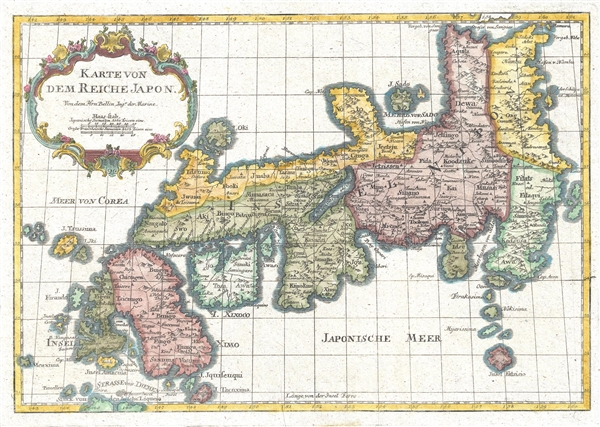 This is a beautiful 1752 Bellin map of the empire of Japan. Centered on the Bay of Osaka, this map covers from Hirado (here identified as I. Firando) and Nagasaki to Akita (Aquita), to include most of Tokugawa (edo) era Japan. The island of Hokkaido is not included in this map. Various towns, harbors, bays, provinces, mountains and daimyo are noted, although many are speculative.

The map overall is highly inaccurate. Shikoku Island (here identified as I. Xixoco) appears to be almost square with a deep inlet on its northern side, while Kyushu (Insel Ximo) is slanted to the east. On the island of Honshu (Insel Nippon), the Aomori Prefecture is foreshortened while the Oki Islands appear exaggerated. The Shimane prefecture and the Noto Peninsula are also distorted. The sea between Japan and Korea, whose name, either the 'Sea of Korea', 'east Sea', or the 'Sea of Japan,' is here identified in favor of Korea (Meer von Corea).

Historically, Korea has used the term 'east Sea' since 59 B.C., and many books published before the Japanese annexed Korea make references to the 'east Sea' or 'Sea of Korea'. Over time, neighboring and western countries have identified Korea's east Sea using various different terms. The St. Petersburg Academy of Sciences referred to the east Sea as 'Koreiskoe Mope' or 'Sea of Korea' in their 1745 map of Asia. Other seventeenth and 18th century Russian maps alternate between 'Sea of Korea' and 'eastern Ocean'. The 18th century Russian and French explorers Adam Johan von Krusenstern and La Perouse called it the 'Sea of Japan', a term that became popular worldwide. Nonetheless, the last official map published by the Russians name the east Sea the 'Sea of Korea'. The name is currently still a matter of historical and political dispute between the countries.

A rococo style title cartouche is included in the upper left quadrant. This map was published in the 1752 German edition of A. F. Prevost's Histoire Generale des Voyages.

Lutz, Walter, OAG 111
Looking for a high-resolution scan of this?