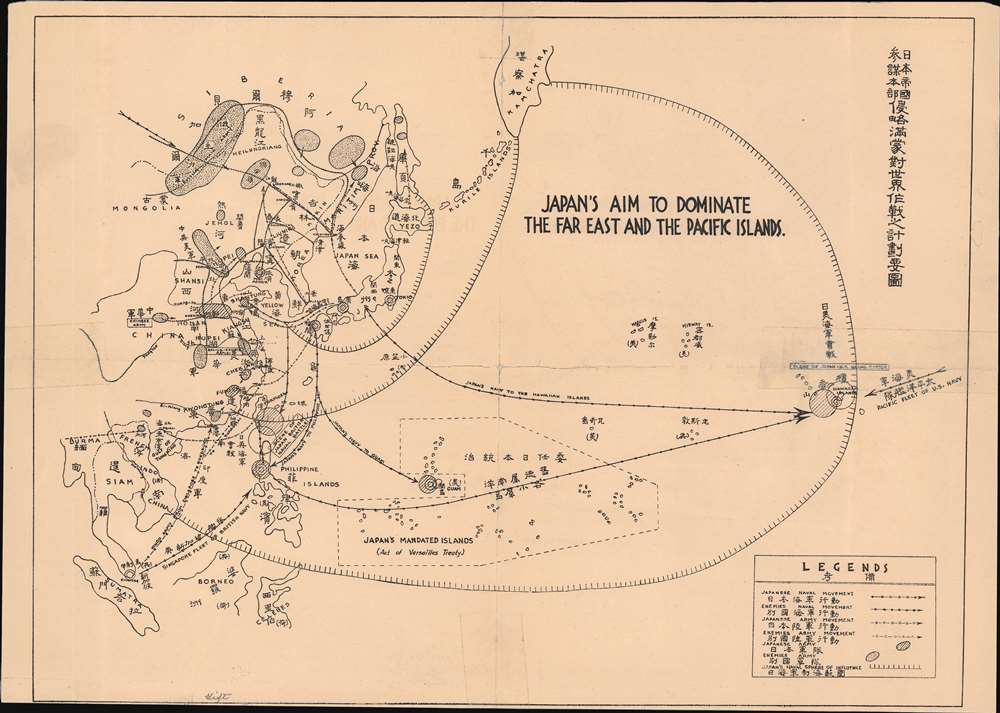 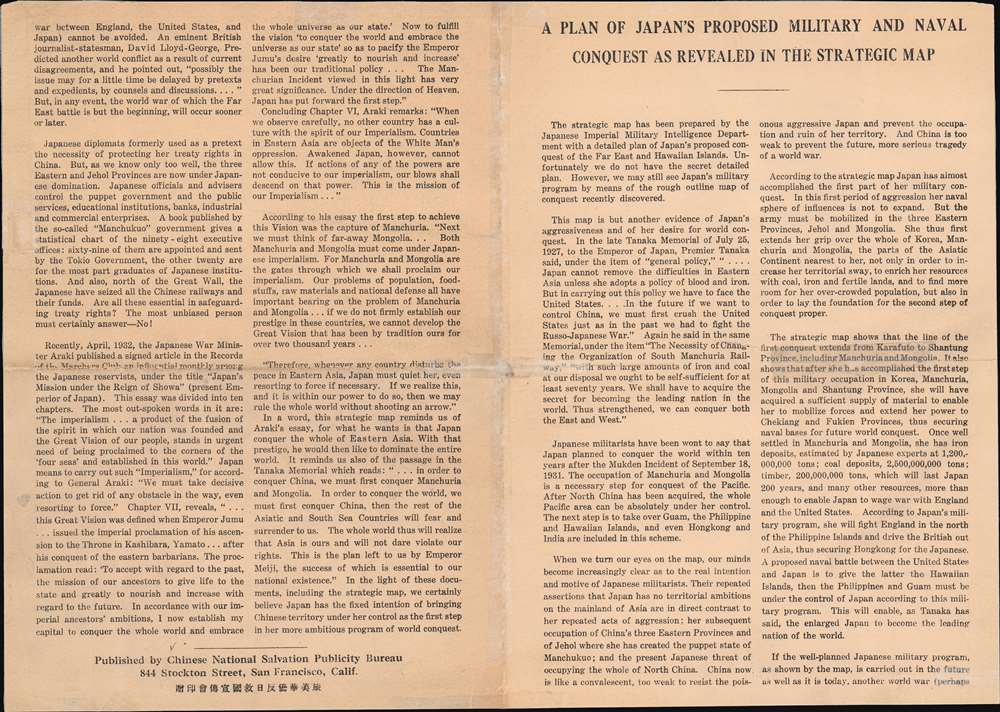 An intriguing c. 1933 anti-Japanese propaganda map pamphlet published in San Francisco prior to the outbreak of World War II. The map, and the text on the verso, claim to reveal Japan's imperialist plans for domination of the Asia-Pacific, including the seizure of Hawaii, eight years before the attack on Pearl Harbor. The map is strikingly prescient, outlining Japanese plans in detail, including the bombing of Pearl Harbor, the attack on the Philippines, and the seizure of Singapore.

The strategic map has been prepared by the Japanese Imperial Military Intelligence Department with a detailed plan of Japan's proposed conquest of the Far East and Hawaiian Islands. Unfortunately, we do not have the secret detailed plan. However, we may still see Japan's military program by means of the rough outlines map of conquest recently discovered.

The map covers East Asa and the Pacific from Burma to Hawaii and from Kamchatka to the Celebes. Arrows indicate Japanese attack plans, with shading indicating enemy armies.

The document itself is undated, but it does reference publications as late as 1932. Another example, which was sent to the Library of Congress, bears a manuscript note that it was sent there by the 'Kuo Min Tang' on May 13, 1933. The layout of the text on the verso suggests that the map was intended to accompany some sort of bound volume, possibly a later edition of the Tanaka Memorial, an English version of which was also published by the San Francisco Chinese National Salvation Publicity Bureau. The present map, like the Library of Congress example, exhibits a fold metric, and there is no evidence that it was ever bound.

This map is closely related to the Tanaka Memorial, which is referenced on the verso. The Memorial is a supposed secret document discovered by KMT intelligence in 1927. Although no one has ever seen the original document, it is said to be a 13,000-word petition presented by Prime Minister Baron Tanaka Giichi to Emperor Hirohito on July 25, 1927, outlining a program of expansion extending Japanese power into Manchuria, China, and Mongolia, thus setting the stage for eventual world conquest. The document is controversial, with some claiming it to be a hoax. When the KMT initially began circulating it in Asia, America, and Europe, Japan was quick to deny it. However, it can be argued that the memorial is alarmingly prescient in its description of Japan's Pacific War strategy and its eventual attack on Hawaii and conflict with the United States.

In the 1920s and 1930s, China was in trouble. Colonialism, the fall of the Qing, and the rise of the Kuomintang led to political destabilization. The increasingly aggressive and imperialist Japanese forces acquired greater and greater power, taking over Manchuria, controlling railroads, and instigating political and military confrontation. The Kuomintang (the Chinese Nationalist Party) recognized the depth of the Japanese threat, but the rest of the world, with problems of its own and isolationist identities, preferred to ignore the danger. The KMT thus established the China National Salvation Publicity Bureau, first in China, but then with offices throughout Asia, in Europe, and the United States. Essentially a propaganda arm of the KMT, the goal was to generate anti-Japanese pro-Chinese sentiment in the hopes of garnering international support against Japan. Unfortunately, at the time, the world would not listen.

This map was published by the Chinese National Salvation Publicity Bureau, located at 84 Stockton Street, San Francisco. The CNSPB was a propaganda arm of the Kuomintang that operated both in China and through various subsidiaries abroad. The San Francisco Bureau, which published this map, was located at 844 Stockton Street, today the location of the Sun Yat-Sen Memorial Hall. We dated it to 1933, as above, based on the notes associated with the LOC example and the verso content. Only two other examples are known, one of which is cataloged in OCLC and is part of the collection at the University of Illinois at Urbana Champaign.

Good. Stabilization verso repairs along centerfold and here and there on margins and old fold lines. Slight loss. Some archival tape on recto.