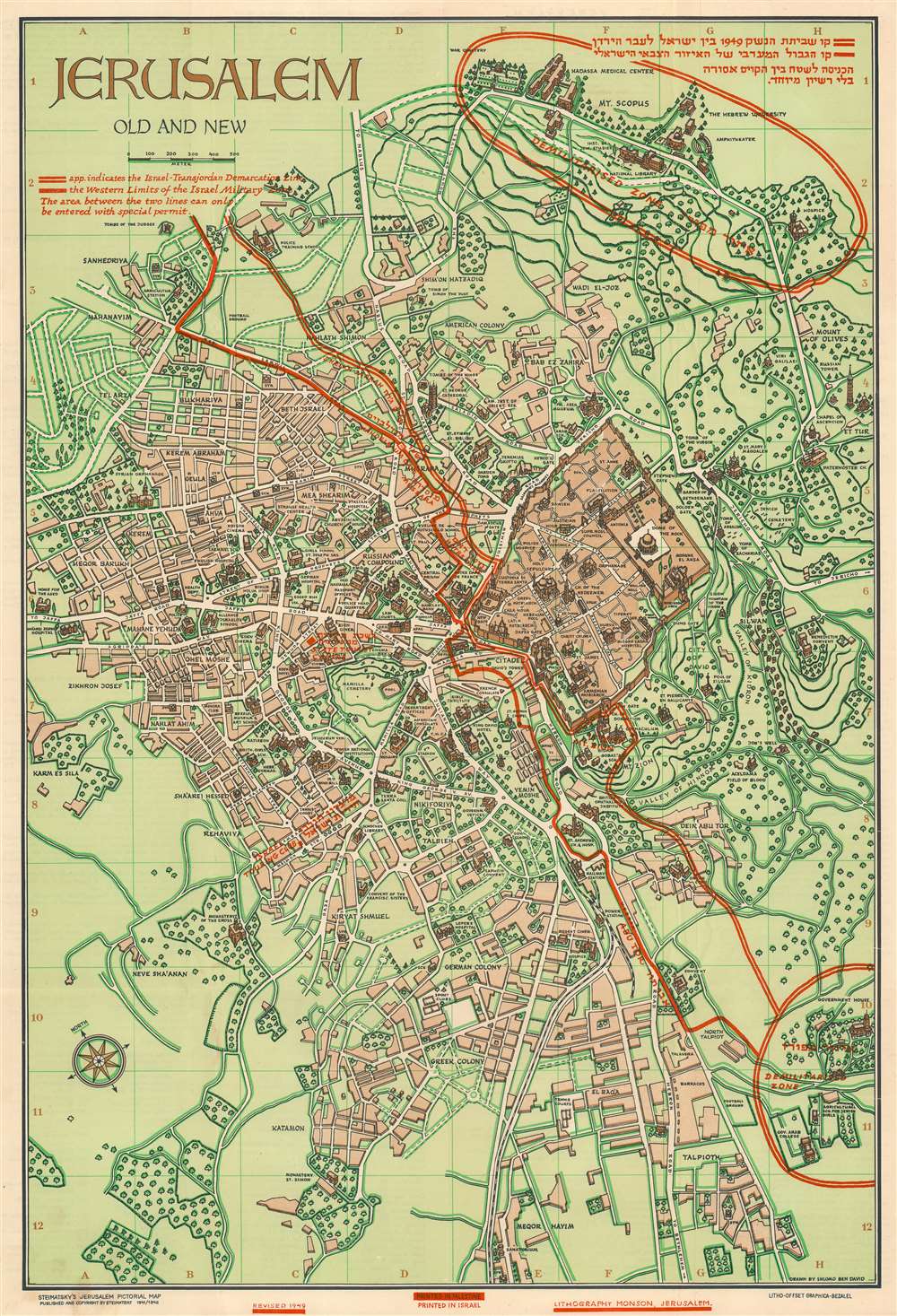 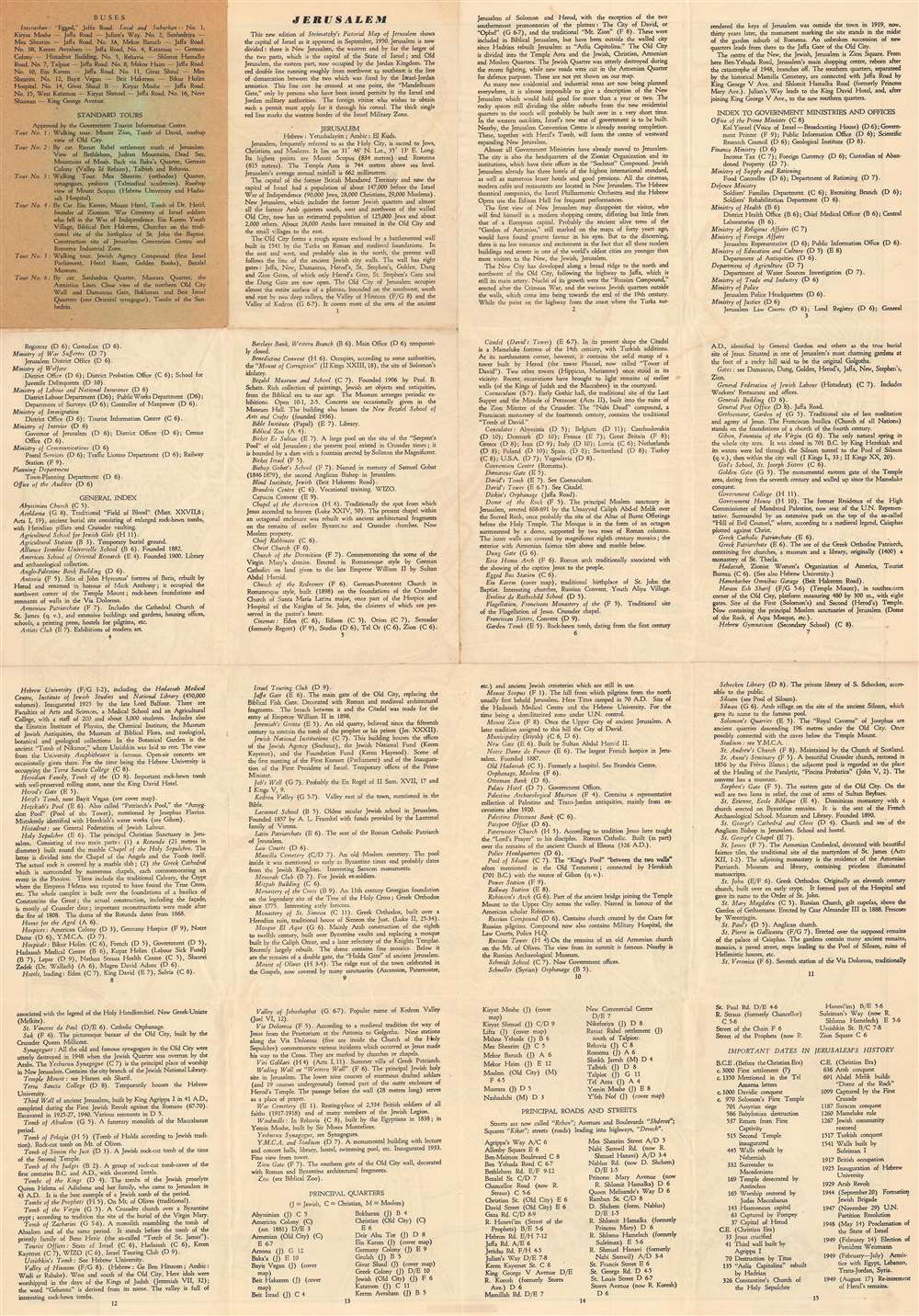 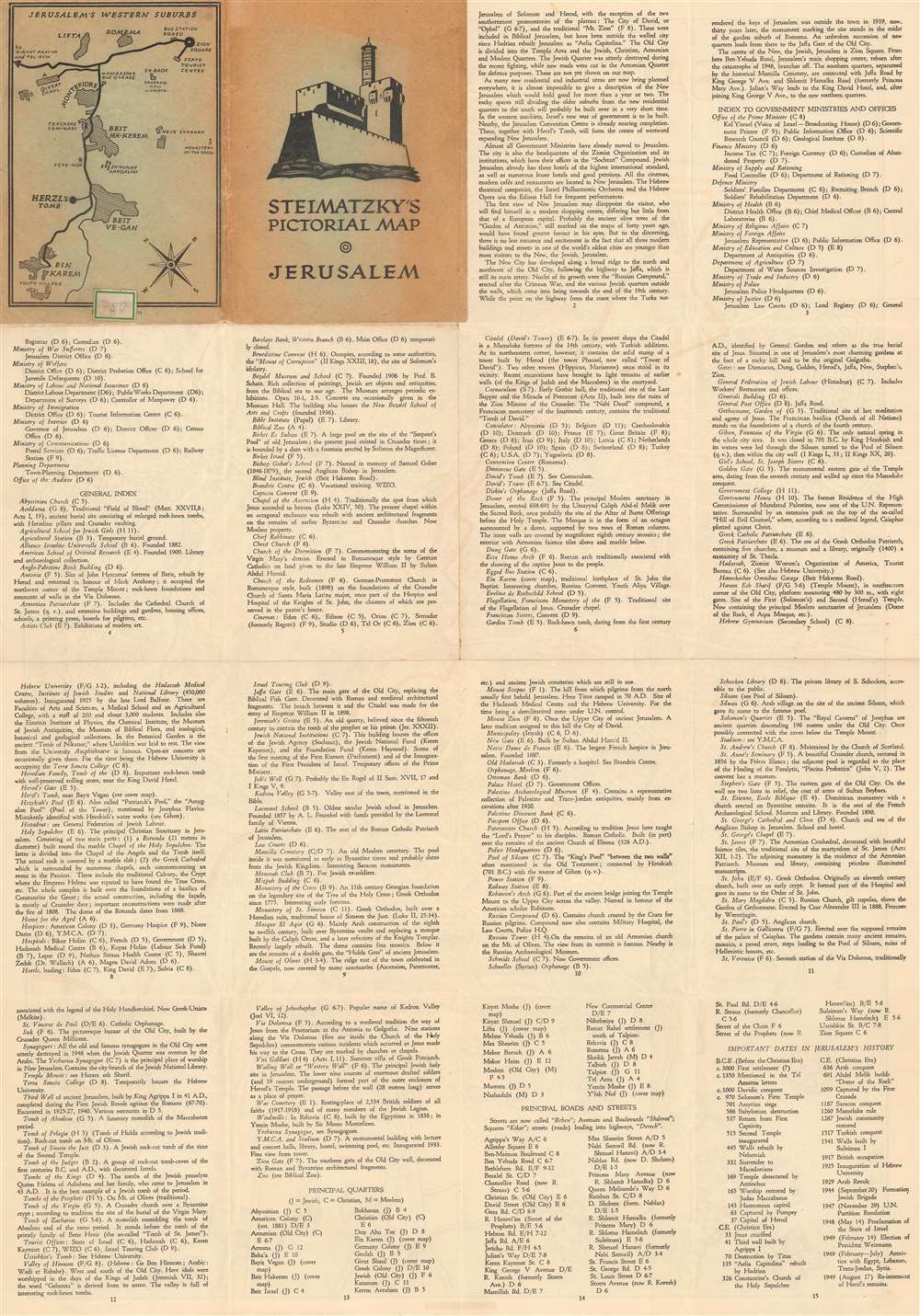 This is a 1949 Steimatzky pictorial map of Jerusalem. The map boldly illustrates the 1949 'Green Line' (although it's illustrated here in red). The 'Green Line' separated Israeli and Jordanian-controlled areas of Jerusalem following the 1948 Arab-Israeli War.

Known as 'The Green Line', red overprinting highlights territorial divisions within Jerusalem after the 1948 Arab-Israeli War and before the 1967 Six-Day War, when Israel seized East Jerusalem, the West Bank, Gaza Strip, and Golan Heights. The left (or west) side of the map is territory controlled by Israel, while the right (or east) side of the map is controlled by Transjordan, an Arab nation. These zones are separated by a 'No Man's Land' that winds its way through Jerusalem around important sites, including the Old City (which fell on the Arab side of the line) and Dormition Church (which fell on the Jewish side). Two enclaves were controlled by the United Nations, these are circled in red and labeled 'Demilitarized Zone' in both English and Hebrew.

The 'Green Line' agreement was never meant to signify permanent international borders, only a temporary demarcation line between Israel and Jordan following the 1948 Arab-Israeli War. The 'Green Line' even extended through Jerusalem, dividing the city into East Jerusalem, which was part of the Kingdom of Jordan, and West Jerusalem, the capital of the newly created State of Israel. When the ceasefire was finally declared, an Israeli and Jordanian commander met in an abandoned house to outline the boundaries of the ceasefire. The Israeli commander used a green wax pencil to outline Israeli-controlled positions, while the Jordanian commander used a red pencil to outline positions under Jordanian control, with the area between the two lines becoming a No Man's Land. Neither commander believed that this informally arrived at agreement represented anything more than a temporary ceasefire line, meaning that little notice was given to inaccuracies and errors in their work due to the thickness of the pencils, deviations in the drawings, or segments of discontinuous lines.

Later, during the meetings in Rhodes to hammer out the 1949 Armistice Agreements, the map drawn by the commanders was found to be the only official document indicating the line dividing Jerusalem agreed upon by both parties. Thus, the informality and the inaccuracies went from establishing a ceasefire to a binding international border. This meant that neighborhoods, streets, and even houses became contentious international disputes, as the line drawn was rough at best. The border was fortified, with military positions springing up all along the wall. Included in this agreement was an Israeli-controlled area on Mt. Scopus, which is encircled here by the same red line that bisects the city. A bi-weekly convoy to the Israeli enclave on Mt. Scopus crossed the border between the two states through the Mandelbaum Gate.

Depicting the city from Karem es Sila to El Tur and the Mount of Olives and from the Hadassa Medical Center, the Hebrew University, and Mt. Scopus to Meqor Hayim, pictorial vignettes highlight important sites throughout the city. Many of these are illustrated in profile, with the Old City and the Temple Mount as the focal point. Surrounded by walls, several buildings within the Old City, such as the Holy Sepulcre, St. Anne's, the Supreme Muslim Council, and several gates are labeled. On the Temple Mount, the Dome of the Rock and the Al Aksa Mosque are illustrated. Some of the locations illustrated outside the Old City include the Citadel, the Church of Dormition, the Tomb of the Virgin, the Tombs of the Kings, and several monasteries and convents. Neighborhoods throughout the city are labeled, along with streets and the railway which enters the city near the bottom of the map.

This map was drawn by Shlomo ben David and originally published in 1942. The present edition was updated in 1949 to reflect the 'Green Line' Armistice Agreement, printed by Lithography Monson in Jerusalem, and published by Steimatzky. This map is well represented in institutional collections.