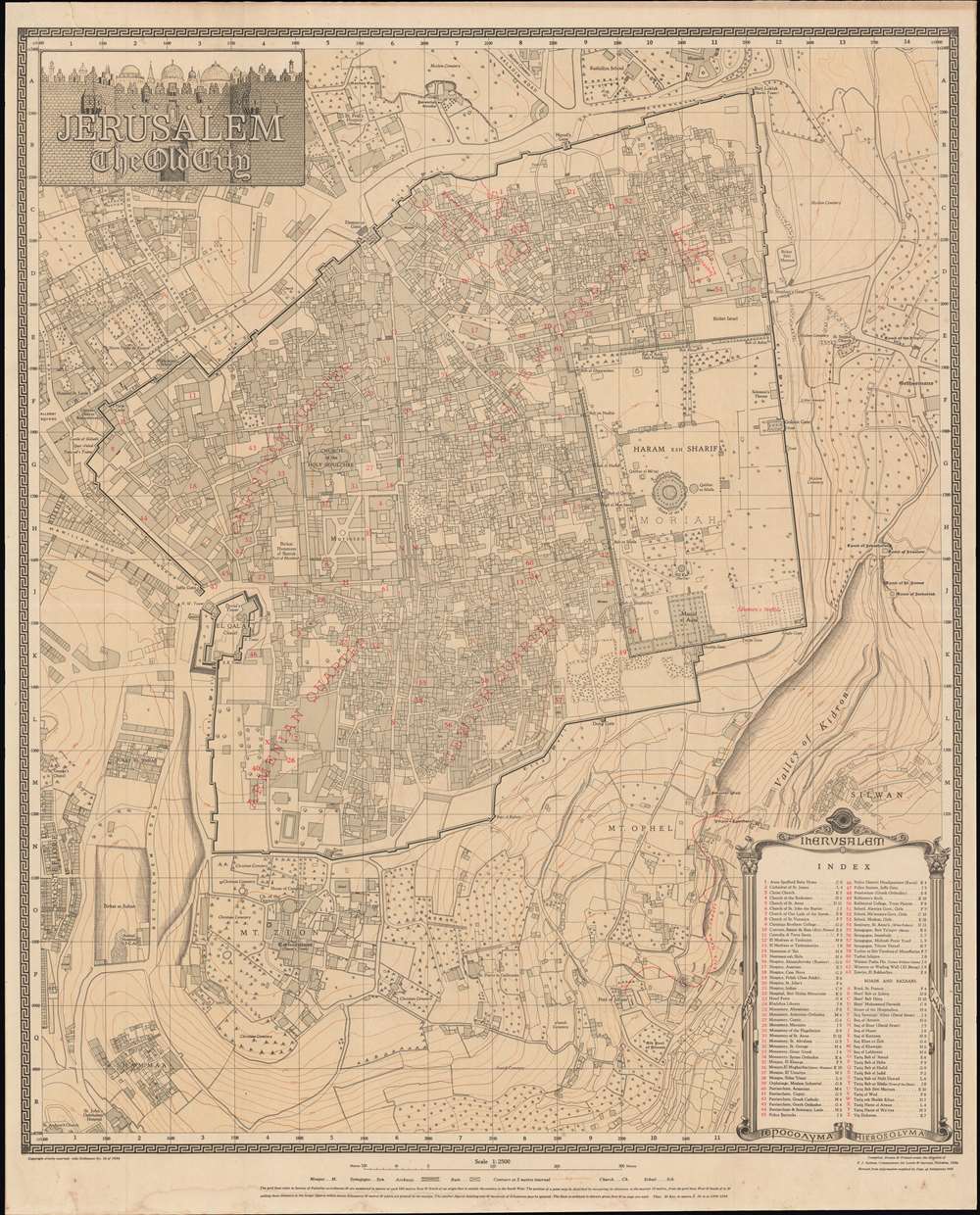 This is a second edition 1945 Frederick John Salmon city plan or map of Jerusalem's Old City. Notable sites are identified, with particular emphasis on Temple Mount. The Dome of the Rock, the Al Aqsa Mosque, and Solomon's Stables (now the El-Marwani Mosque), are labeled, among other sites. Sixty-three sites throughout are numerically labeled and correspond with an index in the lower right. Outside the Old City, King David's Tomb and the Church of the Dormition appear on Mt. Zion. Several hospitals, schools, and cemeteries are also identified.

This map was compiled, drawn, and printed in Palestine under the direction of Frederick John Salmon, the Commissioner for Lands and Surveys. Two editions were published in 1945, a first edition created by Salmon and a second edition with new information supplied by the Department of Antiquities (as here). There is a third edition which is a 'modified reprint,' published in May 1947.

Frederick John Salmon (1882 - July 8, 1964) was a British surveyor, foreign service officer, and soldier. He served in the Ceylon Survey from 1908 through 1930, with the exception of serving on the Western Front during World War I. During the war, he made a name for himself by promoting cooperation between surveying and artillery. He was also particularly enthusiastic about printing and distributing updated maps and using aerial photography to update tactical maps. He became a Fellow of the Royal Geographical Society in December 1918. Between 1930 and 1933, Salmon directed the Lands and Survey Departments in Cyprus, but was named Director of the Palestine Survey at the end of 1932. He began work at the Survey of Palestine on March 27, 1933, and began an initiative to begin a modern topographical mapping of Palestine. He was appointed Commissioner for Lands and Surveys of Palestine and as a member of the Advisory Council to the Government of Palestine in 1935. After a thirty-year career surveying sites around the Empire, Salmon retired on July 13, 1938. His cartographic work is part of the collection at the Royal Geographical Society. Learn More...