1867 Weyss Map of the Battlefied of Sailor's Creek during the U.S Civil War 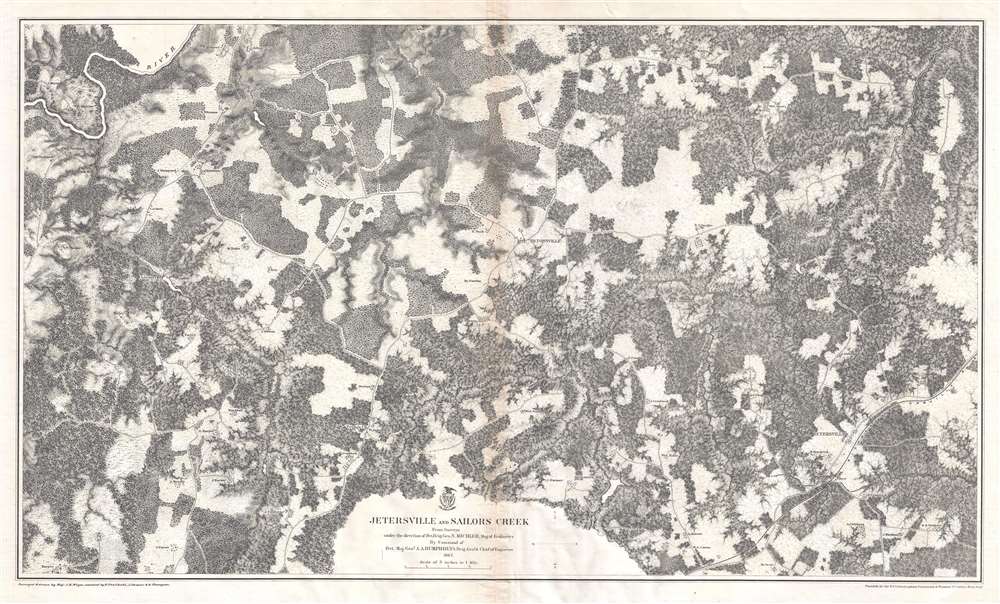 1867 Weyss Map of the Battlefied of Sailor's Creek during the U.S Civil War

The last major battle fought between the Confederate Army of Northern Virginia and the Union Army of the Potomac.

This is an 1867 John Weyss and Nathaniel Michler map of the battlefield of Sailor's Creek, Virginia. The map depicts the region from Morton's Ford on the Appomattox River to Flat Creek and from Captain Miller's homestead to the Harper farmstead. Highly detailed, numerous homesteads, mills, farms, and churches are noted throughout, along with the communities of Jetersville and Dentonsville. The Appomattox River traverses the upper left corner, while the Richmond and Danville Railroad cuts through the bottom right corner. The Richmond and Danville is the railroad used by Confederate President Jefferson Davis and his cabinet when they evacuated Richmond on April 2, 1865.

The Battle of Sailor's Creek

The Battle of Sailor's. Creek was the last major engagement between Confederate General Robert E. Lee's Army of Northern Virginia and Lieutenant General Ulysses S. Grant's Union Army. Fought during the retreat from Richmond, Lee's exhausted and starving troops were attempting to outrun Grant's army, resupply, and join up with General Joseph E. Johnston's army in North Carolina. The Union Army, however, was more than up to the task of keeping pace with the Confederates and took advantage of the Confederate's slow-moving wagon train in the difficult terrain. The Confederates then ran up against the bottleneck of the small bridges crossing Sailor's Creek and Little Sailor's Creek, over which this battle was fought. In reality, the battle was a series of small skirmishes throughout the area, but by the end of the fighting, over a quarter of the Confederate force had surrendered.