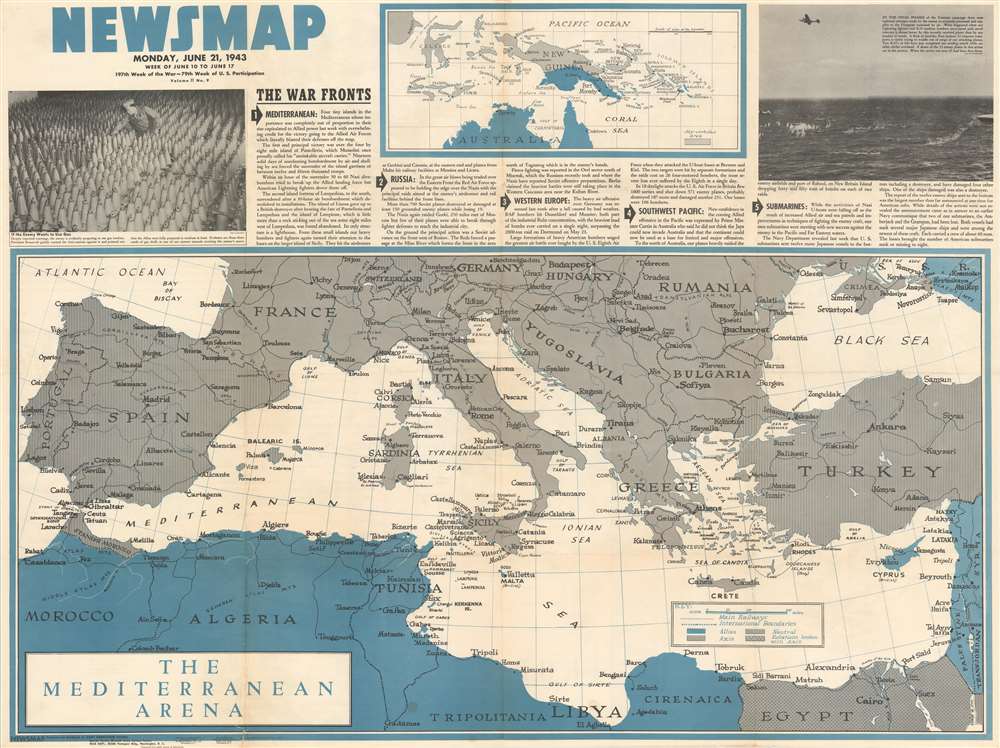 Recounts the capture of four important islands in the Mediterranean.
$300.00

This 1943 Army Orientation Course Newsmap map of the Mediterranean, Europe, and North Africa details Allied operations in the middle of June. Short paragraphs describe five significant events from the past week. The most important, particularly with the benefit of hindsight, garners top recognition: The Allied capture of four small islands in the Mediterranean. Published only a few weeks before the Allied invasion of Sicily, codenamed Operation Husky, the eviction of Italian forces from these islands removed one of the last hurdles to the forthcoming landings. From Sicily, the Allies would jump to mainland Italy, the first Western Allied assault on Axis-occupied Europe. Other actions recounted include brutal fighting on the Eastern Front between the Nazis and the Red Army, British and American aerial bombardments of targets in Germany, and an announcement that U.S. submarines sunk another dozen Japanese ships the previous week.

The Mediterranean and South Pacific Maps

A brilliant blue shades areas occupied by the Allies, including the four islands discussed above. Gray regions mark Axis occupied countries and Spain, Portugal, and Turkey are marked as neutral.

This map was created and distributed by the Army Orientation Course in 1943. Seven examples are cataloged in OCLC and are part of the institutional collections at the Boston Athenaeum, Pennsylvania State University, Denison University, Davidson College, the Library of Michigan, Southern Illinois University at Edwardsville, and the Denver Public Library.