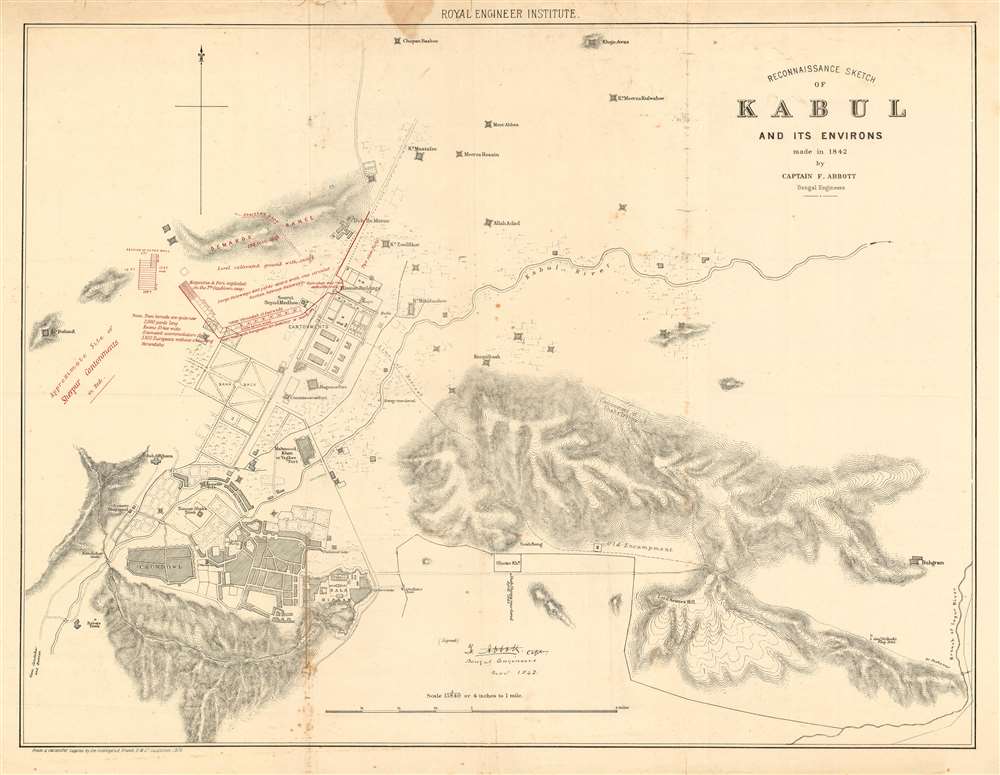 Map of Kabul that traverses both Anglo-Afghan Wars and embodies The Great Game.

This is an 1879 Quartermaster General's Office (QMG) and Royal Engineer Institute city plan or map of Kabul, Afghanistan and environs published during the Second Anglo-Afghan War (1878–1880) to illustrate the 1879 Siege of the Sherper Cantonment. This map is cartographically derived from an earlier survey completed in 1842 during the First Anglo-Afghan War under Captain Frederick Abbott of the 1842 Kabul Expedition. General Pollack's camp established during the 1842 Kabul Expedition is marked by a flag.

Red overprinting marks the Sherpur Cantonment, a British military encampment established during the Second Anglo-Afghan War and the site of the 1879 Siege of the Sherpur Cantonment by Afghan forces under Mohammed Jan Khan Wardak. The siege took place between December 15 and December 23, 1879 with the goal of overthrowing the British puppet Emir Mohammad Yaqub Khan and replacing him with the anti-British Mohammed Jan Khan Wardak. Jan's forces outnumbered the British and initially posed a major threat to fortified the British cantonment. Nonetheless, British officers were able appeal for rapid reinforcement. When news of an incoming British relief column reached Mohammad Jan, he made a desperate bid, storming the cantonment. Jan's assault was repulsed and, fearing the relief force, the Afghan army dispersed. Any armed Afghan subsequently found in the area was hunted and killed. The Sherpur Cantonment has survived to the present day as a British cemetery.

The First Anglo-Afghan War began in 1839 as a 'check' on Russian expansion into South Asia. The British, fearing Russian incursions into Afghanistan (and thus India), sought to conquer Afghanistan as 'buffer zone'. The British invaded and captured Kabul in November 1840, then spent the next year attempting to pacify the restless population. By November 1841, a popular uprising had broken out in Kabul leading to the murder of William Hay Macnaghten, British Minister to puppet emir Shah Shujah. Macnaghten's murder, and the untenable tactical situation outside Kabul, led British commander General William George Keith Elphinstone to surrender Kabul on presumption of safe passage to Jalalabad. His force, numbering over 16,000 soldiers and their families, were ambushed and massacred en route.. Only a British surgeon and a few Indian sepoys reached Jalalabad.

The Kabul Expedition was a punitive campaign fought to avenge the massacre of the British army retreating from Kabul. The British had several garrisons in Afghanistan in 1841, many of which were attacked during the winter of 1841 - 42. A force, led by Major General George Pollock, successfully broke through the Khyber Pass from India under orders to raise the siege at Jalalabad. Arriving, they found that the Jalalabad garrison had broken the siege on it own. Nonetheless, by August British authorities decided to abandon Afghanistan. British generals, commanded to retreat but hungry for revenge ordered the garrison at Kandahar to 'retreat' via Kabul, a detour of over 300 miles. Likewise, the garrison at Jalalabad was given permission to cover the retreat, meaning that they too could advance. Both forces encountered fierce resistance and won costly victories. When Pollock and his men arrived at Kabul, they found the British hostages had been freed and the city was deserted. Pollock ordered that Kabul's covered bazaar be destroyed in retribution, but the discipline of his army broke down, and besides the destruction of the bazaar there was widespread looting and destruction. The retreat from Kabul proved to be arduous, as the column was ceaselessly harassed by guerrilla snipers until within sight of Jamrud, at the foot of the Khyber Pass. The Kabul Expedition was the last engagement of the First Anglo-Afghan War.

The Second Anglo-Afghan War was fought between the British Raj and the Emirate of Afghanistan, which was ruled by Sher Ali Khan. Split between two campaigns, the first took place between November 1878, when the British invaded Afghanistan, and May 26, 1879, when the British signed the Treaty of Gandamak. The second campaign began with the October 6, 1879 defeat of the Afghan Army at Charasiab by the Kabul Field Force under Sir Frederick Roberts. Roberts occupied Kabul two days later and made camp at the Sherpur Cantonment. The Siege of the Sherpur Cantonment, discussed above, followed. Yaqub Khan was forced to abdicate, and, after some indecision, the British installed his cousin Abdur Rahman Kahn as a puppet emir. Enraged, Ayub Khan, Yaqub's brother, led a revolt in Herat and defeated a British detachment at the July 1880 Battle of Maiwand, then proceeded to besiege Kandahar. In response, Roberts led the main British force out of Kabul and defeated Ayub Khan at the September 1 Battle of Kandahar, officially ending the war. Abdur Rahman Kahn confirmed the Treaty of Gandarmak, which granted the Afghans British protection and a subsidy in exchange for ceding Britain Afghan territory and control over Afghan foreign policy.

Perhaps no other artifact that we have come across better encapsulates the Great Game between the British and Russian Empires since it stretches across two of the proxy wars fought by the British during this era. 'The Great Game' was a diplomatic confrontation between the British and Russian Empires over Afghanistan and other territories in Central and Southern Asia. The conflict, rooted in long-standing animosity between Russia and Britain, revolved around Afghanistan, which, while lacking significant resources, was strategically situated. For its part, Russia feared Britain was making commercial and military inroads into Central Asia, an area that had long fallen within the sphere of St. Petersburg. Britain, conversely, feared Russian incursions into India, 'the jewel in the crown' of British Asia. The escalating tensions led to several wars and proxy wars: The First Anglo-Afghan War (1839 – 1842), the First Anglo-Sikh War (1845 – 1846), the Second Anglo-Sikh War (1848 – 1849), and the Second Anglo-Afghan War (1878 – 1880), along with the Russian annexations of Khiva, Bukhara, and Kokand. Then as now, Afghanistan proved a grinding stone on which the great empires of the world diminished themselves, none achieving a definitive victory while wasting massive resources. The Great Game ended on September 10, 1895 with the signing of the Pamir Boundary Commission Protocols, which stabilized the border between Afghanistan and the Russian Empire.

This map was created and published by the Royal Engineer Institute in 1879 'from a retransfer supplied by the Intelligence Branch of the Quartermaster General's Department'. The base map was surveyed and drawn by Captain Frederick Abbott in 1842. One example is catalogued in the OCLC and it is part of the institutional collection at The British Library.


Sir Frederick Abbott (January 8, 1851 - November 4, 1892) was a British engineer of the East India Company and an army officer. Born at Littlecourt, Herftordshire, Abbot attended Warfield before entering the Addiscombe Military Seminary in 1820. He graduated in 1822 and received a commission in India with the Bengal Engineers in 1823. He fought in the first Anglo-Burmese War (1824 - 1826) and distinguished himself at the Battle of Prome in 1825. After returning from Burma he was assigned to Public Works and was promoted to captain in 1832. He married his wife Frances Cox in 1835 and returned to England on leave from 1838 - 1840. Upon his return to India in 1841, Abbott was made the Superintending Engineer of the North West Provinces, where he was responsible for the canals, military works, and all other Public Works of the province. He was soon ensnared by the First Anglo-Afghan War, which had been raging since 1839, and was appointed Chief Engineer for an army being sent to rescue the British garrison at Jalalabad. This force, after arrived at Jalalabad only to find the siege raised, then became part of the punitive Kabul Expedition, which they reached Kabul after a series of fierce battles and occupied it. Two atrocities precipitated the Expedition. The first was the massacre of 16,000 British soldiers and civilians retreating from Kabul supposedly granted safe passage by Akbar Khan, and the second was the murder of Sir William MacNaghten, a British envoy in Kabul, by Akbar Khan, and the mutilation of his body a mob in the Kabul bazaar. As retribution, the decision was made to destroy the bazaar and its beautifully constructed mosque, and Abbott was ordered to carry out this task, an action he regretted for the rest of his life. He then returned to India, where he resumed his post as Superintending Engineer. Four years later he was again called to war and fought in the First Anglo-Sikh War. He distinguished himself at the Battle of Sobraon, where he constructed a bridge across the Sutlej River, for which he was awarded a Companion of the Order of the Bath. He retired from the army on October 1, 1847 at the age of forty-two. Three years later he was appointed Lieutenant-Governor of the Addiscombe Military Seminary, a post he held until the academy was closed in June 1861. After its closure, Abbott held positions on numerous government boards, and was made and Honorary Major-General in 1858. Abbott suffered a stroke on February 7, 1890 and a second on April 15. He never fully recovered from these and died on November 4, 1892. He was preceded in death by both his wife and his daughter, as well as his grandson, who died after being bitten by a rabid dog in India. Learn More...