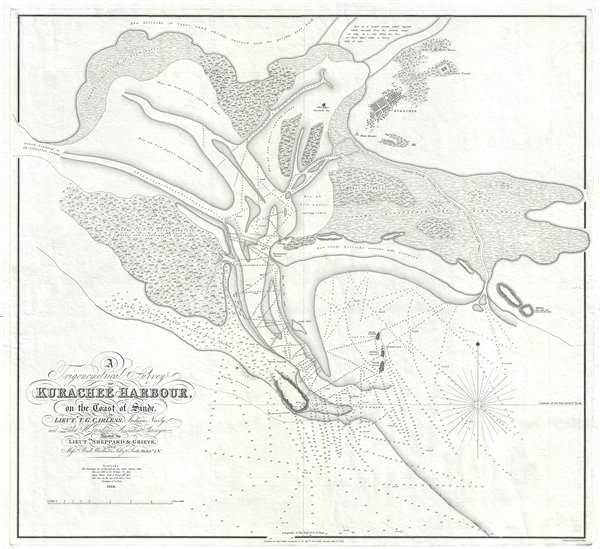 The first surveyed map of Karachi, Pakistan, issued by the East India Company exploratory mission to Sinde in preparation for the February 1839 occupation.

The old fort and city of 'Kurachee,' then, according to Carless, a diverse town of about 14000 appears in the upper right. The survey reveals a port almost inaccessible to large vessels, with a low water depth of only 1 or 2 feet close to the city. Nonetheless, with a tidal variation of about 15 feet, the city could be accessed at certain times of the day and the British East India Company, recognizing the need for an additional defensible port on the Indian Ocean, determined that Karachi was ideally suited. Following the occupation, they began an extensive series of improvements, roughly lasting to 1869, which opened the port fully to deep water shipping at all times. Today Karachi is a major Indian Ocean port and one of the world's largest cities, with a population of nearly 22 million.

The map notes a number of additional important sites, including the 17th century Talpur Dynasty Qasim Fort on Manora Point. The map also notes the ruins of an abandoned English factory just north of the city. Also northeast of the city is the 'Fakeers Tank' or Fakir's Tank, where early travelers to the region, including Leopold Von Orlich, writing in 1845, claimed that the fakirs kept some 30 alligators which were trained 'like so many dogs.'

Although this map was submitted to the government in 1838, following the completion of Carless' survey, it was not published until 1844 by John Walker in 1844. We have found no evidence of an earlier edition and in fact, no other original examples are known, but it is highly likely that at least one such is held in the archives of the British Library.

Thomas Greer Carless (1806 - December 16, 1848) was a British hydrographer and naval officer active in the Indian Navy. Carless distinguished himself in the First Anglo-Burmese War (1824-1826). Following the war, he was assigned to assist Robert Moresby in the important 1831 – 1833 survey of the Red Sea, for which he is today best known. Carless was next assigned to Captain Haines where he produced a hydrographic survey of the South Coast of Arabia. In 1837, he was transferred to Africa in the vicinity of Cape Guardafui (Ras Asir, Somalia) where he surveyed much of the coast. In 1838, Carless was sent to survey the Indus River, work for which he is less well known but which is perhaps his most historically significant. This included the first survey of Karachi Harbor, presaging the 1839 British East India Company occupation of subsequent development of that city as a major port. Carless' work with Moresby in the Red Sea was highly praised for by none other than Richard F. Burton, who wrote in First Footsteps in East Africa,

The beautiful maps of the Red Sea, drafted by the late Commodore Carless, then a lieutenant, will ever remain permanent monuments of Indian Naval Science, and the daring of its officers and men.

He was subsequently variously employed throughout the region, including 1846 survey correction work in the Persian Gulf. There he attained the rank of Commodore and was given command of the Persian Gulf Squadron, but he unfortunately contacted Small Pox shortly after and died in the city of Bushehr (Iran). Learn More...

OCLC 316443633 (facsimile, Library of Scotland)
Looking for a high-resolution scan of this?