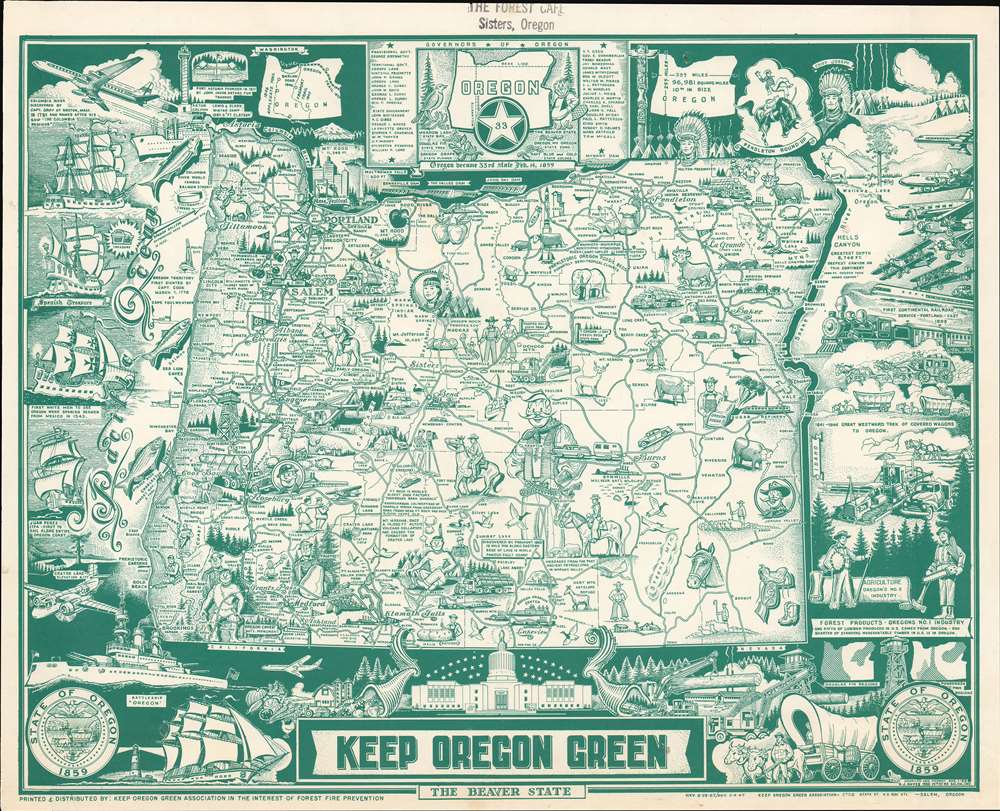 This is a charming 1967 Hugh J. Hayes pictorial map of Oregon in the form of a placemat. Depicting the entire state, countless illustrations reference Oregon's history, topography, and places of interest. Fun facts about the state also abound, some of which include ‘Mt. Mazama, once a 14000 ft. active volcano collapsed and caused the formation of Crater Lake’, ‘Oregon Territory first sighted by Capt. Cook March 7, 1778 at Cape Foulweather’, and ‘Prehistoric Oregon Fossil Beds formerly semi tropical climate’. The illustrations feature cowboys, covered wagons, and Native Americans. Vignettes of historical events surround the map, and include depictions of Fort Astoria, a commemoration of railroad service reaching Portland, and the Battleship Oregon, among others.

This map was originally copyrighted and drawn by Hugh Hayes in 1959 to commemorate Oregon's centennial. The present map was published in 1967 by the Keep Oregon Green Association to prevent forest fires. Two examples are cataloged in OCLC and are part of the institutional collections at the Library of Congress and the University of Oregon. Another example is part of the David Rumsey Map Collection.

Hugh John Hayes Jr. (August 1, 1914 - June 25, 2013) was an American mapmaker, draftsman, and illustrator who spent most of his career working for the Oregon State Department of Forestry. Born in Bear Creek, Oregon, Hugh attended public schools in Wallowa, Washington, and graduated from high school in 1934. He then served in the Civilian Conservation Corps before finding a job as a draftsman with the Oregon State Board of Forestry in Salem, Oregon. During World War II, Hayes entered the U.S. Army on January 16, 1942, served in the 340th Engineer Regiment, and attained the rank of Master Sergeant. He spent sixteen months in Alaska and the Yukon Territory working on the construction of part of the Alaska-Canada Highway. While there, he also created maps, undertook surveys, and drew structural plans. Then he was transferred to the South Pacific, where he spent twenty-one months in Australia, New Guinea, Morotai, and Luzon designing bridges and drawing maps. After receiving an honorable discharge from the Army in November 1945, Hayes returned to the Oregon State Department of Forestry, where he worked until he retired in 1993. During his years at the Department of Forestry, Hayes illustrated field guides of Oregon trees, drew fire protection maps and safety cartoons, and designed plans for bridges and guard stations. Over the course of his career, Hayes also helped illustrated an entomology textbook for Oregon State University drew forest shrubs and plants for the Walt Disney movie 'Bambi.' Hayes married Florence Wilson Ruffner on May 14, 1957, and were married thirty-five years before she died of a heart attack in 1992. Learn More...