1861 Mitchell Map of Kentucky and Tennessee 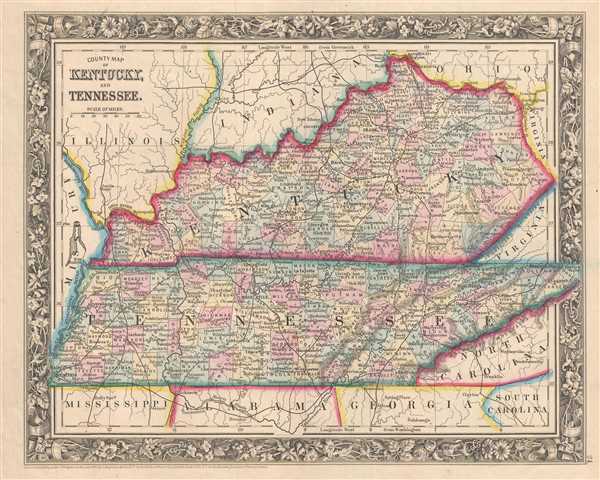 1861 Mitchell Map of Kentucky and Tennessee

Two states that fought on opposite sides of the American Civil War on the eve of the outbreak of the conflagration.

This is an 1861 Samuel Augustus Mitchell, Jr. map of Kentucky and Tennessee, two states that would soon fight each other on opposite sides of the onrushing American Civil War. The map depicts the region from Missouri to Virginia, North Carolina, and South Carolina and from Illinois, Indiana, and Ohio to Mississippi, Alabama, Georgia, and South Carolina.

Kentucky and Tennessee during the Civil War

Kentucky originally declared neutrality because its citizenry preferred the role of mediator between the two sides to 'the wicked purpose of subduing [her] sister Southern states.' Tennessee chose a different path, becoming the last state to declare secession from the Union and join the Confederacy. As it happened, Tennessee saw brutal fighting, and only Virginia experienced more battles. Tennessee also has the dubious distinction of being the only state where a major battle or skirmish was fought in every single county.

Both sides respected Kentucky's neutrality, until Confederate Major General Leonidas Polk ordered Brigadier General Gideon Johnston Pillow to occupy Columbus, a strategic point on the Mississippi River and the terminus of the Mobile and Ohio Railroad (which is illustrated but not labeled here). This move forced Union Brigadier General Ulysses S. Grant, to leave Cairo, Illinois and invade Kentucky at Paducah. In the end, Kentucky's legislature passed a resolution ordering the withdrawal of only the Confederate forces, in opposition to the governor's declaration stating that both sides should vacate the state (Governor Magoffin was a Southern sympathizer). Thus, Kentucky and Tennessee, two states with populations divided over which side to take, ended up on opposite sides of the Civil War.

Highly detailed, individual counties are illustrated, labeled, and shaded different colors to allow for easy differentiation. Cities, towns, and villages throughout the two states are labeled, including Memphis, Nashville, Lexington, Frankfort, and Louisville. Rivers are illustrated as well, though only a small portion of them are labeled, along with the Cumberland Mountains. The whole is surrounded by the attractive floral border common to Mitchell atlases between 1860 and 1865. This map encapsulates the 'brother against brother' mythology and reality that surrounds the membor of the Civil War, as the populations of both Kentucky and Tennessee were extremely divided over whther to support the Union or the Confederacy.