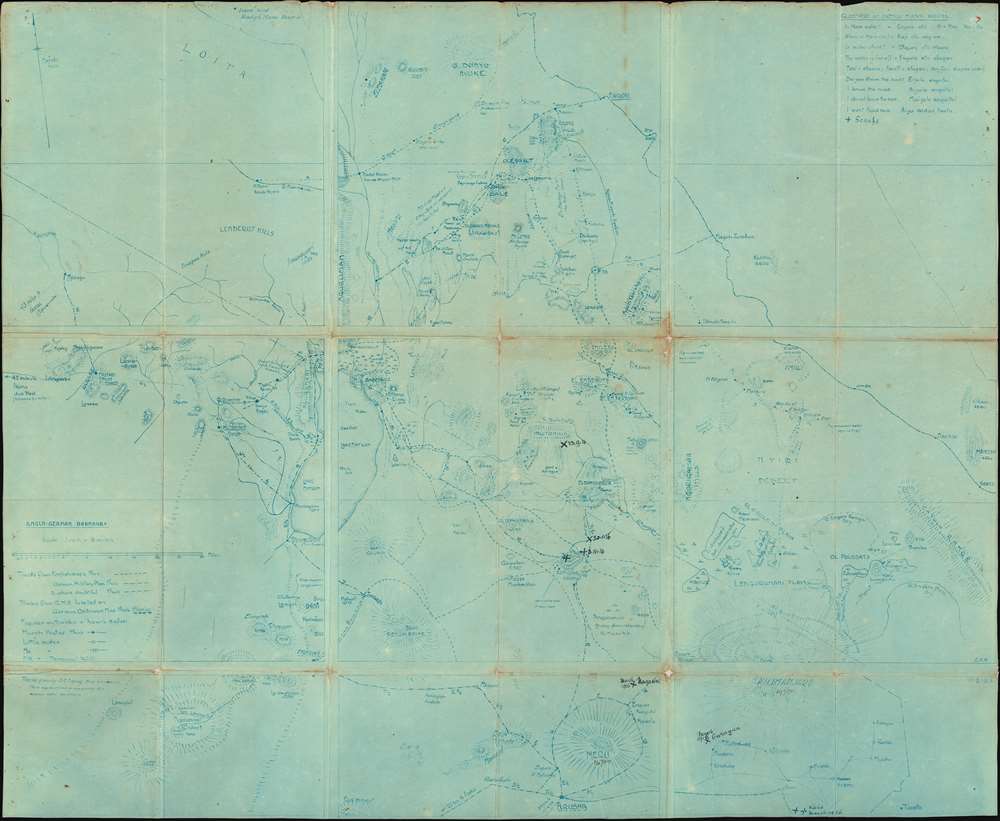 One of the few surviving maps from Meinertzhagan's Nairobi Map Room used for field opperations in the WWI East Africa Campaign.

One of the most extraordinary military maps we have encountered, this is a September 17, 1914 cyanotype British field map of modern-day Kenya and Tanzania. It is the only surviving example of a definitive field map from the World War I (WWI) East Africa Campaign (1914 - 1918). Likely prepared for the British invasion of German East Africa in November 1914 (which was unsuccessful), the map illustrates the border regions of British and German East Africa (modern Kenya and Tanzania, respectively). Based on a detailed reconnaissance of the Serengeti Plain, the map offers a wealth of information critical to guerilla military movement, not commonly available on published topographical maps. There are extensive manuscript annotations, likely by an officer of the East African Mounted Rifles, marking battles and troop movements. The map is printed in the cyanotype technique, likely at the British Army HQ in Nairobi under the supervision of the brilliant but divisive intelligence operative Lt. Col. Richard Meinertzhagen.

The East Africa Campaign, fought between Britain and Germany from 1914 to 1918, was one of the most extraordinary, yet little known theaters of World War I. Unlike in Europe, the conflict in Africa was a frontier guerrilla campaign, pitting the severely outnumbered forces of the ingenious German commander, Lieutenant Colonel Paul Emil von Lettow-Vorbeck, against the over-confident British forces led by the hard-charging Afrikaner general, Jan Smuts. The East Africa theater was one of the few where German forces outmaneuvered and repeatedly defeated the British. The German force of roughly 14,000 troops waged an effective guerilla war against a British-Allied force that, at its height, numbered 300,000 men. As a result, British historians were loath to discuss this 'embarrassment', while German figures very much wanted to forget WWI altogether.

The map is a masterpiece of frontier military cartography, providing all manner of useful information for solders on the move in a guerilla warfare environment. It is presented with clarity and everything essential information devoid of superfluous, distracting details. The scope of the map extends from Arusha and Moshi, in the shadow of Mount Kilimanjaro (the highest point in Africa) and Mount Meru (both of which are depicted), in the south; Taveta, in the southeast; and the up to Nairobi (the capital of British East Africa), in the north; and then down over to the Ngorogoro Crater / Lake Natron area, in the southwest. The prime focus of the map is, as the title suggests, the 'Anglo-German Border' lands. Throughout, the map depicts all of the mountains, ridges and lakes that pierce the Serengeti Plain, which are clearly expressed in hachure, marking the elevations of key peaks. Importantly, the map delineates a section of the route of the Uganda Railway, the lifeblood of the British presence in East Africa, which ran from Mombasa to Kampala (Uganda).

Masai Knowledge and other Sources

A knowledge of the terrain was critical to successful navigation of the region. A slightly disorientated unit could easily find themselves in a cul-de-sac, helpless quarry for enemy ambush. Moreover, during the dry season, sources of water often disappear, transforming the Serengeti into a virtual equatorial desert. Being able to follow predictable paths through the plains, with regular access to water, was the difference between life and death.

As noted in the 'Legend' in the lower left, the map clearly labels tracks taken from 'English maps'; a 'German Military Plan'; as well as routes that are 'doubtful'. Along the tracks are symbols indicating reliability of water sources: 'much, 'little', 'no' and 'permanent'. At the bottom are labeled 'Tracks given by D.C. Ngong thus', 'These may be relied upon as giving dry weather conditions', doubtless intelligence supplied by a Masai tribesman working with the British. Critically, the numbers that appear along the tracks indicated the mileages between key points, among them British and German military outposts, villages, and Masai camps.

While the East Africa Campaign was fought between European colonial powers and their Askari (indigenous African) soldiers, in reality, the territory of the Serengeti Plain was then, as today, under the practical control of the Masai, a noble nation of nomadic warriors. Cooperation with the Masai was essential to survival. Indeed, a strong relationship with the Masai, given their unparalleled knowledge of the terrain, was essential to success in the region. Accordingly, the map features a 'Glossary of Useful Masai Words' (upper right), including phrases: 'is there water'; 'do you know the road' and 'I want food now'.

Below the Masai glossary, is a manuscript 'X' indicating 'Scraps', which refers to military altercations (in some cases full battles) between the British and German forces. Seven such events are noted, most with dates. Three of these 'Scraps' refer to events early in the war. The first, labeled '23.9.14' (dated only six days after the present map was printed!), refers to a German raid into the Ingito Hills region of British East Africa. The second, marked '3.11.14', in the vicinity of Longido, refers to the Battle of Kilimanjaro, a decisive engagement in which the first British invasion of German East Africa was stopped in its tracks. The third, undated, 'Scrap' shows the location of a skirmish in the Longido vicinity.

The second set of 'Scraps' refers to engagements during the 1916 second British invasion of German East Africa. This second invasion proved operationally successful if strategically disadvantageous. The first altercation is marked '20.01.16', just north of Longido; the next is 'March 1916', at Magasini, just northeast of Mount Meru; the third is 'March 1916', at Garagua; and the final 'Scrap' is at Kahe, also in 'March 1916', located in the far lower right of the map.

At the beginning of World War I, the British Army Headquarters for East Africa in Nairobi set up a special mapping department. As noted, accurate geographical intelligence was essential for regional military operations. The department was linked to the military intelligence HQ, as many of the best geographical sources, especially regarding the German side of the border, were obtained clandestinely. The map room produced numerous maps, but only in very small quantities. Given low production volume, the rough nature of the region, and the fact that they were considered 'top-secret', very few survive. Nonetheless, the quality of the maps were repeatedly extolled in both army dispatches and in authoritative accounts of the East Africa Campaign.

The head of the Nairobi HQ's mapping department was Lieutenant Colonel Richard Meinhertzhagen (1878 - 1967), an intelligence offer and larger-than-life figure, who variously garnered intense admiration, animosity, and controversy. Meinhertzhagen was an intensely talented cartographer, geographer, and artist. In additional to his cartographic work he was considered one of the great Big Game hunters and a world-renowned ornithologist. He was also a congenital liar, a thief, and a murderer who killed a tribal chief in cold blood, and probably murdered his own wife in 1928.

As T.E. Lawrence ('Lawrence of Arabia'), a colleague of Meinhertzhagen, wrote in his memoir, Seven Pillars of Wisdom (1926):

Meinertzhagen knew no half measures. He was logical, an idealist of the deepest, and so possessed by his convictions that he was willing to harness evil to the chariot of good. He was a strategist, a geographer, and a silent laughing masterful man; who took as blithe a pleasure in deceiving his enemy (or his friend) by some unscrupulous jest, as in spattering the brains of a cornered mob of Germans one by one with his African knob-kerri. His instincts were abetted by an immensely powerful body and a savage brain...

Meinhertzhagen was superbly qualified to aid the British effort in the East Africa campaign. From 1902 to 1906 he served in the King's African Rifles (KAR), with whom he extensively explored and mapped what is now the southern part of Kenya, as well as some areas across the German colonial border. When Meinhertzhagen was redeployed, in early 1914, he was placed in charge of the Nairobi map room. While the present map is signed by an unidentified 'C.H.W.' and dated '17.9.14', it was likely made under Meinhertzhagen's close supervision, using geographic data from his sources. The manuscript sketch, on which the present map is predicated, was then duplicated by the cyanotype method, an ideal technique for quickly turning out a small number of copies during an active wartime situation.

Cyanotype is a photo-reprographic technique developed in 1842 by the British astronomer John Herschel (1792 – 1871). Sometimes called a 'sunprint', the technique employs a solution of ferric ammonium citrate and potassium ferricyanide, which painted on white paper or cloth, reacts when exposed to sunlight to dye the object a brilliant blue. Areas blocked from ultraviolet exposure remain undyed and white. Herschel developed the technique to reproduce his astronomical notes, but others quickly realized that any object capable of blocking light could be used to quickly and easily create a cyanotype image. By the late 19th century the process became popular with the designers, military, architects, and engineers (blueprints), who used the cheap an effective technique to quickly and exactly reproduce images in the field. Cyanotyping is limited in that only a single copy can be made at one time, so it was only practical for short-term field work. It is also of note that cyanotypes remain extremely reactive to light and, over time, fade or degrade, making them extremely ephemeral. The process fell out of fashion in most places by the 1920s, but remains in use in some parts of the world, such as India and Nepal, to this day.

This map was made in the Nairobi Map Room, most likely under the direct supervision of Lieutenant Colonel Richard Meinhertzhagen, who headed the operation. It was produced in cyanotype in 1914 for the First British Invasion of German East Africa. No other surviving examples are known.

Good, some wear along original folds and small holes at some fold vertices. Tack marks in corners. Some verso reinforcements with old tape.
Looking for a high-resolution scan of this?