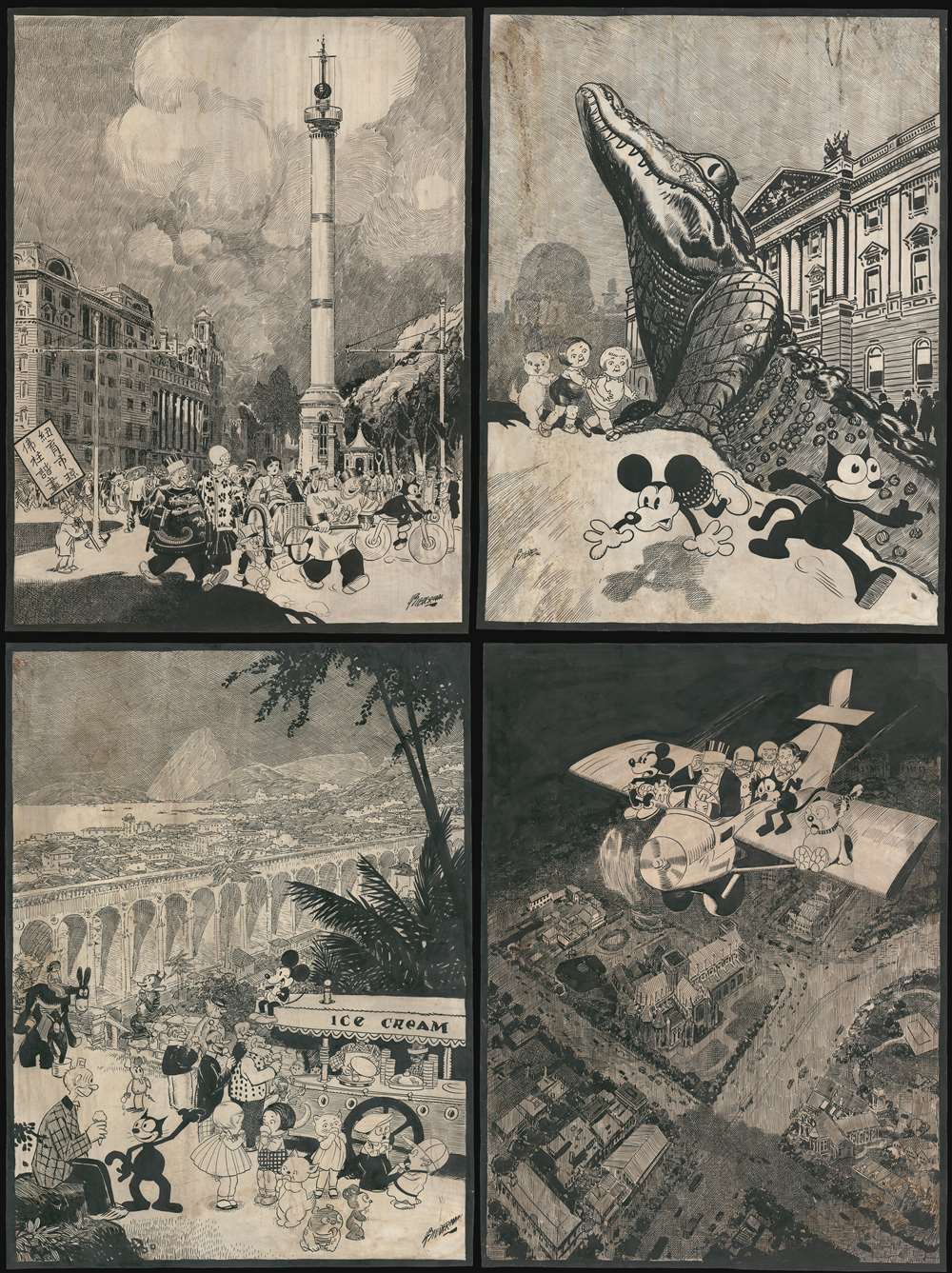 Some of the earliest surviving original illustrations associated with the King Features Mickey Mouse comic series.

A one-of-a-kind set of four 30 x 40 inch original 1930 Disney / King Features manuscript pen and ink drawings of impressive size, by the master cartoonist Louis Biedermann. They are among he earliest surviving original artworks related to the Micky Mouse Comic Strip (1930 - 1995). The drawings feature Mikey Mouse (just 2 years after he was created), Felix the Cat, Bonzo the Dog, Jiggs and Maggie, Dub Dora and others.

The production of these, by King Features, follows the licensing of Mikey Mouse by Joseph Connolly, the president of King Features Syndicate. A July 24, 1929 letter form Connolly to Walt Disney's right hand animator Ub Iwerks, reads,

I think your mouse animation is one of the funniest features I have ever seen in the movies. Please consider producing one in comic strip form for newspapers. If you can find time to do one, I shall be very interested in seeing some specimens.

More focused on animation, the Disney team was slow to respond, but by November, samples of the new strip were approved by the syndicate. King Features had their in-house illustrator, Louis Biedermann, put together new calendar art featuring Mickey - of which these are four of the presumed 12 artworks.

We can date the year that these were done, quite accurately, as 1930. In January of that year, King Features licensed Mickey Mouse. And each of these four scenes includes the newly arrived Mickey … It is clear that Louis has not quite firmed up his take on Mickey; check out those giant ears! … I sometimes sit, for hours, gazing at these, while contemplating Biedermann and the King Features Comic Calendar. It is a reverie that I enjoy. I like to speculate about them. I know, for certain, others existed, as I have collected the scant evidence. What would the missing ones be like? What were the other countries on the World Tour that these four panels of art depict? When I got them, they were on the brink of disintegrating, sort of like the Dead Sea Scrolls. I deacidified the paper before I framed them, hoping that will save them. Will I ever see the others? Or were they destroyed? Surely there are more calendars out there. The missing years; how many were there? Any day, one could appear, as I sit here, waiting for Biedermann.

The calendar itself has never been seen, and may never have been issued.

The art series supposes a tour around the world, visiting major cities, by a medley of King Features comic characters. King Features issued a popular annual calendar highlighting its iconic comic characters, which in 1930, including Walt Disney's rising star mouse, Other known images from the series include Brussells, Mexico City, Buenos Aires, and Capetown. Birnkrant mentions that in the auction where he acquired his four, a fifth was up for auction available, but he did not acquire it.

These artworks were drawn by Louis Biederman for inclusion in the 1930 King Features Calendar. There is no record that the calendar was ever published. Presumably there were 12 original drawings - one for each month. Four are in the collection of Mel Birnkrant, four are offered here, the whereabouts of the remainder are unknown.

Louis Biedermann (November 11, 1874 - July 16, 1957) was an American commercial illustrator, painter, futurist, and comic artist active in the middle part of the 20th century. Biedermann was born in New York and grew up in Brooklyn. He is was described as a large, rugged, and solid appearing man with a ruddy face and kindly eyes. As a boy, Biedermann earned money by delivering beer to thirsty construction works, a now defunct child profession known as 'rushing the can.' At 12, he took a position with Frank Leslie's Weekly, beginning his lifelong newspaper career. Biedermann did not study art formally, but nonetheless developed a unique personal style, characterized by the use of bold compelling lines, combining crosshatching and hachuring. From about 1890, Biedermann worked for the New York World, where he became known for the speed and skill of his draftsmanship. In 1900, Biedermann produced a remarkable futuristic view of New York City as it might appear in 1999. The view of lower Manhattan is filled with skyscrapers and bridges, but aside from the airships, is not far off from truth. The work garnered him great respect, with the Illinois Daily Free Press, writing,

Biedermann is panoramic. He is panoramic in his thinking. His mental and well as his optical perspective presents a complete and extended view of all directions. The breadth of his understanding is more panoramic, perhaps, than his art.

From 1922 Louis Biedermann worked as a staff assistant at King Features, filling in when other cartoonists went on vacation, inking different cartoonists work. The position speaks volumes of Biedermann's virtuosity and the ability to replicate the work of any other comic in the King Features Syndicate. He executed a series of 12 dramatic drawings of Disney characters traveling around the world in 1930 for a King Features Calendar, but it is unclear if it was ever issued. Biedermann retired from King Features in 1940 and relocated to his summer home on Shelter Island, New York, where he lived out his retirement driving what one newspaper man called 'a big powerful automobile.' He died in Greenport, Long Island in 1957. Learn More...

King Features Syndicate (November 16, 1915 - Present) is a print syndication company founded by William Randolph Hearst to distribute comic strips, newspaper columns, editorial cartoons, puzzles, and games. Initially the syndicate produced and sold work by its own in-house artists, but later, began licensing and distributing the work of others. Today, it remains active as one of the largest distributers of comic strips and related material, with more than 150 artists presented to over 15000 newspapers worldwide. Learn More...