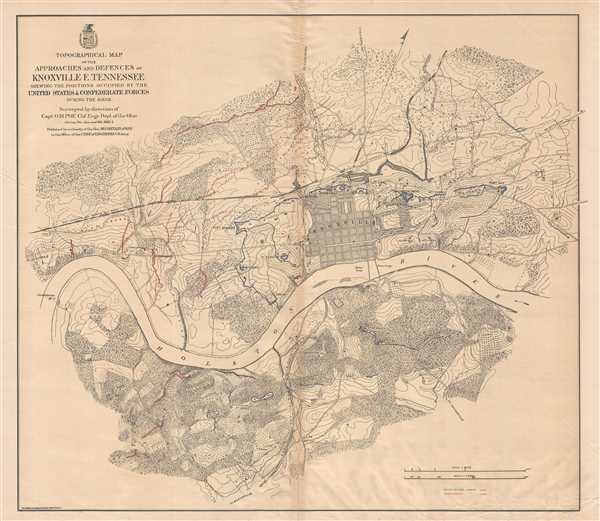 Illustrates the Union and Confederate lines during the Siege of Knoxville.
$350.00

This is an 1864 Orlando M. Poe map of Union and Confederate positions surrounding Knoxville, Tennessee during the Siege of Knoxville. Centered on Knoxville and the Holston River, the map depicts the city of Knoxville and its environs, with particular focus placed on Union and Confederate entrenchments. Individual forts and batteries are labeled within Union lines, while Confederate positions are illustrated in a much less concrete manner. Like many other major cities in southern states, Knoxville was a rail hub that provided a crucial connection between the eastern and western portions of the Confederacy. The East Tennessee and Georgia Railroad, the Tennessee and Kentucky Railroad, the East Tennessee and Virginia Railroad, and the unfinished Knoxville and Charleston Railroad all were routed through Knoxville, making the city an appealing objective for the Union.

The Knoxville Campaign was a series of battles and maneuvers during the American Civil War undertaken in an effort to secure the city of Knoxville, Tennessee. Union Major General Ambrose Burnside occupied Knoxville following Confederate Major General Simon B. Buckner's ordered evacuation of the city so that he and his troops could reinforce General Braxton Bragg's Army of Tennessee during the Battle of Chickamauga. Buckner only left behind one brigade in the Cumberland Gap and another east of Knoxville. Burnside won two victories over these forces, one at Cumberland Gap and another at Blue Springs, leading to General James Longstreet being ordered to march against Burnside. Longstreet, however, did not agree with the decision to divide the Confederate army between Knoxville and Chattanooga, but followed orders. His force was beset by setbacks in their effort to reach Knoxville, leading to extreme delays in his effort to pursue Burnside.

Three battles took place during what has become known as Longstreet's Knoxville Campaign. The first, the Battle of Campbell's Station, took place on November 16th around a key crossroads outside of Knoxville. Burnside's Union force arrived first and deployed in a defensive posture. In doing so, Burnside managed to secure the crossroads and withstand Longstreet's numerous attacks, allowing him and his army to reach Knoxville and regain their defensive earthworks, instead of being forced to fight a pitched battle in the open. This series of events led to the Siege of Knoxville.

Longstreet originally planned to attack the city on November 20, but instead opted to delay the attack and wait for reinforcements. According to Colonel Edward Porter Alexander, Longstreet's artillery chief, 'every day of delay added to the strength of the enemy's breastworks.' After several days of reconnaissance, Longstreet decided that Fort Sanders (labeled here to the left of Knoxville) was the only vulnerable point in Burnside's formidable defensive line surrounding the city. Longstreet ordered the attack to take place on November 29, but the Union defenses were much too strong to be overrun. The fort's outer ditch, which measured twelve feet wide and four to ten feet deep with vertical sides, halted the Confederate attack. Confederate forces did enter this ditch, though they lacked the obligatory scaling ladders to climb the nearly-vertical walls. This, combined with withering defensive fire from the Union fort, led to a twenty-minute assault that resulted in 813 Confederate casualties against only 13 Union casualties.

Faced with the reality that Union General William T. Sherman, who had just helped break the siege of Chattanooga, was on his way with 25,000 troops to break the siege of Knoxville, Longstreet opted to withdraw. A small Union force pursued him, which led to a small battle at Bean's Station, Tennessee. By holding Knoxville (and Chattanooga), most of East Tennessee remained under Union control for the rest of the war.

This map was created from surveys completed under the direction of Orlando M. Poe and published in 1864.

Orlando Metcalfe Poe (March 7, 1832 - October 2, 1895) was an officer and engineer in the United States Army and an American Civil War veteran. Poe was born in Navarre, Ohio, and attended the United States Military Academy, from which he graduated sixth in his class in 1856. After graduating, he served as an assistant topographical engineer on the survey of the northern Great Lakes. At the beginning of the American Civil War, Poe helped organize the volunteers from Ohio and later was named to Major General George B. McClellan's staff in western Virginia. Poe also assisted in organizing the defense of Washington, D.C. He was promoted to colonel of volunteers in September 1861 and put in command of the 2nd Michigan Volunteer Infantry Regiment. He commanded this regiment from Yorktown through the Battle of Seven Pines during the Peninsula Campaign. Because of his success as a commander, Poe was given field command of as brigade before the Northern Virginia Campaign of 1862, which he commanded at the Second Battle of Bull Run and the Battle of Chantilly. His brigade was also present, though not active, at the Battle of Fredericksburg. Poe was appointed brigadier general of volunteers, though Comgress rejected his appointment and he reverted to his old rank of lieutenant in the regular army. Even so, he was soon promoted to captain and transferred to the Western Theater, where he served as chief engineer of the XXIII Corps. In this capacity, Poe played a key role in the defense of Knoxville, Tennessee. Due to his contributions at Knoxville, Major General William T. Sherman selected Poe as his chief engineer in 1864. While serving with Sherman, Poe oversaw the burning of Atlanta, personally directing the orderly disassembly and destruction of rail depots, roundhouses, arsenals, and storage areas that could have provided any military aid to the enemy. He continued to serve as chief engineer during Sherman's March to the Sea, an operation in which he proved to be 'indispensable' according to Sherman, and continued with Sherman through the Carolinas Campaign until the end of the war. After the war, Poe became the Lighthouse Board's chief engineer. Poe was promoted to Chief Engineer of the Upper Great Lakes 11th Lighthouse District in 1870, during which time he designed eight 'Poe style lighthouses' and oversaw the construction of several. He is best known for the Spectacle Reef Light on Lake Huron, which has been called the 'best specimen of monolithic stone masonry in the United States' and 'one of the greatest engineering feats on the Great Lakes.' Poe returned to General Sherman's staff in 1873, serving as his aide-de-camp until 1883, during Sherman's tenure as the commanding general of the U.S. Army. Poe left Sherman's staff in 1883 when he was named Superintending Engineer of Improvement of Rivers and Harbors on Lakes Superior and Huron, during which time he helped develop the St. Marys Falls Canal. To this day, many consider the crowning achievement of his career the design and implementation of the first Poe Lock in the American Too Locks in Sault Ste. Marie. This system of locks was instrumental in making it possible for the shipping industry to reach into the upper Great Lakes, which played a pivotal role in the creation of the basic steel industry in the United States. Poe's original lock was replaced in the early 1960s with a much larger, more modern one, but the new lock was renamed the Poe Lock and serves the largest Great Lakes freighters to this day.


Graphic Company (1872 - 1890), or The Graphic Company, was a New York City based printing house based in New York City in the latter half of the 19th century. The company was founded by the brothers James H. Goodsell and C. M. Goodsell. The Goodsell Brothers were born in Michigan and for a time ran a printing business in Chicago which they lost during the 1871 Great Chicago Fire. They moved to New York in 1872, drawing investors and founding The Graphic Company with $500,000 USD in investment capital, much of it from Canada where the company was traded. Among their investors were the prominent Republicans Alexander Robey 'Boss' Shepherd and General Benjamin Franklin Butler. It was originally created as a newspaper, The Daily Graphic, but quickly expanded to other forms of printing. In 1873, they concocted a publicity stunt to build a giant branded balloon to send aeronauts John Wise and Washington H. Donaldson across the Atlantic in just 60 hours – an attempt which ended in disaster in a Connecticut farm field, just 120 miles from its starting point. By 1874, The Graphic Company advertised as general lithographers, engravers, and power press printers, with specializations in commercial lithography (stock certificates, checks, notes, etc), presentation cards, chromolithography, and photo-lithography. Within a year they had become a large and successful printing house, largely due large government printing contracts that may have been dubiously obtained, possibly through investors Sherman and Butler. In 1878 they introduced an additional periodical, The Weekly Graphic. The Goodsells sold their shares in The Graphic Company by at least 1886. By 1888 the company had changed its name to the American Graphic Company. In 1889 it advertised as the Graphic Publishing Company. For most of its time in operation the company was located at 39-41 Park Place, New York. The firm was dissolved by court order in March of 1890. The Goodsell Brothers were also, from 1872, publishers of the Financier, a successful financial journal based at 156 and 158 Broadway, and the Insurance Spectator.