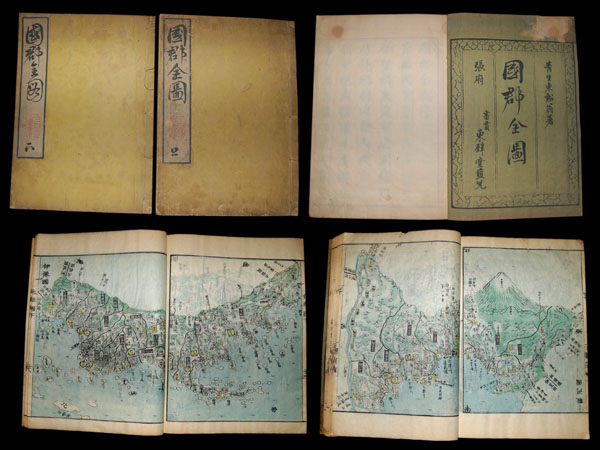 Rare and important Ino Tadataka Atlas of the Tokugawa Era.
$3,500.00

Entitled Kokugun Zenzu and printed c. 1839 (Tenpo 10), this is an early Japanese atlas of exceptional rarity, beauty and importance. Compiled by Motonobu Aoo and Toshiro Eirakayu based upon the works of Japan's 18th century master cartographer Ino Tadataka, this set of two volumes contains more than 70 regional maps of Japan. Each map offers spectacular beauty and detail exhibits traditional Japanese cartography at its finest. Such atlases were compiled by order of the Shogun Tokugawa and given as gifts to his favored warlords. Many of the feudal fortresses in Japan were subsequently destroyed by war and fire, their archives were lost, and thus few such examples survive. Further Ino Tadataka material is additionally rare as most of his surviving maps were assembled in the late 1800s by an imperial functionary and avid Ino collector. They were subsequently stored in the Royal Palace archives which were themselves, tragically, destroyed by fire in 1912. There are two different versions of this atlas. Though both have the same maps, one is a 'deluxe' edition, is larger and printed on heavy paper. The other is printed on very thin paper and is physically thinner. This is the smaller edition.

University of British Columbia, Japanese Map of the Tokugawa Era, G2357.A6 1837 v.1-2 .
Looking for a high-resolution scan of this?