1852 Meyer Map of the World showing the Distribution of Plants 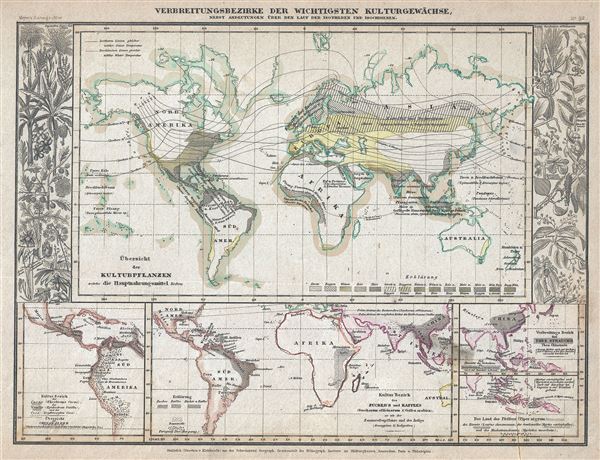 1852 Meyer Map of the World showing the Distribution of Plants

This is a fine example of the 1852 map or chart showing the distribution of the most important cultivated plants around the world by Joseph Meyer. It depicts the distribution and limits of cultivation of the principal plants useful to mankind. Three insets are included along the lower border, detailing the regions of distributions of vanilla, tea, coffee, sugar, etc. The left and right border of the map proper is beautifully decorated with illustrations of various crops.

This map was issued as plate no. 92 in Meyer's Zeitung Atlas. Although all the maps in this atlas are not individually dated, the title page and maps were often updated while the imprint with the date was not, causing confusion to the exact date for some of the maps. Moreover some maps in the atlas were taped in at a later date as an update to the atlas. We have dated the maps in this collection to the best of our ability.

Very good. Minor spotting at places. Blank on verso. Minor crease in lower right quadrant.
Looking for a high-resolution scan of this?