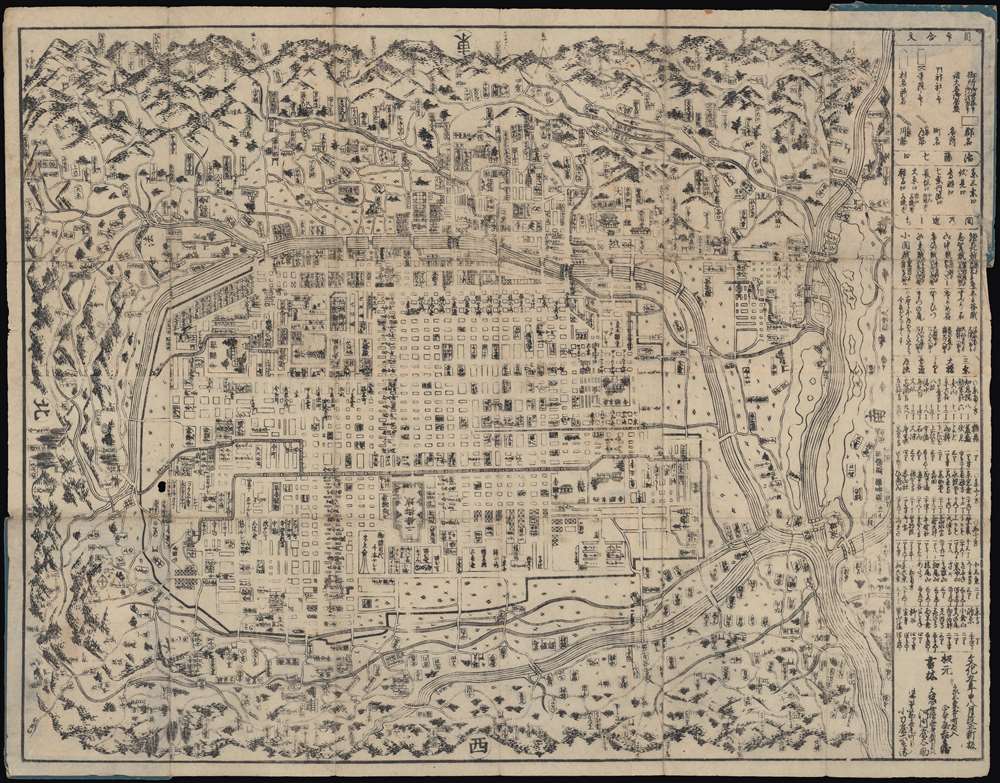 This is a fascinating 1812 (Bunka 9) kyōgōzuri (校合摺 first printing) folding map of Kyoto, designed to be portable for visitors to the imperial city. Most often, these would have been religious pilgrims visiting one of the city's many shrines and temples. In addition, travel purely for leisure had become widespread in Japan by the time this map was produced.

This map is oriented towards the east, with north at left and south at right. Although untitled, it is generally cataloged as Kyōto shishō-zu (京都指掌圖), meaning roughly 'Hand Map of Kyoto,' and its foldability attests to its intended use. The right-hand bar includes a legend, a list of the seven gates of Kyoto, and the distances between various famous sites.

Kyoto had been the home of Japan's emperors since 794 CE and as a result retained a certain splendor in later centuries, even as the political power and wealth of the imperial family were overshadowed by military figures (daimyo and shogun). Kyoto was largely destroyed during Japan's Sengoku warring states period in the 15th century, but, like much of the country, rebounded with the political stability of national unification. Although the shoguns in Edo held real power, the emperors in Kyoto made efforts to claim a degree of authority, usually with very limited success.

Nevertheless, Kyoto's economy thrived during the Edo period, and it developed a bustling service economy catering to travelers and pilgrims from across Japan. Being the western terminus of the Tōkaidō Road also aided in the development of a commercial economy. But this period did see its share of troubles as well, most notably in 1788 (the year the first edition of this map was published), when a massive fire caused extensive damage to the city, burning down the Imperial Palace (cluster of buildings just south/right of the Shōkoku-ji 相國寺) and the Nijō Castle (二条御城, featured prominently at center, towards bottom).

Kyoto is home to some 2,000 shrines and temples, as well as a number of palaces, gardens, forests, and other culturally significant sites. Even restaurants were well-established by 1812, some dating back to the 15th century. Tourists and pilgrims utilizing this map would have been eager to visit the same sites as tourists today, including the Temple of the Golden Pavilion (Kinkaku-ji 金閣寺, towards bottom-left), the Yasaka Shrine (here called Gion Shrine 祇園社, towards top-center), the Fushimi Inari-taisha (here as 稲荷社, towards top-right), and the Kiyomizu-dera (清水寺, top-center).

This map was published in 1812 (Bunka 9) in the eighth month of the lunisolar calendar. It is the second edition of a map (titled 京圖名所鑑) first published in 1778 (An'ei 7), which was then subsequently revised and reprinted in 1835, 1840, 1852, 1862, and 1863. This is an atypical edition; most of the 1812 editions of this map were printed with color by Takehara Yoshibē (竹原好兵衛), yet this was printed with black ink only by Ishida Jihē (石田治兵衛) in Kyoto and by Kawachiya Tasuke (河内屋太助) and Kogatanaya Rokubē (小刀屋六兵衛) in Osaka. It is likely that this was a kyōgōzuri 校合摺 print, a first or proof print from the keyblock (omohan 主版) before colors were added. Further credence is given to this interpretation as several items in the legend are not indicated by any symbol, but in the colorized version are represented by colored boxes, squares, and triangles. This edition is held by the National Museum of Japanese History and the University of California Berkeley.

﻿Ishida Jihē (石田治兵衛; fl. c. 1668 - 1900) was a Kyoto-based Japanese publishing house active throughout the Tokugawa period and into the Meiji period. The publishing house was likely named after its founder and carried on the name after his death. Learn More...


Kawachiya Tasuke (河内屋太助; fl. c. 1735 - 1868) was a publisher based in Osaka that ocassionally published maps of Osaka and other sites in the Kansai region. Learn More...

Very good. Small area of loss in lower left quadrant. Some wear at margins and along fold lines.