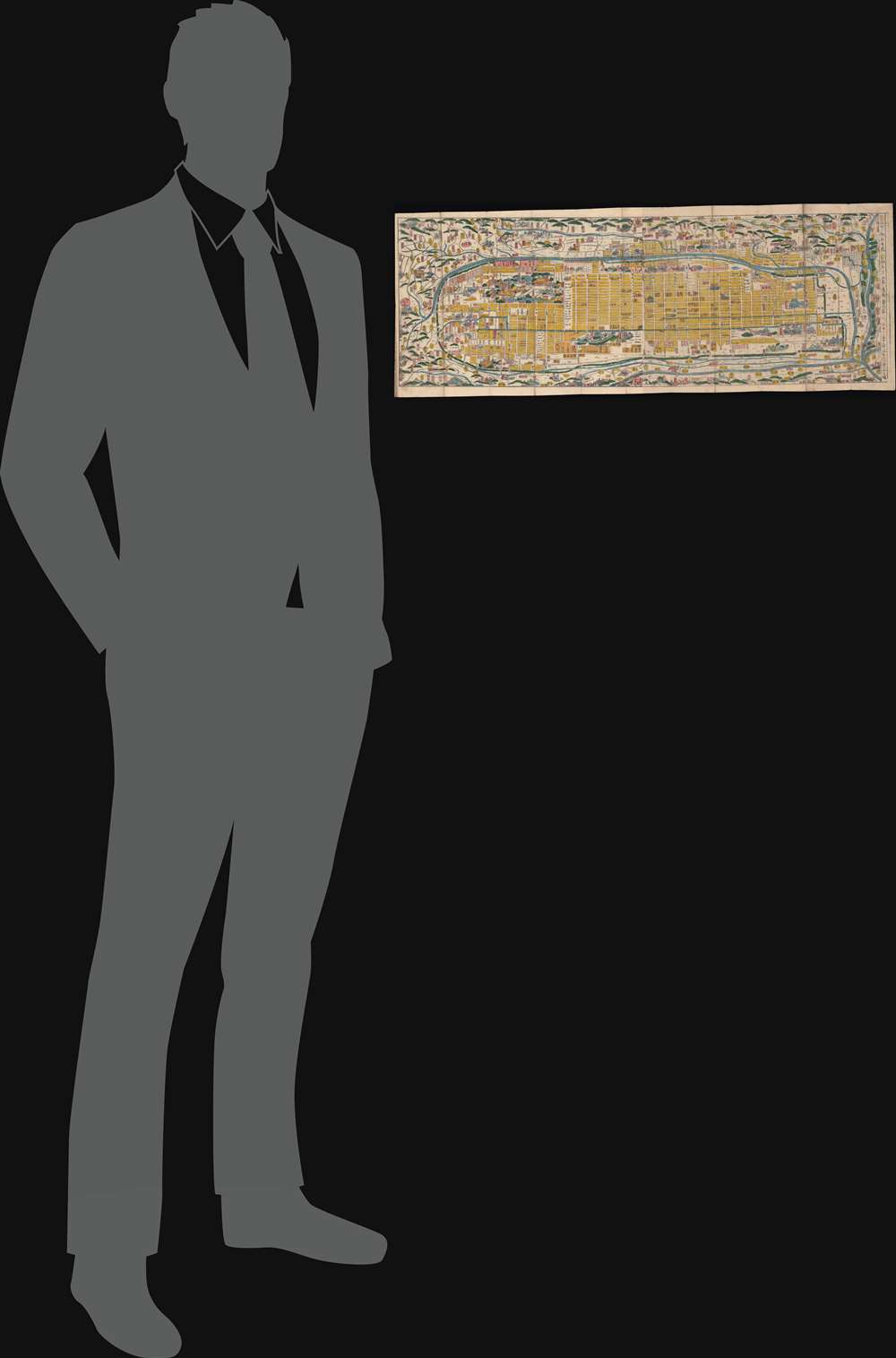 A guide to the beauty and splendor of the imperial city.
$750.00

This is a very rare 1863 edition of a folding map for tourists and pilgrims to Kyoto, Japan, made by the publishing house Takehara Yoshibē. It is the product of a decades-long evolution of tourist maps for Kyoto, resulting in a delicate balance between aesthetics, comprehensiveness, and utility.

A Comprehensive Guide to Kyoto

This map is oriented towards the east, with north at left and south at right. Takehara and other publishers based in Kyoto made a range of similar maps during the mid-late Edo period (1600 – 1868), but this map is exceptional for its beautiful coloration, the result of a complex multistage woodblock printing process. It presents an interesting combination of perspectives, mixing a standard overhead city plan with birds eye views of certain important buildings, either shrines and temples or palaces and castles belonging to the imperial household.

The right-hand margin contains a legend, explaining that the red rectangles around text refer to Shinto shrines and Buddhist Temples, yellow circles are for villages and roads to villages beyond the scope of this map, blue lines are for waterways, and triangles are for temples and shrines packed into small alleyways.

The verso (back) includes a comprehensive street guide to the imperial city (京名新案内), along with a recommended itinerary and an explanation of the system of streets and alleyways (橫町小路) that help give the city its distinctive character.

Kyoto had been the home of Japan's emperors since 794 CE and as a result retained a certain splendor in later centuries, even as the political power and wealth of the imperial family were overshadowed by military figures (daimyo and shogun). Kyoto had been almost entirely destroyed during Japan's Sengoku warring states period in the 15th century, but, like much of the country, rebounded with the political stability provided by national unification in the 17th century. Although the shoguns in Edo held real power, the emperors in Kyoto made efforts to claim a degree of authority, usually with very limited success.

Nevertheless, Kyoto's economy thrived during the Edo period and it developed a bustling service economy catering to travelers and pilgrims coming from throughout Japan. Being the western terminus of the Tokaido also aided in the development of the commercial economy. But this period did see its share of troubles as well, most notably in 1788, when a massive fire caused extensive damage to the city, burning down the Imperial Palace (cluster of buildings at center-left) and the Nijō Castle (二條御城, featured prominently at center, towards bottom).

By the time this map was published, Japan was undergoing rapid and disruptive changes in the wake of being 'forced open' by American warships a decade earlier. Discontent with the response to the foreign threat by the Tokugawa Shogunate led to unrest by samurai looking to restore the emperor to political prominence and displace the shogunate. In 1863, Emperor Kōmei (孝明天皇) issued a symbolic edict to expel the 'barbarians,' which increased anti-foreign and anti-Tokugawa sentiment. The following year, a group of shishi rebels attacked the Hamaguri Gate (蛤御門) on the west side of the imperial palace in an attempt to reach the emperor and restore him to what they considered his rightful place. The Tokugawa crushed the effort and launched a retaliatory military campaign against Chōshū domain in southern Japan, a hotbed of unrest. Unfortunately, during the failed uprising the rebels set fires that burned down thousands of structures in Kyoto (there is debate as to whether the fires were planned and what their purpose might have been). The failed uprising was an important engagement in the rebellion against the Tokugawa that eventually succeeded in 'restoring' the emperor in 1868, though the imperial capital was relocated to Edo (Tokyo) in the process.

Kyoto is home to some 2,000 shrines and temples, as well as palaces, gardens, forests, and other culturally significant sites. Several restaurants in the city were already very well-established by 1863, dating back to the 15th century. Tourists and pilgrims utilizing this map would be eager to visit many of the same sites as tourists today, including the Temple of the Golden Pavilion (Kinkaku-ji 金閣寺, towards bottom-left), the Yasaka Shrine (here called Gion Shrine 祇園, near top-center), and the Kiyomizu-dera (清水, top-center).

This map was published in 1863 (文久三癸亥年) by the publishing house Takehara Yoshibē (竹原好兵衞), which specialized in maps of the imperial city for travelers. It is a revised edition of an earlier map, published in 1832 (天保三壬辰年), itself updated from an 1811 (文化八辛未年) original, all made by Takehara. This edition is only known to be held by the National Museum of Japanese History, Kyoto University, and Bukkyo University, and it is scarce to the market.

Takehara Yoshibē (竹原好兵衞; c. 1774 - 1868) was a Japanese publishing house active in the late Tokugawa period that primarily produced maps relating to Kyoto. The publishing house was likely named after its founder and carried on the name after his death. Learn More...