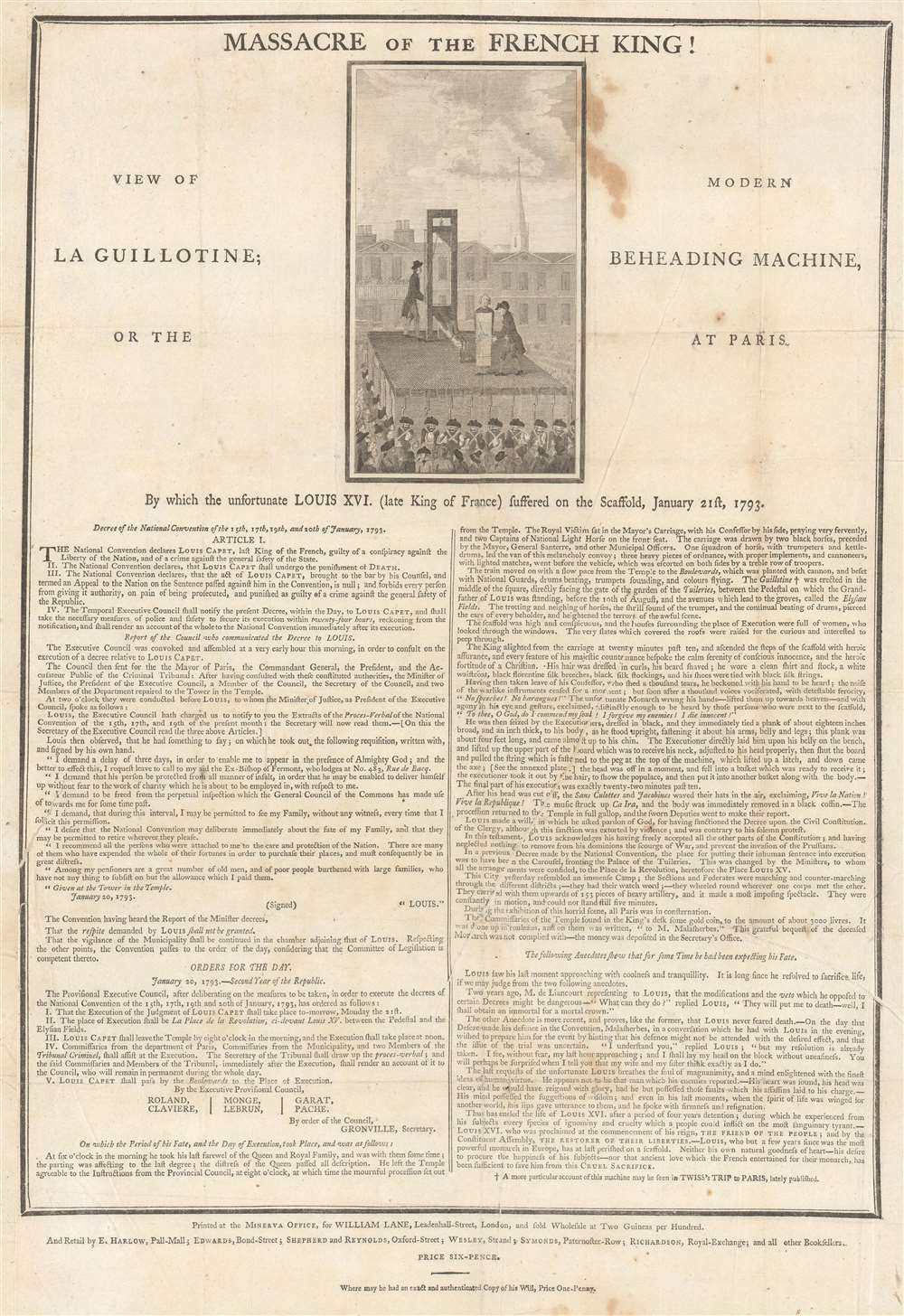 This is a 1793 William Lane broadside decrying the execution the French King Louis XVI while at the same time extolling the terrible industrial modernism of the guillotine itself. The author is justly horrified by the violence of the 'Reign of Terror' but at the same time macabrely fascinated with modern industrial efficiency of the 'killing machine.'

While the guillotine became a symbol of the French Revolution, it had actually been in use for centuries as an efficient, humane, killing devise. The guillotine was invented with the specific intention of making capital punishment more humane in accordance with Enlightenment ideals, as previous methods of beheading - the headman's axe - were shown to be excessively painful and prone human error. In France it was the physician Joseph-Ignace Guillotin who, speaking before the National Assembly, proposed that capital punishment should take the form of decapitation 'by means of a simple mechanism.' This spoke to French Revolutionary Ideals, serving as a great equalizer, equally efficient at killing king or serf. It also marked a stark differentiation between the pre-revolutionary Ancien Régime executions, which often involved torture, and 'Enlightened' Revolutionary France. Nonetheless, during the Reign of Terror some 17,000 people were guillotined, among them the former king, Louis XVI, and his wife Queen Marie Antoinette. Towards the end of the Reign of Terror, even Revolutionaries like Georges Danton, Saint-Just, and Maximilian Robespierre found themselves under the blade.

The broadside features two columns of text, which reproduces the decree of the French National Convention declaring that Louis XVI would be executed, an account of his execution, and a short text portraying the King as accepting of his fate and willing to sacrifice himself. A woodcut of a French execution, although not that of Louis XVI, is included in the top third of the broadside. Per Kevin Sharpe and Steven N. Zwicker in their book Refiguring Revolutions: Aesthetics and Politics from the English Revolution to the Romantic Revolution, Lane produced this broadside and then sold it at a discounted price so that

this horrid and unjust sacrifice…should be known to all classes of people, and in particular to the honest and industrious Artisan and manufacturer, who might be deluded by the false and specious pretenses of artful and designing persons.

Reactions to the French Revolution in Great Britain

The French Revolution was, of course, very concerning to the British monarchy and government as a whole. Prime Minister William Pitt put in motion numerous measures that restrained personal liberty and political protest, leading to the era's nickname, 'Reign of Terror'. Measures restricting political meetings and banning treasonable publications were put in place and spies and other informers were used extensively. Also, the number of loyalist groups increased dramatically, all pledging allegiance to the Crown.

This broadside was published by William Lane and printed by his own Minerva Press in 1793. Several different editions of this broadside were issued, with the major differences involving the text. We have identified only one other example of this edition, though others may exist, at the Graphic Arts Collection at Firestone Library of Princeton University.

William Lane (1746 - 1814) was a British bookseller and publisher active during the late 18th century. Lan began his Circulating Library in 1774, to which people paid subscriptions. He then established the Minerva Press around 1790, which is remembered for creating a substantial market in sentimental and Gothic fiction. Two partners, Anthony King Newman and John Darling, joined the press around 1799. After Lane retired in 1804, Newman took over direction of Minerva Press, and dropped that name in favor of an 'A. K. Newman and Co.' imprint during the 1820s. Learn More...

Good. Some wear on original fold lines. Slight staining at top near image, and bottom margin. Left margin extended.
Looking for a high-resolution scan of this?