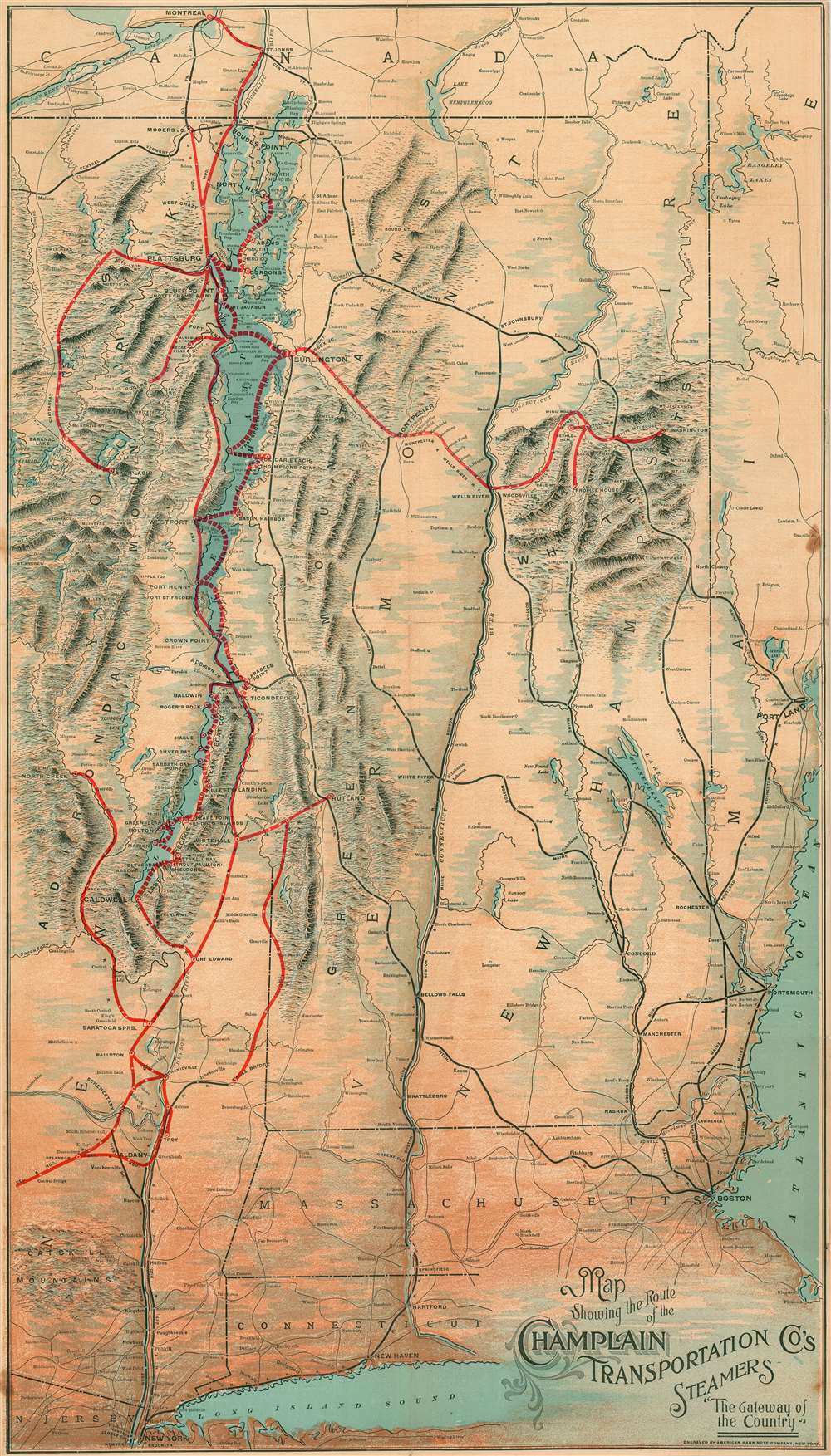 A stunning 1898 chromolithograph map illustrating the routes of the Champlain Transportation Company. The map covers the briskly travelled Hudson Valley / Lake Champlain corridor between New York City and Montreal, extending eastward to the Atlantic to include Portland, Portsmouth, and Boston. While the focus of the map are the ferry routes through Lake George and Lake Champlain, the map also illustrates railroad lines operating by the Champlain Transportation Company to various points in the Adirondacks, Green Mountains and White Mountains. Competing but connecting railroad lines appear in black. The mountainous regions are highlighted to suggestive that these destinations are cool summer resorts.

The Lake Champlain Transportation Company is the oldest steamboat company in the United States. The founding of the company followed the 1823 opening of the 63 mile canal connecting Lake Champlain to the Hudson River, opening the region to easy access from New York City and all points south. Founded by William A. Griswald, the company received its charter on October 26, 1826. The first Lake Champlain steamer, the Franklin, launched shortly thereafter. Eventually it grew to operate multiple steamers, also operating on Lake George. From 1895 to 1901, when this map was made, it was managed by James Roosevelt, father of Franklin Delano.

The OCLC suggests that this map may have been issued form 1892 through 1898. There may be as many as three surviving examples cited in institutional collections, but it is unclear if any of these examples are truly relate dot the present map, as the cataloging is sloppy at best and none are digitized. There is no identifiable market history. Very rare.

American Bank Note Company (1795 - present), known today simply as ABCorp, is an American corporation that traces its origins to the 1795 firm Murray, Draper, Fairman and Company, founded by Robert Scot, the first official engraver of the U.S. Mint. Initially the firm produced paper currency for the nation's thousands of state-chartered banks, superior quality stock and bond certificates, postage stamps (form 1879 - 1894), and other engraved and printed items, including maps. After the Panic of 1857, seven of the United States' most prominent securities printers merged, formally taking the name American Bank Note Company on April 29, 1858. Less than two years later, the remaining independent bank note printers merged to form the competing National Bank Note Company. When the US Treasury Department decided to circulate the first national paper currency at the outbreak of the Civil War, the American and National Bank Note Companies jointly received the contract, and, by the end of the war, had printed 7.25 million 'greenbacks'. Ironically, American and National were also producing paper money for the Confederacy. Following this first contract to print paper currency, American sought other contracts abroad, and ultimately supplied security paper and bank notes to 115 countries. In 1877, Congress passed a law establishing the U.S. Bureau of Engraving and Printing as sole producer of U.S. currency. This forced a second shake up in the security printing industry, and in 1879, American formally absorbed both the National Bank Note and Continental Bank Note Companies. Continental at the time held the contract to print U.S. postage stamps, which continued under the American aegis. American completed the final contract for the private printing of postage stamps in 1894, just after printing the popular Columbian Exposition stamps. Subsequent postage stamps were printed by the federally administered U.S. Bureau of Engraving and Printing. Persevering, in 1891 the American Bank Note Company began printing a new currency for a longtime client: the American Express 'Travelers Cheque'. American printed 9,120 USD worth of Travelers Cheques that first year. Today ABCorp provides secure payment, retail and ID cards, vital record and transaction documents, systems and services to governments and financial institutions, and is one of the largest producers of plastic transaction cards in the world. Learn More...