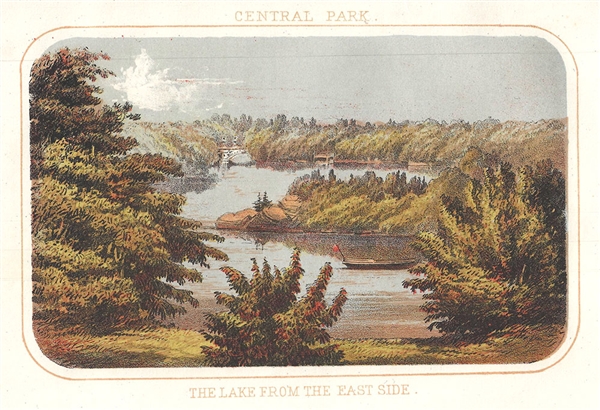 View of Central Park's Lake with the Bow Bridge in the background.
$100.00

This is a beautiful 1868 view of the Lake in Central Park as seen from the east, by Shannon and Rogers. The view features a boat in the water with the Bow Bridge visible in the distance. The Lake, Central Park’s largest naturalistic water body, was created from a former swamp. Vaux and Olmstead envision this 20 acre Lake to be used for boating in the summer and ice-skating in the winter.

Vaux and Olmstead were awarded the task of designing Central Park in 1853 by the City Common Council. Olmstead's vision drove the overall design while Vaux concentrated his attentions on bridges, buildings, and other structures within the park. The creation of Central Park, which was to consist of some 800 acres of public forest, pathways, promenades, lakes, bridges, and meadows, was a seminal moment in civic urban design. The park itself was designed as a whole with every tree, pond, and bench meticulously planned. Olmstead wrote: 'Every foot of the parks surface, every tree and bush, as well as every arch, roadway, and walk and been placed where it is for a purpose.'

Today, because of Vaux and Olmstead's efforts, New York Yorkers, ourselves included, have the privilege of enjoying what is, perhaps, the finest example of a planned urban public recreation area in the world.

Prepared for inclusion in the 1868 edition of Joseph Shannon's Manual of The Corporation of the City of New York.