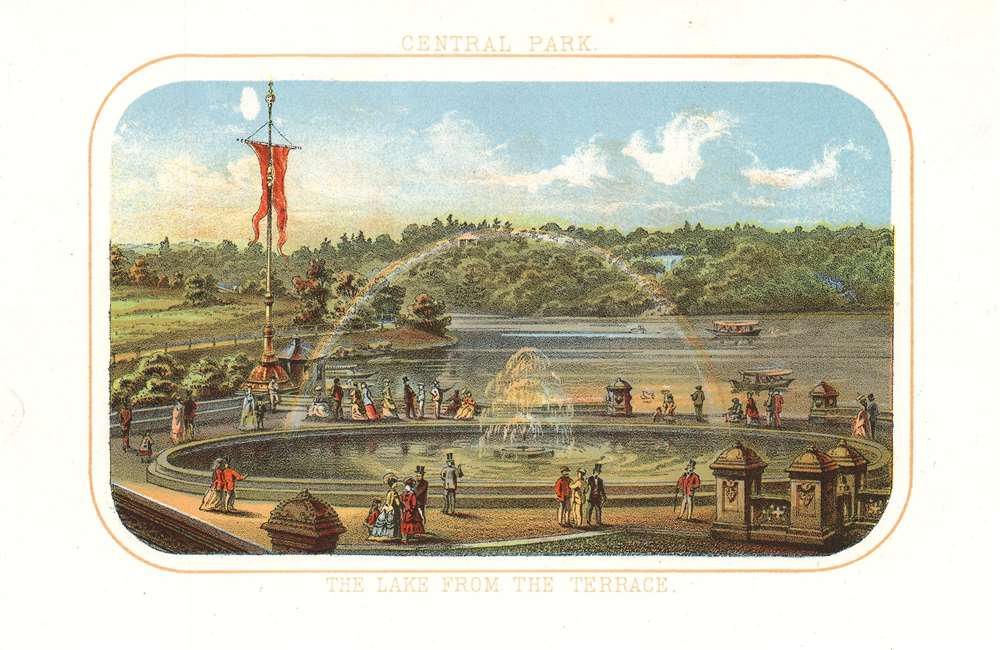 This is a charming 1868 view of the Lake in Central Park, by Shannon and Rogers. This view of the Lake is seen from the Bethesda Terrace, located roughly at 72nd street in the heart of New York City’s Central Park. This view beautifully depicts the Bethesda Fountain in the foreground with visitors strolling nearby. A colorful rainbow can be seen over the fountain. In the background, we see the Lake with a couple of boats in the water. It is important to realize that this part of the park was merely planned, not completed, when this view was made. The central sculpture, ‘Angel of the Water’ by Emma Stebbins, in not included in this view and would only be completed in 1873. Vaux and Olmstead envisioned the terrace as a meeting place in the heart of the park. Today it is one of the most picturesque parts of the park and a popular hangout for artists and musicians.

Vaux and Olmstead were awarded the task of designing Central Park in 1853 by the City Common Council. Olmstead's vision drove the overall design while Vaux concentrated his attentions on bridges, buildings, and other structures within the park. The creation of Central Park, which was to consist of some 800 acres of public forest, pathways, promenades, lakes, bridges, and meadows, was a seminal moment in civic urban design. The park itself was designed as a whole with every tree, pond, and bench meticulously planned. Olmstead wrote: 'Every foot of the parks surface, every tree and bush, as well as every arch, roadway, and walk and been placed where it is for a purpose.'

Today, because of Vaux and Olmstead's efforts, New York Yorkers, ourselves included, have the privilege of enjoying what is, perhaps, the finest example of a planned urban public recreation area in the world.

This image was prepared for inclusion in the 1868 edition of Joseph Shannon's Manual of The Corporation of the City of New York. The Manual is well represented in institutional collections; this view is listed separately only in the Clements Library of the University of Michigan.