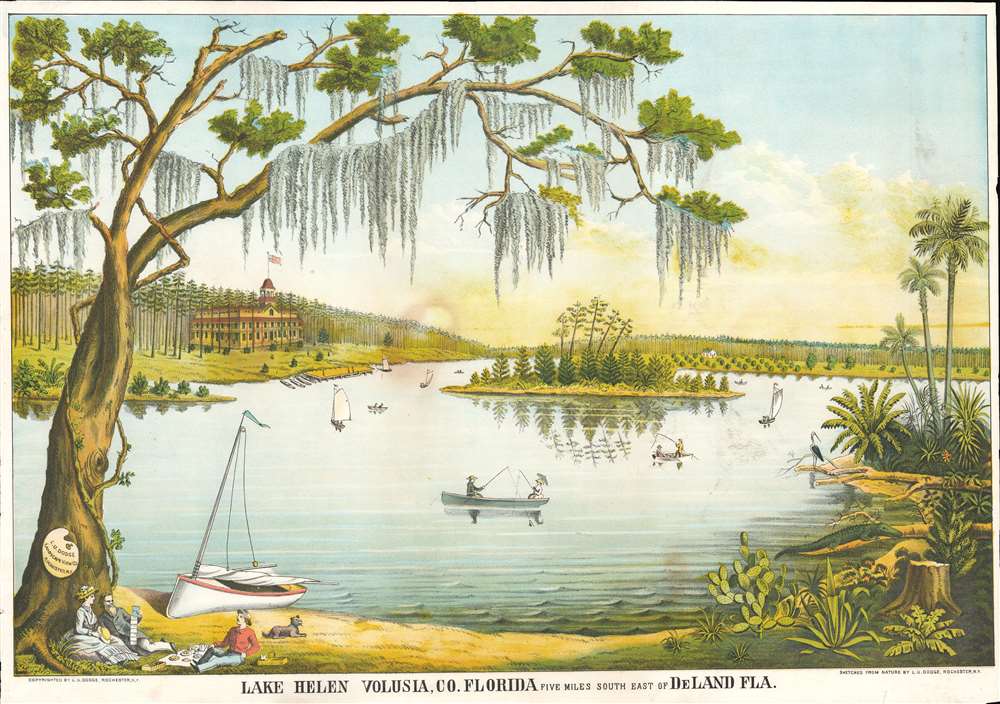 One of the earliest illustrations of Florida resort life.

This is a c. 1884 Loudon Underhill Dodge chromolithograph view of Lake Helen, Florida - perhaps the first illustration of resort life near Orlando. The view illustrates the idyllic lake set within Florida's rich wilderness. The impressively grand Harlan Hotel sits majestically on lake's bank. Boats ply the waters, and a couple happily fishes in the foreground. On the lower left, a group have beached their sailboat and are enjoying a willow-shaded picnic. Their dog lounges nearby and appears to be keeping an eye on the alligator sunning itself to the right. A stork stands on a fallen tree not far from the alligator, and rich flora, including a nopal (indigenous to Florida), surround them. The map's title references nearby DeLand, Florida. The founder of DeLand, Henry Deland, named Lake Helen after his daughter.

Most of the land around Lake Helen was first settled by Florida pioneer James Hutto Prevatt (1818 - 1882), who retired to the region to be a gentleman farmer, founding the Prevatt settlement in 1858. When Prevatt died in 1882, his 340-acre estate was acquired by Henry Addison DeLand (1834 - 1908), founder of nearby DeLand. Deland promptly renamed the lake 'Helen' to endear his 14-year-old daughter, Helen DeLand (1869 - 1956). DeLand imagined a bold future Lake Helen as the 'the prettiest and pleasantest' resort community in Florida and immediately ordered the construction of a the Harlen Hotel, - shown here - a grandiose three-story structure with a two-story wrap around porch set majestically in a lakeside stand of pines. The hotel was completed and inaugurated on Thanksgiving of 1884 - just in time for the winter tourist season. The Harlen was a hub of local social life, as well as a draw for rich northern tourists seeking reprieve from the winter chill. The resort proved popular and became well known for superb sporting life, particularly boating, hunting, and fishing. When a spur line of the Florida East Coast Railroad was extended to Volusia County, even more tourists arrived. Lake Helen remained a popular tourist destination until 1922, when the Harlen Hotel burnt to the ground.

This view was drawn and copyrighted by Loudon Underhill Dodge, part of his practically unknown Illustrated Resorts chromolithograph series. Although undated, the view likely dates to 1884, just as the Harlen was completed. It was printed by the Landscape View Company of Rochester, New York. The Touchton Map Library at the Tampa Bay History Center has another Dodge lithograph illustrating Gillen's Grove in Deland that was likely issued around the same time. Of the present lithograph, the only record we can find is from a February 1942 Old Print Shop Portfolio catalog entry where it was price at a whopping 35 dollars. It is likely this is the same example nearly 80 years later.

Loudon Underhill Dodge (September 19, 1839 - March 26, 1887) was an American businessman and artist. Dodge was born in Bayside, Queens, New York. In 1852 he is recorded as a student at the Flushing Institute. He served in the New York National Guard, D Company 74th Regiment, until 1863, when the company mustered out. By 1864 he had relocated to Buffalo, where he worked with the lithography and boardgame publisher Sage, Sons and Company (1862 - 1876). By 1872, he appears in the Buffalo directory as 'paintings' - either an art dealer, or a painter, or both. In 1867, Dodge placed an advertisement in the New York Daily Herald seeking a map canvasser. He appears in the 1874 Rochester City Directory as an ice salesman. An advertisement for his business Spring-Fountain Ice, appears later in the directory. In the late 1870s, Dodge operated the Delaware Avenue Omnibus Line in Buffalo. He also published a short-lived weekly newspaper called the Saturday Bulletin and Review that folded in January 1882, having been defrauded by the failed 1881 State Senate candidate Harvey J. Hurd. After his newspaper failed, Dodge spent several years traveling, creating the 'Dodge Art Publishing Company' and the 'Landscape View Company' to issue chromolithograph views of Florida resorts. This series, known as Illustrated Resorts, were based upon his own paintings done c. 1882. They include views of Lake Helen, the St. Johns River, St. Augustine, Jacksonville, and Palatka. In 1885 he is located in Rochester, New York, where he appears as a 'lithographer.' Dodge died in 1887, after which his wife, Katherine Husbands Dodge (1839 - 1911), continued to manage his business. Learn More...

Very good. One marginal mend away from printed image. Some visible staining, else a bright, attractive image.