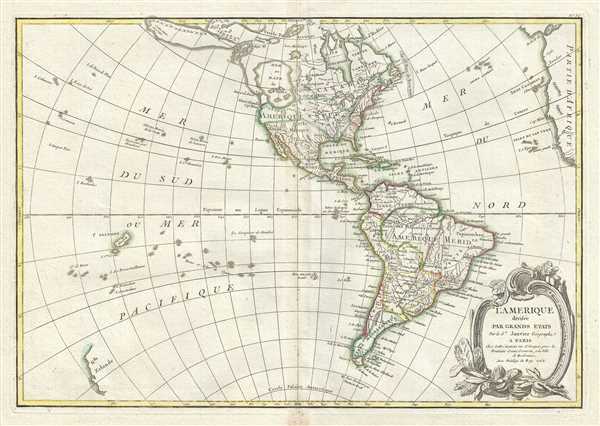 Includes the Muller Peninsula in Alaska and the Sea of the West in North America.

This is an altogether fascinating map of North America and South America by Jean Janvier dating to 1762. It covers both continents from the Antarctic Circle to the Arctic Circle, extends westward to New Zealand and eastward as far as Africa and Spain. This map, which is heavily influenced by the theoretical mappings of Guillaume de l'Isle and Philippe Buache, went through several states of which this is the earliest and possibly the most interesting.

By far the most interesting aspects of this map deal with Janvier's treatment of the largely unexplored Pacific Northwest. A magnificent sea called the Sea of the West or in this case the 'Mer ou Baye de L'Ouest,' occupies the greater part of the northwestern part of the continent. This body of water, alternatively called the Sea of the West or Mer de l'Ouest, was speculated by Philippe Buache and Guillaume De l'Isle in the early 18th century based upon wishful thinking, American Indian stories, and the somewhat questionable 16th century explorations of Juan de Fuca. Janvier gives the Mer de l'Ouest its fullest expression, though he stops just short of connecting it to either the network of lakes and rivers extending westward from the Hudson Bay or to the similar network extending westward from Lake Superior.

Even farther to the north we find a striking and exaggerated Alaska-like projection heading in the direction of Asia. This bears some resemblance to the Muller Peninsula postulated around this time based on sightings of the Aleutian archipelago and their misinterpretation as a single land mass. Even more so, given its directional orientation, it bears a significant resemblance to Gamaland or Compagnie Land as imagined by Sanson c. 1705. A note at the very edge of this land mass claims that it was seen in 1741, suggesting either Vitus Bering or Alexei Chirikov. Both did in fact search for Gama or Compagnie land in this year without significant success.

South America is typically well mapped along the coastlines and relatively speculative along the interior. Janvier drops the popular myth of Lake Parima and Eldorado in Guyana, but maintains the Lac Xarayes as the northern terminus of the Paraguay River. The Xaraies, meaning 'Masters of the River' were an indigenous people occupying what are today parts of Brazil's Matte Grosso and the Pantanal. When Spanish and Portuguese explorers first navigated up the Paraguay River, as always in search of El Dorado, they encountered the vast Pantanal flood plain at the height of its annual inundation. Understandably misinterpreting the flood plain as a gigantic inland sea, they named it after the local inhabitants, the Xaraies. The Laguna de los Xarayes almost immediately began to appear on early maps of the region and, at the same time, almost immediately took on a legendary aspect as the gateway to El Dorado.

The lower right hand quadrant is dominated by a decorative title cartouche depicting some of the flora of the continents. This map was drawn by J. Janvier and included as plate no. 31 in Jean Lattre's Atlas Moderne.