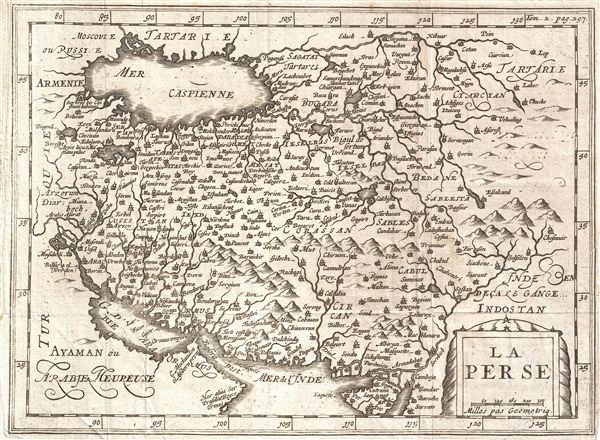 An uncommon and unusual map of Persia issued for Martineau du Plessis in 1700. Covering from the Capsian Sea to the Persian Gulf and from Armenia to India and Tartary, this is most likes a re-engraving of Kaerius' c. 1628 map of the region. Cartographically this map is most notable for its misorientation of the Caspian Sea, an error common to maps of the 16th and 17th though rarely the 18th century. This edition was prepared for Martineau du Plessis' Nouvelle Geographie, published in 1700.

Pieter van den Keere (1571 - c. 1646) was a Dutch engraver and cartographer active in London and Amsterdam in the late 16th and early 17th centuries. Keere, who is alternatively known as Kaerius or Coerius, was born in Gent, the son of printer and type founder Hendric van den Keere. Religious persecution in the Low Countries forced Keere, with many others, to take refuge in London, where they established themselves. There Keere married the sister of Jodocus Hondius, also a refugee in London, and it was most likely through Jodocus that he mastered engraving and mapmaking. Keere is responsible for numerous maps, most of which are associated with the Hondius firm. Some of his most notable works include numerous county maps of the British Isles that were later compiled into Camden's Britannia. Keere also engraved many of the maps included in the Jansson Atlas Minor. Learn More...


Martineau Du Plessis (fl. c. 1700) was a French geographer and schoolmaster from Fontenay, possibly Fontenay-le-Comte. He is best known for his multivolume geography, Nouvelle Geographie issued in 1700. Little else is known of his life. Learn More...